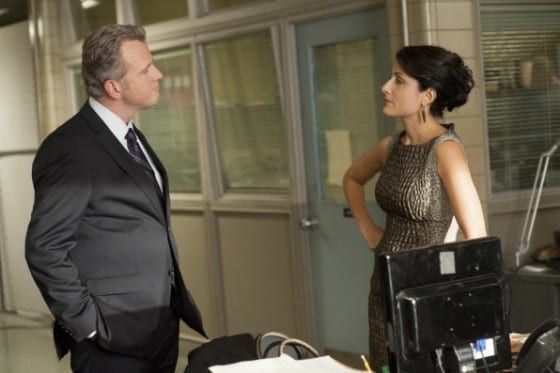 How does a writer go about writing a suspenseful, mystery drama? Alfred Hitchcock used to have a theory of surprise versus suspense. He believed in letting his audience know that danger was around the corner, unbeknownst to the protagonist, so that the tension would inevitably rise with each turn the character took. Other writers take the route of instant gratification—just flat out shock your audience. It’s the outcome that at the time seems incredibly surprising, until later upon reflection where you can see where the clues were lined up all along. This week’s episode of Elementary half-heartedly coasted between both options. They kept allowing the audience snippets of information, a suspect here, a dead man there, to keep the interest level up, yet the clues are so all over the place and so jumbled that it’s difficult to follow the plot of the episode, especially when most viewers were very likely able to guess the killer in the first thirty minutes of the episode.

I’ve commented on the lackluster cases before and how while they’re not necessarily gripping, they’ve gotten better and are typically easily ignored when the character moments and chemistry overshadow them. In an episode, however, where the main focus is the procedural portion and the characters take the back seat, the execution is crucial. This week while not awful was a definite weak spot after run of very well-crafted episodes. The crime fell flat.

There’s nothing wrong with filler episodes. Not every episode in a season, especially in a season that runs as long as twenty something episodes, needs to be an “important” installment. It’s understandably difficult to keep a concise and tightly wrapped storyline without any deviation from main plot points. What I ask is for the filler episode to at the very least still be entertaining in order to sustain interest. “The Long Fuse” almost did this because as usual the character-driven moments and the growth between Watson and Sherlock is so elevated in terms of quality over the crime aspect, and we got less of it than the particular plot deserved.

We start off with Watson trying to talk to Sherlock about possible sponsors for him once her six weeks as a sober companion are up. She tells him that while he won’t need the continuous supervision that she’s given him he’s still going to need aid, a person who understands what he’s been through. He dismisses the thought, almost entirely ignoring her, saying that he never needed a babysitter and won’t need one now.

It was a nice way to remind viewers that technically speaking, Watson’s time with Sherlock is temporary. Obviously the show isn’t going to separate the characters but it proves to be a welcome reminder. Now Sherlock has a stake, although he’d never willingly admit it, and it’s his to lose.

Over in another part of the city there’s a beeping going on within the walls of a company building. The workers pay no mind to it and go about their day despite the fact that television and movies should have taught them that ominous ticking sounds equals bad news. Their nonchalant attitude comes back to haunt them as moments later a bomb goes off, killing two people and injuring others.

Sherlock and Watson are called to the scene where Sherlock makes a quip about how Watson won’t miss this once she’s gone, “this” being the death and destruction. She agrees that she won’t, and it’s obvious that Sherlock is put out by this response.

Among the debris Sherlock finds what he believes to be the trigger of the bomb: a pager.

We cut to later when Sherlock is being forced into a meeting with a potential sponsor. Sherlock is nonplussed and when left to his own devices, interviews the poor man in a hilarious and over-the-top manner and leaves immediately after one answer. He complains to Watson that the man wouldn’t have worked at all, would’ve let Sherlock subject himself to whatever chaos he caused, and would have him “reciting the serenity prayer.” He doesn’t want to be preached at.

Back on that case Captain Gregson has found a man suspected to be the bomber. Sherlock takes one look at the suspect and isn’t convinced. He tells Watson that building a bomb is a detailed exercise that takes precision and patience. The man who’s being interrogated has a watch that is behind, and his fly is down. This isn’t a man with the organizational skills to effectively make a bomb and attention to detail is something that Sherlock excels at.

When questioning the man they realize that he did in fact press the trigger, but he did so accidentally. The bomb in question was made four years previous and had been sitting there until now.

This is where the plot gets jumbled and the names of the suspects seem whirl by. After potential killer number more there are two more, a retracing of steps back to the first, a grotesque death and then an obvious outcome. The bomb was set off in 2012 but they need to find who built it in 2008.

Sherlock and Watson visit a Public Consultants company they believe may have been the initial target four years ago since that is where their old office space used to sit. They talk to the head of the department, Heather, played by guest star Lisa Edelstein (of “House” fame) about why their company may have inspired a planned attack. She tells them that a while back that had an environmental safety and control group angry with them a while back for some issues the company had.

Watson lets her know it was because of the company dumping oil into the ocean that probably did it. It’s a small, insignificant to the plot moment, but it’s one of my favorites because it’s another insight to Watson’s character. She’s eco-friendly and sassy about it. Who knew? As nice as it was it just made it more apparent that Watson, and Lucy Liu especially, deserves some wider development from the writers. Robert Doherty has a commanding screen presence on his hands and he should utilize that more. I can only hope there’s some more Joan Watson backstory heading our way.

The two end up at another AA meeting where once again Sherlock is clearly paying zero attention. We learn that Watson has twenty-three days left with him to be exact and he needs to seriously consider picking a sponsor for himself. He looks up, aware of his surroundings for a moment, and picks the young man speaking currently as his pick. Watson doesn’t understand why but goes along with it anyway.

Due to Sherlock’s excessive television watching and memorization he remembers something that leads them to another suspect. Why? Beats me, the show wasn’t that clear in their explanation.

It leads to one of the funnier moments of the episode. Watson meets Sherlock on the top of their building as he’s experimenting with explosives.

“What did those balls ever do to you?”

He’s using tennis balls as a means to test different types with his own concoctions and to try and narrow down potential suspects. He comes to the conclusion that the bomb in question was made with potassium chloride, which rules out the man currently in lock up.

Aesthetically this scene is gorgeous. Director Andrew Bernstein (who’s previously worked on shows such as Parenthood and House M.D.) makes great use of the New York City skyline and pits both characters ahead of it as, at moments, merely outlines. The two stand above the city in which they’re constantly investigating and wandering around.

Watson meets the new potential sponsor Alfredo, played by Ato Essandoh, with Sherlock nowhere to be seen. She apologizes profusely and he tells her that it’s fine and that it’s all about patience with individuals like Sherlock. He says he thinks he could do a very good job, but Sherlock has to let him.

It turns out that Sherlock is back at the Consultants Company meeting up with Heather again. He calls her out for flirting with him and says that while he’s flattered and sexually attracted to her as well, that’s where it has to stop with him, it’s just the way he is. It is very awkward, very funny and a very Sherlock thing to do. It also alerts us immediately to the fact that Heather is the killer. She wouldn’t be asked on the show to simply flirt and be turned down by Sherlock.

A past missing employee leads Sherlock and Watson to the house of the missing man’s wife where they learn that he is in fact deceased. Worse, his corpse has been stuffed into the walls of his house. It’s disturbing and one of the truly shocking images of the show.

This allows them to discover a video that has Heather as a past prostitute, sleeping with the man we’ve just discovered is dead, Pradeep. This clicks everything into place for Sherlock. Once Heather rose in status and became Pradeep’s boss he wanted to use their past connection as blackmail. It worked for a while as he continued to receive payoffs and raises until it became too much for Heather. She first planted the bomb, but when it didn’t work took matters into her own hands and did the killing in his own home. She is convicted.

This ends the boring portion of the episode.

It’s a shame that the procedural portion pulled so much attention this week considering that the subplot involving Sherlock and Watson’s future plans were so much more interesting. Alfredo turns up at their door for a home visit with the hope of getting on Sherlock’s good side. He may be one of the better additions to this case thus far.

As Sherlock contemplates that, Watson tells him that she’s beginning to realize that he’s showing forms of separation anxiety and that no matter what, somehow she will be gone in a few weeks (yeah okay) and he’ll have to deal, but she will do all she can to make sure the transition works.

The face he gives her is so openly vulnerable that it’s hard to understand how Watson could so readily leave.

Nowhere near the best this show can be, but still able to sustain itself with Johnny Lee Miller and Lucy Liu’s chemistry, this episode is a bit of a letdown. By the looks of it, next week will give us a much more entertaining episode to dig in to.