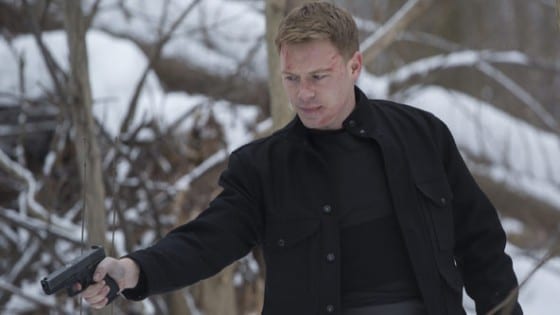 The Blacklist is a mean, spiteful, evil little show. It left the last episode on the massive cliffhanger reveal that Tom Keen is actually a sketchy agent spying on Elizabeth and not the unfaithfulish hipsterish schoolteacher he was pretending to be. This, of course, was not out of the blue by any means, but it was still a huge shock and a game-changer. So, Blacklist followed it up with a week off, making us wait two weeks to see where things go from here. We start the episode with Elizabeth still in the dark, but Elizabeth lives her life in a constant state of confusion. But now the audience is, and the stakes are therefore much higher. It’s the biggest step we’ve had in the mythology since Red was revealed as not Elizabeth’s father (which is barely a step because, honestly, who actually believes him? No one? Yah), and it’s therefore a refreshing burst of energy of the at-times convoluted story.

So, after two weeks of waiting to see the continuation of that scene, we start the episode, not on Tom and Jolene/evil lady, but on a Japanese prison, which is a bit of a letdown. Actually, it’s a huge letdown! C’mon people. This is the first time ever I have actually wanted Tom on screen, and now he disappears?

A man, Mako Tanida, escapes from the prison, and shows up at an FBI agent’s temporary home in Japan with an uncomfortably large blade. Explaining that he was collateral damage in the hunt for our dear Raymond Reddington, he attacks the agent. There’s a lot of cheesy dialogue in this scene, with Tanida going on about honor and humility like he’s competing with Prince Zuko (free cookies to anyone who got that reference). He gives him a sword to stab himself with, which is the “honorable” thing, and, in order to save his family, the agent does it. There’s a nice guttural death sound effect and everything.

Back home, Tom finally shows up, coming home to find Elizabeth chatting it up with crazy Jolene lady. Awkward. She’s apparently trying to move into the neighborhood. You could cut the uncomfortable squirming tension with a butter knife.

Ressler’s at the agent’s funeral, looking sad and pouty and adorable, despite having Audrey as his date. The other agents at the funeral think Reddington is responsible, so Ressler asks Elizabeth to set up a meeting with Red for him. Surprised, she responds that Red is actually looking to speak with him, as well. Assuring Ressler that he didn’t murder his friend, he tells him about Mako Tanida and his escape. Ressler suggests that the man double-crossed Red and therefore he wants Tanida taken out. “There’s a thought”, Red says with a smirk. “But for the moment, the scalp I’m worried about is yours.” No! He has such a nicely styled, blond scalp! Lots of product and blow-drying went into accessorizing that scalp! Just as Red issues his warning, Tanida is entering the United States on a fake passport, telling the woman at customs that he’s visiting for “a reunion with some old friends.” Cue up the ominous music.

Not long after, he attacks another member of the task force, saying, “You don’t remember me? You will.” The guy is basically a bad cartoon villain.

Ressler and Malik brief the team, explain that after Tanida was arrested, his brother took over and expanded the man’s criminal empire. When the body of the task force member is found, Ressler heads off to move Audrey to a safe house. Clearly none of these people watch TV, cause it’s when the characters decided to move to the safe house that you know they’re so going to get attacked.

Meanwhile, finally returning to the conversation from the cliffhanger, Tom sasses Jolene lady for coming to his house. She tells him that Berlin is having doubts, whatever that means. He counters that he was selected out of a wide range of candidates for this job and that he’s kind of been busy dealing with Red uprooting his peaceful, duplicitous existence. He wants to know who put the cameras in their house and shows Jolene his serial killer billboard tracking Red and Elizabeth. Do people actually have these things in real life? They seem to make no sense and just use a lot of red string ineffectively. I kind of want to make one, just to see how it goes. Unfortunately for the two of them, they’re being watched and photographed.

Meanwhile, Ressler succeeds in totally freaking out his girlfriend by pointing a gun at her thinking she’s an intruder and then frantically rushing her into the car. Before they can make their escape, his car is hit, wounding Audrey in an extremely violent, bloody way. As Ressler fights Tanida, the criminal is able to get a shot off and hit Audrey in the stomach. While Tanida flees, Ressler holds her, falling apart as she dies. It’s really quite heartbreaking, and Diego Klattenhoff and his big blue eyes knock the scene out of the park.

Harold tells Ressler to sit the search for Tanida out and let them find him, to which Ressler agrees. Harold somehow buys that, which made me horribly embarrassed for him.

Instead of being a good agent, Ressler does the obvious thing and meets up with Red. “Searching in the desert for a drop of vengeance to slake an unquenchable thirst is a lonely walk, friend,” Red tells him. Ressler is unwilling to give up on his mission, however, so Red directs him to an underground hospital where Tanida’s injured men are likely to be. After some gun-related negotiations, Ressler is able to get Tanida’s location out of one of these men.

Meanwhile, Red attempts to have Jolene picked up, but Tom saves her with mad ninja skills that he apparently has. They squabble and fight in a far more interesting way than he’s ever done with Elizabeth, and even though I hate him and they’re both mysterious and evil, I’m totally shipping it for a few minutes. And then he has to go ahead and strangle her to death and kill all the romance.

Well. That was shocking.

Elizabeth questions Red about Ressler’s location, criticizing him for helping with the man’s angry quest. “He’s not like you. He can’t just murder somebody in cold blood and come out of it okay on the other end,” she snaps at him. “Nobody can murder somebody in cold blood and come out okay on the other end,” he replies. Sometimes I feel like Red has layers of self-esteem problems hidden under that cocky facade. Elizabeth mentions Tanida’s brother, but Red tells her that the man is dead, and therefore not running his brother’s empire in his stead. After reviewing the case with this new information, the agents discover that on the day Tanida was captured and his brother apparently killed, an American federal agent was also with them. That federal agent? The fourth member of the task force. This is basically the dumbest plot twist ever, and doesn’t flow well with the episode, but whatever.

Coincidentally, Ressler just so happens to have stopped by the house of this man, who goes by the name Bobby Jonica, and taken him along for Tanida’s capture. The two of them capture Tanida and drive him out into the middle of nowhere, while the killer taunts Ressler about Audrey’s death. He then explains that he is attacking the task force to get revenge for his brother’s murder and not for his own arrest, and causing Bobby to pull a gun and crash the car as Ressler figures out the other man’s deceit. As Ressler tracks the fleeing agent through the woods, the FBI, in turn, track Ressler to a cabin he owns where had planned to take Audrey for protection.

Ressler basically falls apart as he points a gun at his friend, horrified by the realization that he reunited with Audrey because of Reddington, his nemesis, and lost her because of his best friend.  He’s so upset that he basically turns into Tanida, telling Bobby to kill himself with a knife he gives him and “do the honorable thing.” Elizabeth shows up to talk him down, and Ressler snaps back “What if he killed Tom? What would you do?” Ummm, probably nothing, but I get what you were trying to do there, Ress. There’s a lot of screaming, and for a minute it seems like Ressler will kill him, but he unloads his clip into a snow bank. As Ressler walks away, Bobby stabs himself with the knife, which I guess isn’t legally Ressler’s fault, but sure seems like Ressler’s fault. Meanwhile, Tanida has escaped, which also kind of seems like Ressler’s fault.

Still, it’s impossible to stay frustrated with him when he returns home to find A PREGNANCY TEST IN AUDREY’S THINGS. Oh my god. Poor Ressler. They’re really twisting that knife in there.

As the episode ends, Red watches a ballet of Swan Lake that he heavily sponsors because apparently his daughter was once in the show. This part seems very out of place with the episode. It’s juxtaposed with a note from Red explaining to Ressler that he understands what he’s going through, but it still seems rather disconnected. Tanida’s head in a box accompanies the note!!!

This week’s episode was enjoyable, but frankly had too many stupid moments, like all of the ones involving Tanida and the twist at the end. Not bad, but not the best this show can do. Still, with not one, but two surprise deaths, the episode still had that wild Blacklist feel that makes it so fun.