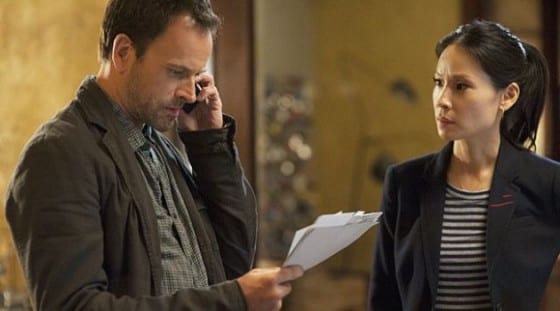 Sherlock (Jonny Lee Miller) and Watson (Lucy Liu) are on the case to find the “Angel of Death.”

The first five minutes of an episode can say a lot of the hour that follows. Will it be a case of endurance or enjoyment? Whether they ease or jump straight into the action, it’s the level of interest that they manage to inspire in those first few moments that can determine the quality. Elementary nailed its first five minutes. It began with a shot of Sherlock straddling a body in the morgue, strangling him. All is not what it seems, as it often is, and he is simply doing so for science. For what? Who knows? But that simply added to the humorous introduction to the episode that was well-paced with just the right amount of an exasperated Watson. Just as they’re leaving they notice another, fresher let’s say, body lying on a table. It’s not going in for an autopsy they’re told, because he died of a heart attack. Sherlock quickly dismisses that and says that he’s been murdered.

And roll the opening credits.

Now, this was a very good hour of television. There are three big reasons as to why this episode worked so well on so many notes.

Number One: The storyline was top notch and they’ve fixed the glitches in the cases.

After Sherlock realizes that the man has been murdered he begins a search into the hospital’s background and finds that this isn’t the first time that the hospital has had such a mishap. They’ve had a staggering amount actually. The killing pattern of the murder is one full of sick, terminal patients who were nearing the end of their lives. The killer was an “Angel of Death,” that would arrive late at night, speak to the patients, and then administer a drug that would kill them peacefully. Sherlock and Watson compile a list of doctors who could be the killer.

Dr. Baldwin is their first suspect. (David Harbour, who you may know as being one of the few likable characters on The Newsroom.) The audience will know from the beginning that he’s going to become a key player in the case, however, they don’t know in what capacity. Here’s a new, significant character brought in for just this episode, so yes, you can assume that he plays a part. So no matter his excuse for not being the killer—he’s too disinterested in his patients to wish them a peaceful death—and, his alibi that he wasn’t even in town during the second to last death, he’ll return.

Sherlock goes through his twenty-three suspects and only one truly stands out to him, a man who appeared during his interrogation to be agitated and on edge. With help from the police, Sherlock catches him standing over a patient. The problem being that rather than giving drugs to the patients, he was taking them for himself, stealing morphine straight from the dying patient.

Not a killer, but at the very least they’ve caught a scumbag.

Despite his annoyance in himself for not catching the fact that he was a drug addict, failing to notice signs that he has experienced himself, Sherlock still goes to the interrogation when the addict decides he will tell him and Captain Gregson all he knows. Before he hadn’t wanted to say anything since it would incriminate him as well. He tells them about how he could hear the killer speaking to the patients.

His information leads them to the janitor, played by David Costabile (Now known most famously as Gale from Breaking Bad). They found the drugs in his apartment and now all they need is for him to confess. He tells them that he killed them as a sign of mercy, as a way to alleviate their pain and send them away to freedom and peace of mind. He’s a great antagonist because he likens himself to a God-like figure, allowing himself the power to determine who gets to die; he being the voice of hope in the patients’ head, the one will end their suffering.

Juxtapose this with the motives of Doctor Baldwin, who like I said, is back again. While he wasn’t the Angel of Death, he knew of the man and what he was doing. So after a mistake he made that would have led to him losing his medical license, a mistake that could be easily rectified, he instead changed the patient’s diagnosis, saying that she had a condition that would lead to her inevitable death. The Angel of Death saw this and she became his next victim. Dr. Baldwin acted out of greed, arrogance and the idea the one life isn’t worth the thousands he could save with his license still intact.

Two men who sought to kill, both for entirely different reasons.

2. The development of Sherlock and Watson’s friendship:

One of the best things that this show does consistently is its development of the duo’s friendship. Five episodes in and they are best friends who spend nights soul-searching? No, of course not. They are, however, reflecting how two individuals who live in close proximity every day begin to grow as a unit, and in this case, a team.

Watson shows great restraint as she accompanies him to the hospital, despite the fact that it puts her on edge being in the place she used to love so much. She disguises this with her having to be there because of being his sober companion, but an audience will get the suspicion that she’s beginning to enjoy working on these cases with Sherlock.

We begin to see how useful Watson is to Sherlock. While he’s highly knowledgeable, Watson has the upper hand in terms of medical information. As she tells him, they’re in her ballpark now. She assists him throughout the entirety of the episode, noting when a patient has been misdiagnosed, telling him how long the drug of the killer’s choice would take to kill the patient, and where the doctors keep their information about when and where drugs were stolen. This is them becoming a team, the team from the novels who worked side-by-side and gained from one another. But it’s happening subtly and it’s happening slowly, rather than forcing the friendship for the sake of easier plotlines. They bounce ideas off each other.

On top of that, we’re beginning to see a Sherlock that appreciates her presence, who genuinely is impressed with her help. It’s a development that seems genuine, rather than forced.

Speaking honestly as a fan of every Sherlock Holmes incarnation, the Watsons are typically underdeveloped and overshadowed by the enigmatic, brilliant Sherlock Holmes. So rarely do fans glimpse the intelligence of Watson and the usefulness to being anything other than a bumbling admirer. For an episode or two I feared the same for Lucy Liu’s version, which would be a terrible disservice to such an engaging actress. I was proved wrong.

In this week’s episode “Lesser Evils” viewers learn that she was suspended for only a few months and had been welcomed back, but she no longer trusted her abilities and let her license expire.

She has an accidental meet up with an old colleague and through the subplot helps save her patient’s life, noticing something small that her colleague had missed.

She stands on her own. She’s the one who finds the missing link to this week’s puzzle for Sherlock who is portrayed to be highly intelligent and shows it rather than audiences simply being told. She is played marvelously by Liu. Although she harnesses her own inner demons, she never plays Watson as being victimized or fragile. Here’s a woman who has made her mistakes in life and now chooses to face them head on rather than running away from them. She’s on Sherlock’s level rather than looking up at him with blind faith. She seems him as a human rather than a walking, talking brain. Liu is wonderfully stoic and Watson in this episode is finally explored.

Of course there are other reasons to love this episode. Such as the humor that Jonny Lee Miller gets to play as Sherlock this week. Or, more importantly, the way the ending wasn’t neatly cleaned up. Both characters still share an array of faults, both are outsiders looking in, both are still grappling with personality traits that they have no chance of changing. Such as life goes, not everything is fixed in the end yet people go off to fight another day. The thing that makes this version of Watson and Holmes so fascinating and new to watch is the fact that they’re survivors.

It was another great week and hopefully the pattern of consistently getting better each week continues. If they keep it up in this manner CBS may have a show worth celebrating.

For Breaking Bad fans, does anyone else get the sense that if Gale had had a “happier” ending, this janitor character is who he could have become? Or is it just me?

I’m loving the fact that Sherlock is consistently styled to appear like the least fashionable Holmes we’ve ever seen.