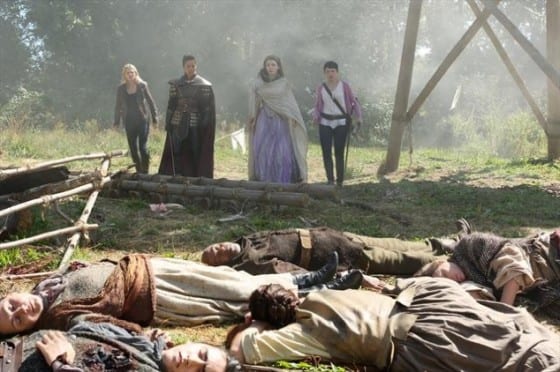 So far, season two has held more mishaps than victories, lacking the promise that the beginning of season one had. The magic spark that compelled viewers for round one has dulled. Characters are being used sporadically, with newbies sharing more screentime than the regulars and with favorites such as Snow and Regina disappearing from episodes entirely. To get the show back in the right direction, they need to focus on what storylines they want illuminated, they need to make sure Charming’s screentime is not all spent with Henry, they need to make sure that characters like Red and Archie who showed so much promise last season are given time to grow and most importantly they need to figure out what kind of show they want to be, because they seem lost.

For this episode, while they still seem to be simply treading waters in terms of storytelling, they at least hit their stride with a bit more aggression. However, a Frankenstein-themed episode for the week of Halloween? Really? What, did they just decide that Dr. Whale would be him just for the sake of marketing?

Oh well, it worked I guess.

The show got something very right tonight. They put the three best actors, arguably, Sebastian Stan, Robert Carlyle and Lana Parrilla, all in the same scenes for a great majority of the episode. As long as the acting is good, audiences can hopefully ignore the camp.

The first narrative of the night is with Emma, Snow, Aurora and Mulan, who are all trekking their way back to the campsite. Upon arrival, they see all of the members of their party, lying on the ground dead, all of their hearts missing. Snow realizes that this is the work of Cora and her dark magic. When deciding what they should do they find another man who’s alive. It’s Captain Hook from last week, under the rouse of a party member, in order to trick them and help Cora.

While discussing what they should do now, Emma interrogates Hook, telling him she knows a lie when she sees one. He tries fooling her but she doesn’t buy it. I love it when the writers remember that Emma is very smart and lets her run with it. She’s a very strong female character and it’s nice to see her besting Hook.

They end up tying him to a tree to get answers out of him, hoping the fear of a helpless Ogre attack would prompt him into honesty. Hook finally breaks and gives away his true identity and plan. He was to travel with their group and gain information on Emma and Snow that would allow him to learn about Henry, so that Cora could have it all at her disposal. He tells them that she could still possibly have a way back into Storybrooke and if they want to beat her, they’ll have to rely on him. They agree, reluctantly, knowing that they may very well be lead into a trap. He tells them that they need to find a compass. He leads them all the way to the forest’s edge, till they come across a beanstalk that stands among the clouds. He tells them they need to climb it, find the compass, and not be killed by the giant.

I’ve been waiting a while for the beanstalk to show up. So far there are very few fairytales that the shows left out so it was only a matter of time. I’m assuming they waited so long due to budgeting issues and the cost of CGI. However, even the season two budget isn’t selling me on that beanstalk.

A plus side is that Hook is infinitely better this week. He has all the sashay and smug delivery that he should have had last episode. He was cocky, flirtatious, and fun to watch, everything that Hook should be. He and Emma share palpable chemistry and I’m hoping that show creators Adam Horowitz and Edward Kitsis realize this, and force the two into more scenes together as long as Emma is stuck in his world.

In the flashback—or “Shameless Excuse for Character Exposition Of The Week—we get Regina just as she’s beginning her lessons with Rumpelstiltskin. His idea of a lesson plan is to freeze a unicorn, take its heart and then kill it slowly and painfully. I would have been totally fine without hearing the tortured yelps of a dying horse, thank you. Regina sees some issues in this way of learning. She doesn’t want to use magic for evil, she wants power yes, but she would rather use to try and bring happiness back into her life. Such as Daniel, the man her mother killed last season and apparently was the beginning of Regina’s undoing, remember?

Rumple tells her that there is no way to bring back the dead so to just give up on the idea. However, when he’s conducting a meeting with The Mad Hatter she overhears talk of a man that could help, and runs off with Hatter in order to meet him. The Mad Hatter tells her that people say what he does is magic, but to him it’s something else.

Another pair that has a great, great, amount of chemistry? These two. Sebastian Stan and Lana Parrilla work wonderfully together and seem to intercut each other’s past storylines quite a bit. Stan in particular is one of the best casting decisions this show made, fully embodying what the Hatter would be like—unhinged, sarcastic, and plotting.

They meet the man who says he can restore Daniel to life. However, there’s a catch, he needs a human heart that still pulses in order to do the work. Regina says she refuses to do that sort of black magic, but she knows where they can get one all the same, Cora’s vault of them. Literally, Cora has an underground vault, filled to the brim, with the glowing heart props. The group venture down and take one, and go on their merry way of creating zombies.

They set up camp in an open field, where lightning surrounds them and Regina and the Mad Hatter watch from afar as the Doctor tries to work his wonder. He comes out a failure though, and says he was unable to revive him. This is apparently Regina’s final breaking point, her total and utter hopelessness that the only thing that would ever make her happy is gone for good, and she goes back to Rumple. Now though she easily takes the heart of a poor, unsuspecting girl, and is dressed in black and leather, just in case any audience member wasn’t clear that she is now pure evil.

It appears though in the end of the flashback, that Rumple, Hatter and the Dr. Frankenstein had fooled her all along, just so Rumple could make sure she was ready and devoid of enough happiness that she would be easier to mold.

In Storybrooke the plot is more or less the same as the flashback, however we’re privy to more character development. We learn from a session between Regina and Archie that she has tried to stop using magic, but it’s been a struggle. Dr. Whale (Frankenstein) confronts her about the other worlds and whether or not they’re still intact, but she dismisses him. He decides that in order to get on her good side, he’ll bring Daniel back for real.

He does though, however, like all Frankenstein Monster scenarios we see, the individual brought to life is never their complete, functioning self. Regina finds Dr. Whale lying in the operating room with his arm ripped off and brings him to the hospital.

Charming confronts her there; sure she’s had something to do with it. She tells him he’s wrong and all she wants to do is find Daniel now. She says it’s like when Charming woke up from a coma and walked to where he and Snow used to meet, she thinks Daniel is going to the stables where he last saw her. This sets him into motion because Henry is there; because this week’s bonding moment was teaching him how to ride a pony.  The two of them race over to save Henry from Daniel.

Once there Regina tries to appeal to Daniel’s heart and love for her but all he can let her know that is if she loves him, let him go, because the pain he’s in is unbearable. He then switches back into monster mode and in one of the more effective scenes of the episode, she freezes him, and then lets him go, killing him once again. Parrilla is fantastic here and I wish that the dynamic of Frankenstein and his monster could have been given more time of exploration.

Although it seems we’ll get plenty of past information of Frankenstein’s previous mistakes. He goes to Rumple to magically put his arm back and while there speaks of a brother who had tried to bring back and how it had ended badly. We’re then given a black and white (of course) flashback where we see his brother’s arm, all stitched up and grotesque begin to move. Even Igor is there.

It wasn’t a bad episode, although the pacing was shockingly slow. I remember looking at the clock twenty minutes in and being horrified at how much time hadn’t passed. However, the show did some things right. It had a sense of adventure with Emma and Hook, a good emotional connection with Daniel and Regina, and the Mad Hatter, who always makes things better. It could have used more Red, more Archie and more Emma, but hey, you win some you lose some.

The one thing I’m having difficulty wrapping my head around is the timeline of Frankenstein. Victor Frankenstein, in classic literature, created his monster in Germany, and then traveled to Switzerland and it took place in the late Georgian era. How are they going to go about making sure his storylines run parallel with the others? Are they going to say that when he jumped into the Mad Hatter’s hat that not only did he jump worlds, but time as well? Or are they going to say that his universe runs in the same time as the fairytales? I can suspend my disbelief to momentous amounts; I don’t know how well I’ll be able to stomach that one though.

The show is figuring it out as it goes along, which historically is not a good idea, just look at how Glee turned out. It needs to find its footing and run with it. It has some strong characters it can choose from and next week seems to a return to form with Emma taking center stage. Let’s all hope it’s a steady rise from here on out.