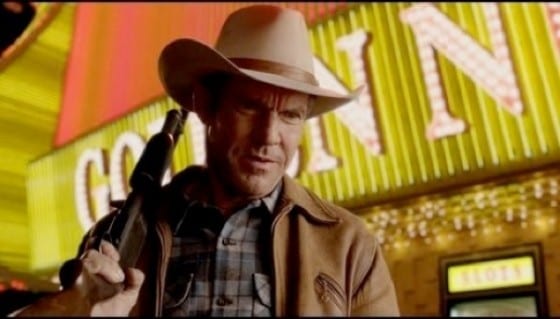 “(Il)Legitimate” was the fourth episode of “Vegas,” and at this point it’s safe to say that the verdict is in. Try as they might, A-listers like Dennis Quaid, Michael Chiklis, and Carrie-Anne Moss just can’t save this show from being a disappointment. This likely-to-be-short-lived series is further evidence that star power alone isn’t enough to carry a television show. (Editor’s note: As of yesterday, CBS has issued “Vegas” a full season.While critically panned, this show is “delivering big audiences and winning performances in important time periods,” according to President Nina Tassler.) You can’t polish a turd, which is essentially what “Vegas” boils down to once you strip away the flashing lights, ringing slot machines and slick fedoras of the 1960’s Las Vegas backdrop.  In “(Il)Legitimate,” Ralph Lamb’s latest case is a hit-and-run murder involving a hotel maid and a union dispute, which inevitably has its tie-ins to Vincent Savino and his dubious plans to conquer the Las Vegas strip.

When the Chicago mob bosses were last in town, Angelo shut down Vincent’s idea to expand the Savoy with new facilities, such as a boxing ring within the casino. Red tells Vincent that he’s sorry to hear Angelo crushed his plans, but the cunning Savino reveals that he’s already moved on to a new idea. He intends to buy The Tumbleweed, a run-down neighboring casino. Once he owns the place, he plans to level the building and construct a new mega-casino that’s even bigger and better than the Savoy. But rather than seeking Angelo’s approval, Vincent plans to carry out the construction by using legitimate money from the bank, only telling Angelo about it when the project is complete. It’s a risky move to hide something from the Chicago bosses, but Vincent is sure that if he presents it all wrapped up with a bow at the end, they won’t be upset about him going behind their backs.

As Savino plans to claim The Tumbleweed as his own, the maids there are in the midst of a union debacle.  In a union meeting, the maids discuss the possibility of going on strike and the fear of possibly losing their jobs if they strike before their contracts expire. One maid, Estelle, stands up and makes her voice heard, insisting that they stand up for themselves and go on strike, no matter what the consequences may be. After her rallying speech, the other maids are swayed and the group decides to go on strike.  When Estelle walks home alone that night, a car comes up behind her and runs her down in the street.

The crime in “(Il)Legitimate” perfectly highlights how predictable and unintentionally funny “Vegas” can be.  Once Estelle stood up at that union meeting and spoke out, we all suspected that she was a goner. Then, to confirm our suspicions, she’s seen walking down a dark street, in Las Vegas, all alone.  So when the car comes speeding up behind her and runs her down melodramatically, it’s so hard not to laugh (this reviewer certainly did).  There shouldn’t be anything funny about vehicular homicide, but the stunt looks so staged and painless for Estelle that it’s simply amusing when she’s dead by the time she hits the pavement.  The commercial break comes directly after the hit-and-run, as if to say, “Oh snap, what a cliffhanger!  Can you stand waiting through a minute of commercials to find out what happens next?!”  Well, yes actually, we can.

On the other side of the break, the Lamb Gang (Sheriff Ralph and his kin) scope out the scene of the crime. They find a patch of blue paint left behind by the car when it scraped against a nearby lamppost, and they find out from Estelle’s maid friends that she spoke out at the union meeting. As expected, these clues lead Sheriff Lamb along a wild goose chase to find the killer in typical crime drama fashion. He spends the rest of the episode following leads and thinking that he’s finally caught the murderer, only to discover that they’re innocent (but luckily each suspect has a new piece of helpful information to further the case along). In this week’s murder case, the evidence eventually points to a fellow maid as the perpetrator, who was jealous of Estelle having a wealthy father and possibly screwing up the union strike for her less-fortunate fellow employees. The sheriff was able to come to this conclusion because the maid took a bunch of photos and mistakenly caught her reflection in a car side mirror. By this time in the 1960’s, had the “World’s Dumbest Criminals” TV show been invented yet?

As boring as the central murder-mystery is in “(Il)Legitimate,” at least Vincent Savino’s storyline is a smidgeon more entertaining. Apparently he isn’t the only mobster interested in The Tumbleweed, as a few Milwaukee gangsters are also trying to make a move on the property as well. Savino encounters a number of violent setbacks in his bid for ownership of The Tumbleweed, which include a drive-by petrol bombing and an attempt on his life.  Luckily for Savino, the thugs that the Milwaukee mob hired to disrupt his plans are some of Las Vegas’ lousiest criminal; the bomb in the casino doesn’t seem to result in anything more than property damage, and the goons who ambush him in a parking garage aren’t able to get a lethal shot off despite being only a few feet from his car. If this is what Vincent’s competition looks like, it shouldn’t be long until he has The Tumbleweed under his control. “(Il)Legitimate” wraps up with a scene in which Vincent sends Red and another mobster to dispose of two head Milwaukee gangsters by gunning them down after they get into a car in an alleyway.  Don’t forget folks—under Savino’s suave hat and killer smile is a man not to be reckoned with!

Is my overall sarcastic attitude about “Vegas” coming through, yet?  Four episodes into this mediocre-at-best series, it’s not looking like anything will be improving in episodes to come.  Every character is a walking cliché, every case is a predictable paint-by-number, and the rest of the show is so melodramatic it’s often laughable. One of the biggest problems here is the procedural format, which has become incredibly unappealing after over a decade of “CSI” and “Law and Order” spinoffs flooding the market.  The real killer will be revealed with about five to ten minutes left in the episode—we all know that by now. But even if “Vegas” broke the mold and ditched this stale formula, there are still too many other issues that need fixing. I’ve yet to warm to Dennis Quaid as a 60-year-old badass sheriff.  Much of the dialogue is hokey and cringe-worthy. Carrie-Ann Moss’ ADA continues to be an obsolete character, only popping in here and there and barely contributing anything to the story.  The list goes on and on.

Putting the overall show aside, “(Il)Legitimate” was another dull outing that was easily forgettable. Each episode of a TV series should leave viewers anxious for the next one, wanting to know what’s next for the characters they’ve come to love (or at least feel something for). This has yet to happen for “Vegas.” Each episode seems as disposable as the last, and “(Il)Legitimate” was no exception.