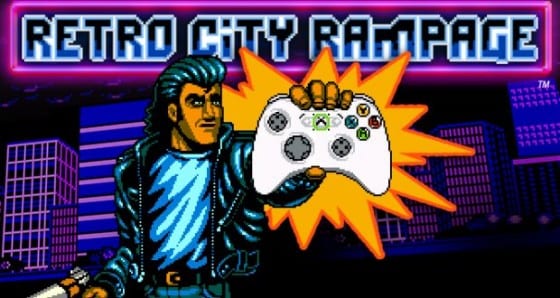 The first time I played Retro City Rampage it was late at night (or at least late for an old guy like me) and the next morning I had to replay the opening scene to be sure I did in fact see what I thought I saw. Yep — that sure was the Mortal Kombat Toasty guy and the Duck Hunt dog within minutes of each other. This, in essence is Retro City Rampage — a love-letter to gaming and geek culture in the guise of an 8-bit adventure game. There are moments here where you’re sure to smile, especially if you come from the time period that fondly remembers the references, but those moments only take the game so far, and the deeper you get into it, the thinner the experience seems.

A bit of a history lesson, Retro City Rampage started its life as true 8-bit demake of Rockstar’s Grand Theft Auto III, but everything changed when Brian Provinciano began adding characters from his other favorite franchises, he knew he was onto something and thus the game proper was born. You’re cast as a two-bit thug (who bears a bit of a resemblance to Claude from Grand Theft Auto III) known only as Player, who becomes a henchman for the evil villain known as The Jester (who himself bears a bit of a resemblance to a famous other clown villian).

The game most resembles its source material as you’re free to do anything you want in the game’s wide open city, but you’ll progress by taking on the game’s fifty or so missions, and that’s where you’ll find the game’s heart, it’s references and odes to other properties.

In a way, Retro City is to games what Not Another Teen Movie and Scary Movie are to their respective genres, its a love letter to a medium that’s sure to make fans that get the jokes giggle. Believe me when I say this though — the game comes packed with these references, and it’s almost impossible to completely get all of them the first go-round, but when they range from Duck Hunt, to Back to the Future and even Christopher Nolan’s Batman films, it’s fun to try.

There does come a time though when you’ve got to step away from the game, as you increasingly get the one note joke that it keeps trying to tell. Retro City Rampage is almost like that one kid in your class that can’t sit still, and won’t stop telling the same jokes. Sadly, the further you get into the game, the thinner the brand of humor gets, and as a result, you’re sure to notice the game’s lesser points. On top of all of the content — and there is a lot, the sad fact is that the core gameplay of Retro City Rampage just isn’t all that fun, in fact it’s very repetitive.

Most missions are simple enough — run in, make a reference, drive, shoot guys, drive away and repeat. There are a few varied mission thrown in, but they’re mostly very predictable and I never thought that I should keep playing to go through the missions, it was more based on the humor — at least for a bit. It’s worse when the game lets its humor get in the way of what could be a great gameplay moment, there were plenty of times while playing that I was reminded of how Family Guy finds it necessary to insert a random cutaway scene rather than writing actual jokes.

Don’t get me wrong, the game has it’s moments, but it tends to shoot itself in the foot when its just starting to gain momentum. Take the game’s save system for instance, in the game’s missions it can be rather unforgiving and that combined with an uneven difficulty spike makes for a frustrating times. There were plenty of times when I was tempted to give up because the save system had me get all the way to the end of a mission, only to be defeated by a suddenly tough as hell boss.

Retro City Rampage is geared towards an obvious crowd and for the most part, they’re going to love it –at least at first. While the game does a great job emulating the style of classic games, it fails to do much else, and when the humor it holds so dear starts to wear thin, it;’s left with little else at all.