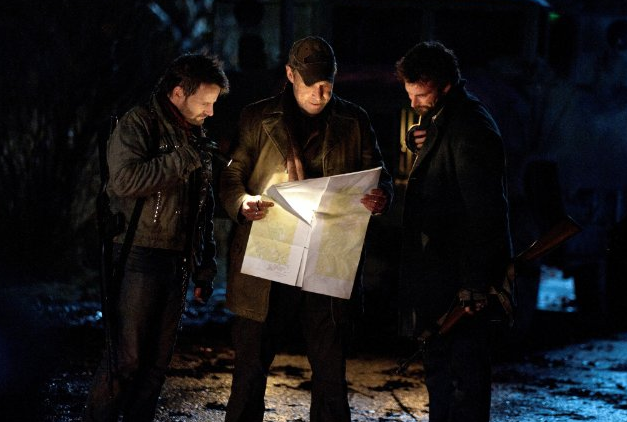 Tector, Weaver, and Tom look at their route to Charleston

In “Death March,” the 2nd Mass continues its journey to Charleston, where they hope to find a colony of survivors that promises the chance to rebuild their broken lives. This on-the-road episode was one of the dullest so far this season. Mostly because nothing of real significance happened at all. The major focus of “Death March” was characters’ back-stories (yawn) and Tom’s continuing struggle to raise his kids in this post-apocalyptic world (nodding off now) with a brief appearance of a meaningless character who came and went in the blink of an eye.  It’s been said “Falling Skies” strives to create dynamic characters, but this episode took that to the extreme and, as a result, bored viewers to tears.

As the 2nd Mass’ caravan rumbles towards Charleston, Tom continues to struggle with Ben’s recent departure.  To add to his worries, Matt gives him a hand-written will just in case he’s killed someday soon.  Maybe all of this business about Tom and his kids appeals more to viewers who have their own children, but for the rest of us it’s getting rather tiring. So much emphasis is placed on Tom and his struggles to raise the three boys that it would be a relief if the writers spent that time focusing on something else for a change.  How long will it take Tom to accept the way things are and get over it?  We want to get back to Tom gunning down aliens, leading the 2nd Mass, and being an all-around badass.  Enough of the moping and crying already.

Bringing up the rear of the caravan are Maggie, Hal, and Pope.  Hal and Maggie are enjoying the ride together while Pope rides along in the bed of the pickup truck they’re driving.  When the engine starts to overheat, the team pulls over to discover that the radiator hose has a hole in it.  Hal goes to fetch some water, and while he’s away, Pope uses his alone time with Maggie to pester her about her relationship with Hal.  He pushes her to tell Hal about her shady past and come clean about who she really is.  Later on, once they’re back on the road again, Maggie finally reveals her dark past—after her bout with cancer, she got mixed up with the wrong people and started doing drugs and robbing people’s houses. Hal is shocked by this news and tells Maggie that he needs time to think about it all and process this new information.

The fact that Maggie had a rough past means diddly-squat at this point.  In a normal world, Hal would definitely have a right to be concerned that Maggie used to do drugs and break into people’s homes. But with the alien invasion and the world in shambles, who cares?  There’s no way Maggie will be getting her hands on some drugs any time soon, and being a thief will only help her when it comes to scavenging for fuel and food.  And regardless of all that, when has Maggie ever shown signs of regressing back to that dark period in her life?  The whole time she’s been with the 2nd Mass she’s been nothing put honest, loyal, trust-worthy, and kind.  Any traces of an addictive personality or a tendency to steal have been non-existent or easily forgotten, which means her confession means very little to her and Hal’s current situation.

Meanwhile, Lourdes is still very far from accepting and moving on from Jamil’s death.  She’s so dramatically different these days, one would think that they had been married for years. She frequently freaks out when tending to patients on the medical bus and then runs away to sulk in a dark corner somewhere. Some fans expressed interest in the way Lourdes’ views have changed (going from uber-religious to ultimate pessimist), but I just find it annoying. How can the audience be expected to connect with her anguish when her relationship with Jamil got about 10 whole minutes of screen time?  By the end of “Death March,” Lourdes seems to have realized her ridiculousness, because she apologizes to Anne and gives her a hug. Hopefully this means she’ll snap out of her doom-and-gloom attitude soon, because every scene she’s in these days is a guaranteed eye-roll.

A literal and figurative bump in the road appears in the form of a harnessed girl that Tector accidently runs over. When Anne checks the girl out, her harness is damaged but she’s okay.  Weaver (ever the voice of reason) insists that they send the girl on her way, but Tom wants her to stay.  Weaver gives into Tom’s request (as always) and the girl is allowed to stay in the medical bus under guard.  While she is chained up, she bonds with Matt Mason, who tells her all about going to Charleston (face-palm) and how she should go there with the 2nd Mass.  But the girl drones on about loving the skitters and wanting to help her brother who is still harnessed.  It isn’t long before her harness reactivates and she busts loose and then runs off into the woods, never to be seen again (doubtful).

The idiocy of this harnessed-girl business was astounding.  First of all, have Tom and Weaver’s memories been completely erased?  Taking in harnessed children have always worked so well for them in the past—that is, except for all of them (Rick, Ben, and Karen).  So why not bring in another one?  It’s incredibly obvious that the writers merely wrote this girl’s appearance in as a way for the aliens to find out about Charleston (through Matt telling her all about their plans).  It’s only a matter of time until Charleston comes under attack and Tom finds out that Matt was the one who gave them all away.  Ugh, friggin Matt.  Why hasn’t this kid been picked off yet?

Another focus in “Death March” was a little bonding sesh between Weaver and Tector.  While they ride together, Weaver interrogates Tector about who he really is, and Tector finally admits that he was a Marine who served in Afghanistan.  Weaver tells Tector that at one point he thought about ditching the 2nd Mass, but he changed his mind when he realized that the people needed him to lead them (except they don’t, because Tom does all the leading through Weaver).  This venture into a character’s past is worse than Maggie’s because nobody really gives a crap about Tector.  Like the recently deceased Boon, Tector is one of Pope’s Berserkers who seems to have seen the light in joining up with the 2nd Mass.  Excluding the past few episodes, we’ve seen so little of Tector that there’s no reason to have any interest in his past, which means his scenes with Weaver in the truck are a bunch of duds.

The only saving grace of this otherwise poor episode was the fact that the 2nd Mass finally reached Charleston.  When they first arrived and saw the demolished ruins of the city, I was seriously afraid that it would mean more endless travelling for the group.  It was odd that Weaver and Tom didn’t express any interest in even exploring the ruins to look for survivors—they just saw the devastated city and figured nobody could be there.  Talk about stupid.  Luckily, Colonel Porter and the Continental Army stop Weaver and the 2nd Mass before they get too far from Charleston, telling them that despite it’s appearance, there actually is a thriving community hiding out there.  Hal, Maggie and Pope catch up with the caravan, and Tom says, “Let’s go to Charleston” as they all walk off into the sunset with high spirits.

Thank God that Charleston is real and not a total fake-out.  The prospect of the 2nd Mass continuing their pointless wandering sounded about as appealing as watching paint dry. Let’s hope this new Charleston plot-line will breathe some excitement and change into the heavily worn format of “Falling Skies.”  Plus, Terry O’Quinn is apparently waiting for them in Charleston, so it can’t be all that bad.

Altogether, “Death March” was a bland and unappealing episode that felt like total filler between last week’s episode and next week’s arrival at Charleston.  There was very little action, the exposition was boring, and the one minutely interesting appearance by a harnessed kid was quick and rather pointless.  If it had not been for the 2nd Mass finally arriving at Charleston and finding hope there, this episode would have been a complete miss. Even still, “Death March” was almost entirely dull and uninteresting.