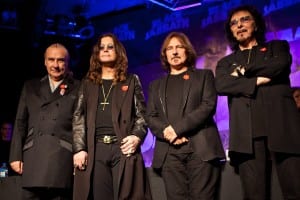 Black Sabbath, the band of Ozzy Osbourne, Tony Iommi, Geezer Butler and Bill Ward, announced on Friday during a news conference at Sunset Strip club, Whisky a Go Go, that they will be performing for the first time in several years at the Download Festival next June as an introduction to their world tour. They also plan to release an album in September.