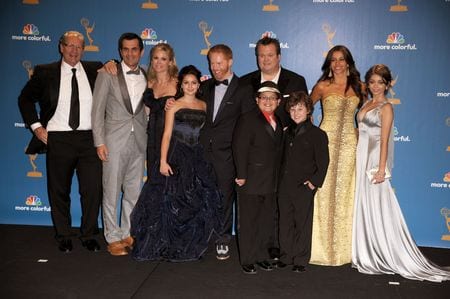 The multiple Emmy-winning adults of “Modern Family” cash in.

The six adult members of the recurring cast on ABC’s insanely popular sitcom, Modern Family, will get the substantial raises hey hoped for, though they settled a bit. Avoiding a lawsuit that Ed O’Neill only recently joined, negotiations have ceased, and the scales have tipped in the actors’ favor. Julie Bowen, Ty Burrell, Sofia Vergara, Eric Stonestreet, Jesse Tyler Ferguson, and the aforementioned O’Neill, will now all be making about $175,000 per episode for the show’s upcoming forth season. As I mentioned, they sacrificed slightly from the original position, $200,000 per episode. For some perspective, the “Friends” were earning $1 million an episode during the end of the show’s run.

“Modern Family” is the top-rated comedy for ABC and the winner of Outstanding Comedy Series at the Emmys for two years running. It has been nominated again, as well as all six of their adult actors (four out of six supporting actor nods went to “Modern Family”). In addition to an increase in wages, the actors have signed on for an eight-season run. It was seven in the prior contract. The lawsuit that was filed last Tuesday is officially dropped, in it the cast alleged that 20 Century Fox Television violated California legislation for binding to a contract of more than seven years.

Ed O’Neill, a TV star before “Modern Family” took off on”Married With Children, was making considerably more than his castrates in the first three seasons. Now, they’re basically on level playing field. His fellow “Family” members will also reap the benefits he previously received—a small cut of the show’s back-end profits. Since O’Neill was already taking a share, his portion will be significantly bigger still. For the other five, each could see their annual earnings escalate to $350,000.

The show’s average draw is approximately 13.1 million, according to the Nielsen ratings. The program also generates upwards of $164 million in ad revenue. After canceling a table read this week, the production of the fourth season is pretty much on schedule, starting filming next week in time for a Sept. 26th premiere.