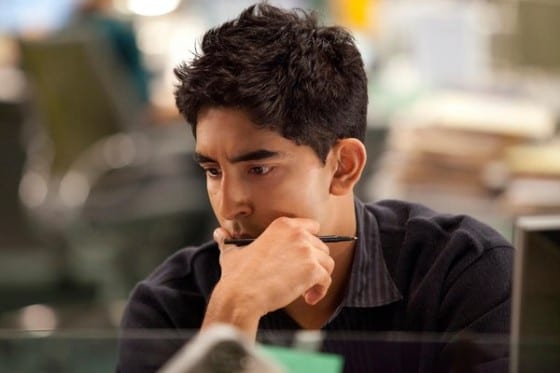 Well, what do you know? Last week I said I wanted to see more about Neal and Sloan, and this episode was quick to deliver giving both secondary characters a strong role in their respective subplots. I had also said I wanted to see women characters who could handle doing their jobs well while having emotions and lives outside the office, but that part didn’t pan out quite so nicely.

The date range on this episode is from February 10-14, 2011, and the big news story of the first night is the Egyptian revolution. Elliott, the host of the 10 PM show, is on location in Cairo, but can’t give News Night much information since he’s confined to his hotel room. Maggie, meanwhile, rushes in to the control room with the news of a teachers’ protest in Wisconsin against Scott Walker’s union-dissolving legislation, bashing Jim in the head with the door in the process.

There’s only one editor on duty to cut together two news packages for the show, so Jim steps in to help with the Egypt footage while Maggie physically runs the Wisconsin package to the control room on a thumb drive. She rejoices in the fact that she didn’t trip over anything on the way there, though she ends up smacking Jim with the door again on her way out. Seriously?

Mackenzie asks Sloan to stick around because she wants to talk to her, but it turns out Mac has done this twice and forgotten that she asked Sloan to wait. She promises she’ll remember this time, though, and turns to confront Will about going seventeen seconds too long on one part of the story, forcing them to cut another one to—then Will stops her to point out that she has to use her fingers to subtract. I ask again, seriously? Mackenzie is supposedly a smart, capable combat journalist and executive producer, yet she can’t send an email properly, frequently goes into hysterics, and has to use her fingers to do basic math. I’m starting to think Aaron Sorkin has a serious problem with actually writing a well-characterized woman.

As they head into the conference room, Mackenzie pulls out her big counter-reveal about Will—he cries whenever he watches the movie Rudy. I’ve never seen Rudy, so it was helpful that the rest of the staff explained the Big Scene that everyone cries at to Jim. Basically, Rudy never made the list to actually play a game of football. So on the last game of his college career, the whole rest of the team lines up to forfeit their uniforms so he can play.

Jim’s actually got quite the gash on his head from his encounters with Maggie’s door-opening skills, but he makes do with Maggie grabbing the first aid kit instead of going to the hospital. Neal comes through in a big way in this meeting since he’s found a local Egyptian man who’s got footage on the ground in Cairo. It would be too dangerous to send Elliott out there, but News Night needs original reporting on the revolution.

Charlie calls a meeting with Will and Mackenzie to discuss the latest TMI gossip piece that will be running. This time it’s not about Will—it’s about Mackenzie. Specifically, it’s about her boyfriend, Wade Campbell. He’s been on the show five times in the last six weeks, and TMI is accusing Mac of using air time to promote him in his political quest to run for Congress. She, however, had no idea about his political ambitions, and is crushed that he used her to get ahead.

The source Neal has found in Egypt calls himself Amen, which means “the hidden one” in Ancient Egyptian. I was relieved at this, because at first I thought the episode title might have been hinting at a religion-centric plot and I wasn’t in the mood to be preached at about religious beliefs by Will McAvoy/Aaron Sorkin.

Neal vouches for Amen’s character by using himself as an example. They both grew up the eldest son of mechanic fathers, and they both are inspired by civilian journalism. Neal, it turns out, was on the trains that were bombed in London in July of 2005. After the dust cleared, he took out his cell phone camera and started filming what was going on and sent it in to the news, sparking his desire to go into journalism. Nobody else on the staff seemed to know his story; everyone fell silent as he talked about the bombing. I get the impression that nobody knows too much about Neal, but I definitely want to find out more. Why did he leave England, for instance? And what about the rest of his family, did they come too?

Mac, who almost forgot Sloan again, needs her help and expertise in economics. Mac agreed to speak on a panel called “Is TV News Equipped to Cover the Economy?” despite having absolutely zero economic knowledge, and now is asking for short lessons from Sloan so that she doesn’t embarrass herself at the panel on Tuesday.

The anchors on the station’s morning show the next day turn their attention to the TMI article about Mac and Wade and call Mac’s ethics as well as her competence into question. The infamous mass email about her relationship with Will is discussed (as if anyone needed a reminder of that), but Charlie quickly shuts it down, practically growling a threat into the male anchor’s ear to go to commercial immediately. Have I mentioned that I like Charlie?

The other Maggie/Jim subplot of the night is about Valentine’s Day. Maggie, who wants to take full advantage of the romantic night Don has planned for the two of them (Don and Maggie, not Maggie and Jim), has brought Jim gifts to give to Lisa as well as an itinerary for their own perfect Valentine’s Day.  Jim is hesitant, because he and Lisa have only been on four dates (and, you know, because he’s a little bit in love with Maggie) but Maggie is insistent, and he caves.

Mackenzie, Will, Charlie and Neal met Amen via Skype, and he agrees to all of their terms and assignments. He even accepts the risk associated with revealing his identity, taking off his bandana and revealing his real name to be Kahled in order to be a credible source for News Night. He delivers big time that night, and the show has great footage and interviews with people now in power in Egypt to air.

Sloan and Mackenzie meet up at a bar to have their first economics lesson. They get sidetracked in a discussion of Will, and Sloan blames herself for Mac’s email fiasco– after all, Mac was trying to prove to Sloan that Will didn’t cheat on her when she sent it. When they get back to economics, though, Sloan gets to deliver her first inspirational nostalgic speech of the series about the Glass-Steagall Act that separated commercial and investment banks. It marked a great period of economic prosperity and productivity in which the middle class rose, we won World War II and put a man on the moon, but it was later repealed. Thankfully, her nostalgic speech was far shorter than any of Will’s sermons to date; I can only take so much preaching about the good ol’ days of America at once.

Elliott, who was urged to go down on the ground in Cairo by Don, has returned to the newsroom alive but very much banged up. Kahled, however is not so lucky – Neal hasn’t been able to reach him for three days, and his satellite phone is untraceable. Neal is frantic about Kahled’s disappearance and feels responsible for him. He even ends up punching out a monitor that was showing Rush Limbaugh being his typical insensitive self about the disappearance of foreign journalists in Egypt. A little extreme, perhaps, but somewhat understandable given the connection Neal feels with Kahled on a personal level.

Meanwhile, Will finds out from Gary, a staff member that used to work for TMI, that Nina’s gossip column silence about a person is available to be bought. In the conference room, the news folks are pitching another story that would implicate the Koch brothers in a money scandal; you know, exactly the sort of story that would get Will fired instantly. Of course, he wants to do it anyway.

Corporate legal won’t let the news team work with their other contacts over in Egypt to find out about Kahled because they don’t want to assume liability for a foreign freelance correspondent. Don, out of frustration and lingering guilt about Elliott’s injuries, storms down to Reese’s office and attempts to bust it down with his shoulder. Is this how the guys on this show deal with their emotions, by injuring themselves on very solid objects?

Elliott finds out that a fringe group has Kahled, and they’re asking for $1.5 million to free him. While I highly doubt corporate legal would go for that, the news team is going to give it a try. The lead story that night is the growing Wisconsin protest, and Mac finally confronts Wade after dodging his calls all week. He admits to taking advantage of her position at the show, and she delivers a great breakup line: “In this order, leave, lose the election, go to hell.”

Will ends up meeting Nina secretly in the backroom of a bar to discuss becoming “silent partners” to the tune of $50,000. He’s not buying her column’s silence about him, but rather about Mackenzie. He’s in the middle of writing the check when she utters the fateful words: “Hey, Will, we’re journalists.” He freezes midsignature and instantly launches into a mini-rant about how his staff members are the real journalists, not her. He says she can go after him all she wants, but if she touches any of his staff, he will go after her with a vengeance. I suppose it’s a sweet sentiment, but it’s a little contradictory to his anti-meanness agenda of last episode to threaten to dedicate airtime to ruining Nina’s life should she write about his staff again.

Jim, meanwhile, has completely forgotten about his Valentine’s Day plans with Lisa in the wake of all the work they’ve been doing. While he’s meeting with Mackenzie, Maggie, and Sloan for one last econ lesson, Lisa storms into the newsroom yelling about being stood up on Valentine’s Day. He apologizes, but it doesn’t go over well at first; after Maggie’s defense of his character, though, Lisa reconsiders.

In other good news, corporate wired the money to Egypt, and Kahled has been released. Mackenzie knowingly accuses Will of sending the money himself; after all, if corporate wouldn’t even let them contact Egypt, why would they wire that much money? Will did, of course, pay for Kahled’s freedom because he’s one of their own now, and Will protects his staff.

Neal comes in with a check for Will, saying it isn’t much but he wanted to help, and Maggie follows, saying the same. The memo lines say “Coach” on them, and when Will looks out of his office, the entire staff is lined up with checks to help cover what it cost to get Kahled free—his very own Rudy moment. Mackenzie, of course, orchestrated the whole thing, and Will hugs her as the music swells and we see Kahled waving to Neal on Skype, safe and sound.

The sentimental ending might have been slightly more effective if the episode had actually aired around Valentine’s Day when the events take place; as it stood, though, the cheesiness of that final scene was too much for me.  For next episode, I’d like to see even more of Sloan. I feel like we haven’t gotten to really explore her character yet, and she intrigues me.