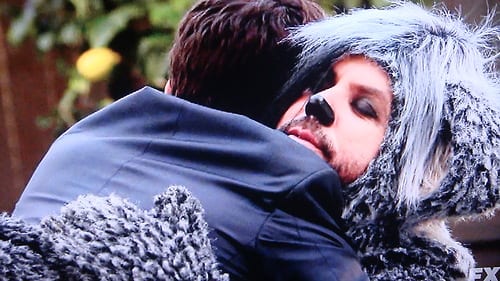 I need a hug to make me feel better about this makeup and my hair!

The episode opens with Ryan on his phone, looking at interest rates to invest his money—and so not paying attention to where he’s walking. He ends up stepping in Wilfred’s poop, which Wilfred claims was an attempt at recreating the Mona Lisa. Ryan gets agitated, which triggers Wilfred to go on a lecture about Ryan being concerned with the future rather than now. We have now been introduced to the premise for tonight’s episode, per the general formula. The humor, while nice, isn’t as great as it was last week.

Ryan’s trying to clean his shoe in the bathroom. They hear someone talking and initially think he’s speaking to them. Turns out he’s just on the phone. (I don’t understand how people can have conversations on the phone in the bathroom. I just can’t.) Ryan asks him about his big phone call. His coworker, Kevin, offers to help with Ryan’s search for a proper investment, suggesting that his friend Warner could help. Wilfred protests, reminding Ryan of a $9,000 doghouse he wanted for himself. This bathroom scene was definitely more amusing than the first scene.

Wilfred is complaining about Ryan not living in the now. Ryan’s arguing leads Wilfred to tell Ryan that he’s dying. The dog claims that he smelled something and says it’s a tumor in his brain. When Ryan says he’s lying, Wilfred explains to him that a brain tumor would explain his anxiety, blackouts, and hallucinations. Ryan is seemingly buying it. Wilfred pulls out a gun and points it at Ryan, telling him he can’t stand to see him suffer. Wilfred shoots once, away from Ryan, and then goes to shoot again but the gun clicks. “Gotcha” Wilfred says to Ryan, angering Ryan. A great example of living in the moment. Two armed men walk over and Ryan thinks it’s one of Wilfred’s tricks. They shove a gun in Wilfred’s face and threaten the dog if Ryan doesn’t hand over his wallet. Ryan hands it over and Wilfred’s upset about having a gun shoved his in face. He says he can’t smell anything. He decides he needs something stronger to smell and rips off the homeless guy’s underwear and smells it. He still says he smells nothing. Second best scene of the night! Wilfred would lie about a brain tumor to try to make Ryan feel a certain way, or to try and prove a point. The mugging was an interesting part as well, particularly Ryan’s lack of reaction. He was sure it was Wilfred playing another joke on him to make him feel “in the moment.”

Ryan takes Wilfred to the vet and the vet says everything’s fine, but that dogs can lose their sense of smell from stress. Ryan thinks it’s karma for the stunt Wilfred pulled. No sympathy for Wilfred there. Poor Wilfred has no idea what he’s going to do now that he can’t smell. Ryan suggests reading a book. Wilfred’s only interested in a book if it’s got Matt Damon in the middle blowing and shooting things up. That’s funny, since I totally love books where Matt Damon gets naked in the middle.

On a lovely boat, Ryan and Kevin are meeting with Kevin’s investment, er, helper, Warner. Wilfred discovers that there’s more than one UPS guy. Haha. Kevin throws in Ryan’s father’s name and Warner is now clearly more interested. Uh oh. This week’s guest stars are not nearly as interesting as Dorian Brown. Speaking of, where is Kristen now? Back in India? Still living with Ryan? And where the hell is Jenna still? Are we ever going to see Fiona Gubelmann again?

Ryan goes into the basement exclaiming that Warner called. He’s excited. Probably shouldn’t be. Investments like these either don’t work out, or are a scam from the beginning. Wilfred is reading and makes him wait until he finishes. “Jesus, put down the bong and pick up a book,” Wilfred says to Ryan while they’re having some kind of philosophical debate, leaving Ryan a bit confused until Wilfred holds up the prospectus that Warner gave him.

Ryan and Wilfred head to the park that will be destroyed by Warner’s construction project. Wilfred tells Ryan that the park helps inner city dogs, ones that come from broken homes. There’s a group of men going over the plans. Wilfred starts a protest. Warner approaches Ryan and says the min. buy in is $10,000. Oh this doesn’t seem well. At all. Wilfred tells Ryan that he’s more concerned about the park than the future, unlike Ryan, who is only worried about the future.

Ryan goes into the basement and asks why Wilfred is in the dark. The dog says “There’s darkness everywhere, Ryan. You just can’t see it because the sun is such an attention whore.” and burns a cigarette into his arm. He’s clearly depressed about the recent turn of events. Turns out he’s been reading some pretty depressing books as well. Ryan is looking for his checkbook and says he can’t find it. He suggests that the two of them go for a walk when he gets back from meeting Warner. Depressed Wilfred is interesting and still pretty funny. I, personally, enjoyed murderous-rampage Wilfred from last week more than depressed-emo Wilfred.

At the meeting, Ryan gets a phone call from Wilfred, which he ignores. Kevin brings up Amanda. Another phone call, again ignored. Kevin gets a text saying that his kid pierced his scrotum and is on his way to the hospital. Kevin could not care less (about his son. He clearly cares too much about his son’s scrotum). Ryan seems perturbed by Kevin’s nonchalant attitude about the situation. Ryan calls Wilfred and hears his disturbing voicemail recording. Ryan heads home and finds Wilfred fine, but with the emo style (oh god, that hair!) and sitting on top of the balcony. Ryan thinks this is about the doghouse and as he’s walking away, Wilfred jumps and attempts to hang himself.

And Ryan finally learns his lesson as he’s trying to revive Wilfred. Good job Wilfred, again. “By the way, you’re breath smells disgusting.” Wilfred points out after Ryan performs some CPR. They make up and hug. Ryan tells Wilfred “I love you.” and Wilfred responds by calling Ryan a stingy prick for not being willing to pay for the doghouse.

In the final scene, Wilfred admits to neglecting Bear while Ryan was neglecting him. Bear is hanging behind them and Wilfred replays what happened earlier between he and Ryan. Ryan is clearly not amused. Great final scene, especially when Wilfred begins to start humping and fooling around with Bear following their brief play.

This episode was not nearly as great as the last. The main issue is the formula that the writers seem to be following. I was going to comment on it last week, but I was too busy laughing to really notice it. When the formula works and you have some great comedic scenes, you don’t notice it. When the comedy is a bit less than stellar, the formula is glaringly annoying, bordering on distracting. Earlier in the episode, when Wilfred was going on and on about Ryan paying too much attention to the future, you could kind of see where things were going. Per usual, Wilfred made Ryan see the error of his ways, and thinks were a-okay at the end.