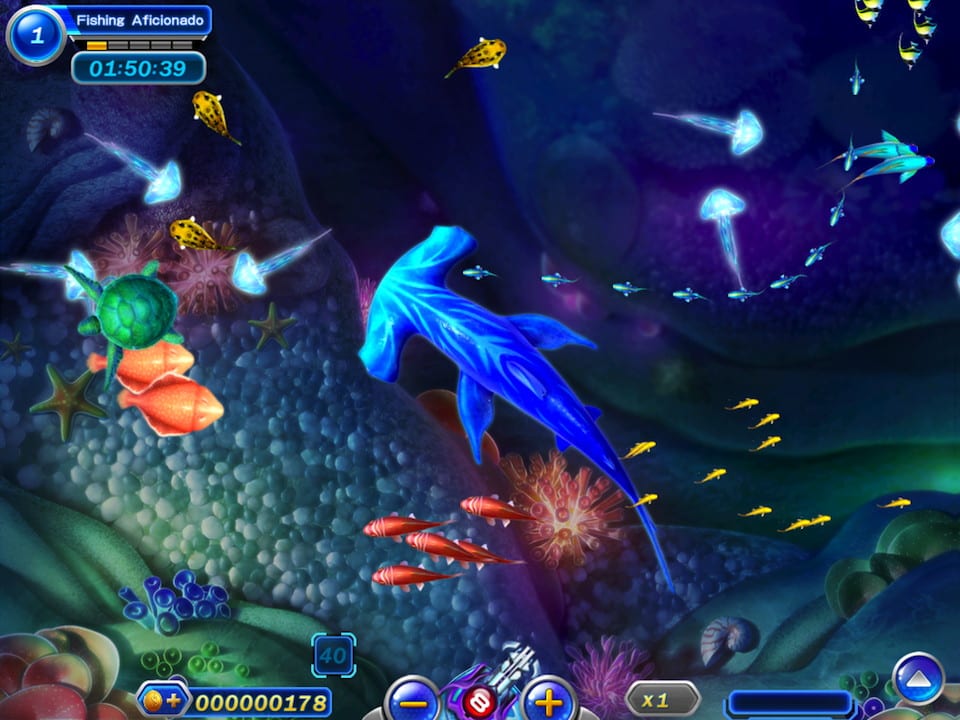 Fishing Joy 2 may seem like a simple aquarium screensaver at first glance, but submerged deep beneath its calming surface is a game requiring skill and luck comparable to gambling. A sequel to the popular title that has been downloaded over 85 million times, Fishing Joy 2 returns with the same addictiveness of the original but adds new levels and a new combo multiplier that will hook you in.

As I mentioned above, Fishing Joy 2 looks like you’re looking into an ocean aquarium filled with all types of fish, but you’re not just admiring the little clownfish swimming by – you’re shooting them. Each fish you catch (you’re technically shooting them) gives you coins depending on how much each one is worth. The bigger the fish, the more coins you get. Seems pretty straightforward, right? Well, not until you realize that each shot costs you coins too.

Shots in the game come in different sizes and prices. The most expensive shot has the highest chance of catching even the smallest fish in the game, but you might even get lucky and catch the great Hammerhead Shark with a measly one-coiner. It’s this type of probability and luck-based gameplay that makes Fishing Joy 2 more complex than it may seem and frustrating at times too. You can also chance upon special power-ups with varying effects like catching all fish on-screen or playing a lottery ticket-like mini-game. Additionally, this sequel now lets you add multiplier bonuses to your shots to let you reap in the rewards even more. You can gamble and risk doubling your net gain, but this boost will cost you double whether you catch the fish or not.

If your loss becomes greater than your income, you’ll run out of coins fast. When I started playing, I didn’t realize there was strategy involved and ended up with 0 coins in mere seconds. Now, here is where having a real-life gambling addiction can really hurt you. The game gives you 200 free coins every hour and your iOS device can notify you when rewards are ready, but if you don’t want to wait for your coin supply to refill, you could be tempted to purchase more coins in exchange for real dollars. Of course, smart players will know not to blind-fire every fish they see, so may the game’s in-app store be a warning to those of you out there who get a little trigger happy.

Charging players for each shot they make seems unfair, and it’s comparable to charging players for more lives in a video game. If you’re having fun with the game, though, chances are you’re catching big fish and banking on each shot, so you could avoid this problem by playing it safe and trying to catch smaller fish. Get enough coins, and you’ll level up and unlock more weapons and coins to play with. It is annoying, however, having to wait two whole hours (or pay real cash) when luck wasn’t in your favor.

Fishing Joy 2 is essentially a pick-up and play game and the two-hour wait period makes it the perfect distraction on the commute to work. Your main objective is to just amass more coins and level up, so not only is it a super casual game, but it’s quite simple and oftentimes repetitive. The game’s gambling components make it quite addicting though. Fishing Joy 2 is no fun at all when you run out of coins to play with, but if Lady Luck’s by your side, you end up winning.