In a recent interview with the LA Times, Maroon 5’s James Valentine made an interesting comment about the band’s mindset in 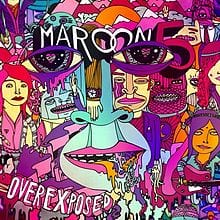 crafting their latest album, “Overexposed” – and their willingness to, as frontman Adam Levine put it, “fit in”.

“The price of admission is that there is a sound you have to slot into if you even want a shot on radio,” said Valentine. “Whether that’s good or bad is another discussion. But that’s the way it’s been for the last two years.”

The album  itself is equally unapologetic in its hit-seeking delivery. “Payphone” is really the only track in which Levine’s emotion is able to break through the over-polished, AutoTune veneer that covers the album like a pastel-colored candy coating, making the whole thing go down easy.

Sure, it will satisfy your sugar fix. But what about the crash?

That, of course, is the reality of an album that is truly unremarkable. That’s not to say it’s bad – it’s not. It’s not good, either. It’s just not unique, really, in any respect.

While “Overexposed” may seem to be logical progression for the band that released the inescapably catchy, quirky “Moves Like Jagger” not so long ago, one would be hard pressed to find a standout hit like it among this bunch.

Sure, there are noticeable variations on the inoffensive, upbeat, dance-pop theme. There’s the funk-infused “Doin’ Dirt” and Coldplay-esque “Daylight”; “Lucky Strike” is almost manic, blending an electric guitar with a relentless, throbbing dance beat and Levine’s impossibly-high vocals.

Still, “Overexposed” blends together. It’s a super-sweet mix of club jams and odes to some heartless heartbreaker, who has somehow wounded the feelings that Levine and co. can’t seem to convey in the finished product.

To put it another way, it’s the presence of the parade of producers (read: hitmakers) who contributed to the record that is most evident on the whole – not that of Levine’s actual bandmates. Close your eyes and listen: is that the sound of an electric guitar or a synthesizer? Is that bouncing backbeat the work of a drum machine or an actual kick drum? It’s anyone’s guess.

In all probability, it’s just the sound of Maroon 5 laughing all the way to the bank – and the top of the Billboard Hot 100.