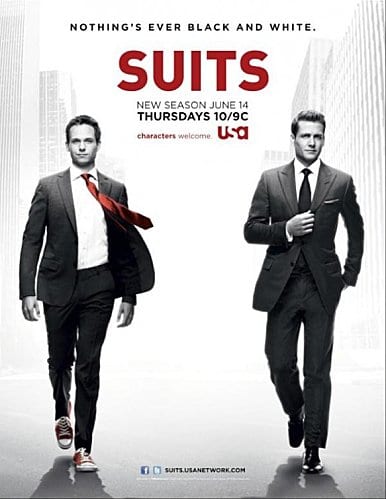 Tonight marks the season two premiere of USA’s hit show, “Suits”. Read on for Blast’s full coverage of “Suits”, which will get you caught up and amped up for tonight’s big premiere.

Here’s a quick summary of season one for any newcomers who are just joining us. Mike Ross is an extremely intelligent young man with a photographic memory who was hired to work as a lawyer at the firm Pearson Hardman. He was hired by Harvey Specter, a legend in the law world and Pearson Hardman’s best lawyer. The catch is that Harvey hired Mike despite knowing that he has no college or law degree whatsoever. Much of season one was spent trying to conceal the big secret, and Mike and Harvey manage to keep it between them and Harvey’s assistant, Donna.

Meanwhile, a love triangle formed between Mike and two girls – Jenny and Rachel. Jenny is the former girlfriend of Mike’s best friend Trevor, who left town after nearly getting killed for dealing weed. When Trevor eventually returns to the city, Mike and Jenny refrain from telling them about their relationship. Rachel is a paralegal at Pearson Hardman who has made her attraction to Mike clear to him by kissing him in the firm’s library. The kiss was witnessed by Louis Litt, another lawyer at the firm who is also Harvey’s antagonist. Louis warns Jenny about Rachel and Mike, which makes her suspicious about something going on between the two of them.

Where We Left Off

The last few episodes of the first season of “Suits” brought drama to the team at Pearson Hardman. Harvey discovers that his former mentor and friend, DA Cameron Dennis (played by Gary Cole), buried important evidence in order to sway cases however he saw fit. As the prosecution builds its case against Dennis, Harvey is pressured to testify in court against his former boss and betray the man that made him the successful lawyer that he is now. Harvey continually refuses to testify, so his assistant Donna and Jessica Pearson herself take matters into their own hands, going behind Harvey’s back to blackmail Dennis into pleading guilty and settling with the prosecution.

Meanwhile, Harvey has made it his mission to free Clifford Danner from prison – a man he wrongfully convicted of murder twelve years ago. Harvey was able to put the man away because of the evidence that Dennis hid from the investigation. Looking to right his wrongs, Harvey eventually convinces Danner that he can free him from prison, negating the four years left on his sentence. The stakes are raised when the Harvey and his new client are given a choice: if they continue to pursue the case and lose, Danner could face life in prison. If they drop the case, Danner can continue to serve the remaining four years of his sentence. Harvey goes for it, and after a number of what look like insurmountable setbacks, he and Mike work together to win the case.

Jenny accuses Mike of having feelings for Rachel

Lastly, love is proving to be a fickle thing for Mike. After a disastrous double-date with Rachel and another lawyer at the firm, Jenny still believes that there’s something going on between Mike and Rachel. Mike adamantly denies having any interest in Rachel, insisting that he wants to be with Jenny.

As the season finale comes to a close, Trevor intercepts a voicemail that Rachel left on Mike’s phone. In the message, Rachel mentions kissing Mike and acknowledges the fact that Mike is dating Jenny, which enrages Trevor. In the final moments of the season finale, we see Trevor approach Jessica Pearson and tell her that there is something she needs to know about Mike Ross. What a cliffhanger!

Last season’s finale of “Suits” left two storylines hanging in the balance – Mike’s employment at Pearson Hardman, and the Mike / Jenny / Rachel love triangle. Now that Jessica knows Mike’s secret, Harvey must find a way to save him from being fired. And after Trevor heard Rachel’s voicemail on Mike’s phone, he didn’t handle the news very well. What will happen with Mike and Jenny, now that Trevor knows about them dating? Tonight, fans will get the answers they’ve been waiting for since last summer.

The “Civil War” at Pearson Hardman

You’ve known the firm’s co-founder, Jessica Pearson, since episode one. But where does the Hardman in “Pearson Hardman” come from? Season two introduces us to Daniel Hardman, the other half of the firm who was forced to leave years ago. But due to a recent turn of events, Hardman is back in the picture, and Harvey and Jessica will do anything they can to prevent him from retaking his position at Pearson Hardman. The show’s creator and writer, Aaron Korsh, said in an interview with “The Hollywood Reporter”: “I felt like the theme of this season was Civil War. [Hardman is] coming back and it’s causing divisions within the firm. It tests people’s loyalties to each other.”

In season one, most if not all of the cases that Pearson Hardman took on were resolved by the end of each episode. But in the new season, expect cases to have multi-episode arcs. During a Q&A session with Blast and other publications, Gabriel Macht – who plays Harvey Specter – told us that, “I think as far as last season [is concerned], the show had a real strong procedural element with the open and shut cases every week. This season, USA has actually encouraged the writing staff to go a little bit more serialized so that we’re going to have story lines that go over two, three, four episodes.”

Blast From the Past

Creator Aaron Korsh has confirmed that there will be a flashback episode, taking us five years into the past. Says Korsh, “We’re going to learn a little bit about Harvey’s family in the flashback…. And we’re going to learn somewhat Mike’s origin story of how he got on the wrong side of the law.” Unfortunately, when asked if he could talk about the flashback episode, Gabriel said, “I can’t, because I haven’t read it. All I know is that Harvey’s on a train, and he’s going back through stuff that happened five years ago. I think there is an element to Daniel Hardman and him being at the firm at that point and how Jessica and Harvey got him out. They basically blackmailed him in some way to get him out of the firm.”

In the season two premiere, we’ll see the aftermath of Trevor hearing Rachel’s voicemail. Jenny hears about the voicemail through Trevor, who also confronts her about dating Mike behind his back. Mike realizes that his relationship with Jenny is in shambles and decides to give in to Rachel’s advances. But as the two of them start dating, he quickly realizes that he has a choice to make: either he tells Rachel his secret and potentially jeopardizes the entire firm, or he cuts their relationship short and keeps his secret safe.

In season one, Louis often made it clear that he felt underappreciated and that he wasn’t getting the respect he deserved in the firm. As season two begins, Louis is still hurting from Jessica’s comment that, “When you’re running the firm of Litt, Nothing and Nobody, you can make the call. Until then, you can just get back to work.” Feeling his loyalty to Jessica is going unrewarded, Louis considers leaving the firm. But when returning firm co-founder Daniel Hardman comes courting, Louis starts to consider shifting his allegiances.

Louis gives Mike a hard time at his cubicle.

Now that you’re all caught up and ready for season two, it’s just a few hours until tonight’s premiere! Keep coming back to Blast for our full “Suits” coverage, where we will have reviews of episodes after they air each week. Also coming soon, a feature on “Suits” star Gabriel Macht, who plays Harvey Specter. Enjoy the premiere!