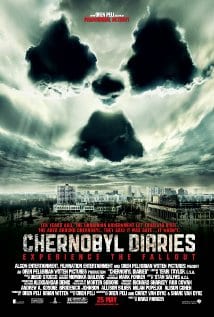 What should a good horror film be about? There is always the threat of violence and the anticipation of death, but, more than the visceral, a memorable horror film should be about human weakness. The Exorcist was more than a movie about demon possession: it was about a crisis of faith. The Shining was, in the simplest sense, a story about a haunted house (hotel), but it really was an exploration of Oedipal issues and physical abuse.

The Chernobyl Diaries, from one of the creators of Paranormal Activity, is extremely scary (I had my hands over my eyes the whole time) and competently made. There are enough dark passageways, creaky doors, and things leaping out at the camera to last me a whole year. But the movie fails to be a memorable work of horror, for it really isn’t about anything other than watching our heroes and heroines get picked off one by one—as much as that is quite frightening.

I’ll dispense with the plot as quickly as the film does: Chris and his bride-to-be Natalie (along with a friend named Amanda) travel to Kiev to visit Chris’s brother Paul. Instead of doing what normal people do, going on to visit Moscow, they decide to do what only numbskulls in a horror film would do, which is, quite obviously, check out the abandoned city next to Chernobyl, site of the worst nuclear disaster in history. Another couple and a tour guide round out the merry band of adventurers, who are, of course, young and good looking. You need know nothing else except that, in the supposedly abandoned post-nuclear city, they are not alone.

Chernobyl Diaries feints toward having a point. Paul has always dragged Chris along on crazy adventures. But that’s it. Nothing else to see here, unless you want to find out what’s after the gang and who will survive. The movie is a hodge-podge of Hostel, Turistas, The Descent, Blair Witch and a lot more hodge and podge that I could list but won’t.

In fact, it is interesting how similar Chernobyl Diaries is to Paranormal Activity. What are you talking about, you may ask. One is set within the confines of a home and features only two people while the other is free-ranging and set halfway across the world with a much larger cast. While I thought Paranormal Activity was the better movie (and certainly more of a sensation), both films are one dimensional. They are all about the hook and don’t explore any larger theme. In addition, in horror movies of years gone past, the good guys had a chance. If evil exists, good does too and you can fight back. In both of these movies, the protagonists are doomed. Perhaps that is a reflection of our age, a kind of resignation that we can’t or shouldn’t stand up to forces larger than ourselves.

I’m still unclear why the producers titled this movie Chernobyl Diaries. Like, Paranormal Activity, will there be more to come? If you’re expecting demur women in nineteenth century corsets keeping diaries, you won’t find it here. However, I can envision how this project was pitched. Let’s capitalize on the zombie and found footage craze and throw in the nuclear angle: a new twist on an old story, or so the cliché goes. It remains to be seen if this will work with audiences. It’s a scary movie but so familiar there’s little that will really inspire a horror-film enthusiast. Had something more meaningful been explored, Chernobyl Diaries could have stood out in the genre, but, as is, it barely registers on the Geiger counter.