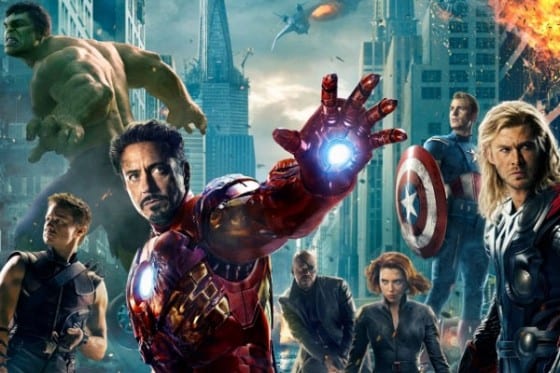 According to an early critic quoted in the latest trailer, “The Avengers” is the best superhero movie of all time.

My first thought was that saying anything is the “best of all time” is ridiculous. But then I thought about superhero movies as a genre- they have a spotty and flawed record at best. For every “Batman Begins” and “X-Men,” there’s a “Batman Forever” (also known as the Nippled Batman) or any version of the Hulk not involving Lou Ferrigno. Walking the delicate line between pleasing the masses, most of whom have never picked up a comic book in their lives, while trying not to incur the internet wrath of the fan-boys and girls is not something easily attained. As a result, the genre as a whole winds up having a split-personality: the movies are either candy-colored popcorn fare, flamboyant and silly, or high-brow noir films that end up seeming preachy and on-the-nose.

The more you think about it, the more you realize the bar isn’t all that high. And I say this as a fan.

I don’t know is “The Avengers” is the best superhero movie of all time, if only for the simple fact that I haven’t seen every superhero movie. But God help me if it isn’t the most fun, intricate and expertly executed blockbuster I’ve seen in a long, long time.

For the uninitiated: the Avengers are a selection of superheros from the Marvel canon, designed as a team, led by a spy named Nick Fury (Samuel L. Jackson, being very Samuel L. Jackson-y). This film is the climax of a series of individual superhero movies, including “Iron Man,” (Downey) “Thor” (Chris Hemsworth) and “Captain America,” (Chris Evans) in an oddly endearing parallel to comic book narrative strategies. The movie follows the previously-named heroes, along with Bruce Banner/The Hulk (Mark Ruffalo) and former assassins Hawkeye (Jeremy Renner) and Black Widow (Scarlett Johansson), as they try to rid the world of demigod and megalomaniac with daddy issues Loki (Tom Hiddleston).

Let me count the ways that this could have been a complete disaster. It threatened to simply be a showcase of Robert Downey, Jr.’s considerable talents backed up with…well a bunch of good-looking guys with talents less considerable. It was in 3-D. It’s two-and-a-half hours long. It’s about aliens with giant robot-dragons.

But under the steady hand of Joss Whedon, who wrote and directed this movie with obvious passion and care, everything works together like a well-oiled machine. No, that’s not right. Because unlike a machine, there’s also feeling, and that exclusively Whedon sense of soul. Maybe it runs like a well-oiled machine with a newly discovered sense of humanity and free will. Whedon deftly sidesteps all the pitfalls that would sink others. A major weakness lies with Thor and his nemesis, who according to canon need to speak in stodgy, renaissance fair dialogue. Solution? Tony Stark just makes fun of it every time he speaks. Captain America is kind of old-fashioned; Whedon centers a beautiful speech about how old-fashioned heroism is something everyone could use.

The movie is character-driven, yet lavishes unbelievable detail on major action scenes, as beautiful as they are exhilarating. My personal favorite were the aforementioned robot-dragons, gorgeous masterpieces of steampunk-influenced effect.

Mark Ruffalo and Jeremy Renner are the two newcomers to this party- Renner has a small but well-played role as archer Hawkeye, but Ruffalo pretty much steals the show as Banner. True to what I know of the original character, Banner is a soft-spoken nerd, confident only when he’s in a lab, and even then deferential. And in the most devastating moment in the movie, Banner changes into “the other guy,” and the last thing to leave before the monster takes over is the horrified, heartbroken look in his eyes.

There was perhaps no one better to tread that fine line between mainstream popularity and acolyte pandering than Whedon, an accomplished comic-book writer and fan-boy as well as a cinematic craftsman and master of genre storytelling. As in all his work, there is a beating heart in the middle of what could have been a soulless tent-pole movie, made for an easy buck and the extra two dollars for 3-D glasses. Does that make this the greatest superhero movie of all time? I’m not qualified to answer, but you can be sure I’ll be going to see it again. Maybe that will help me decide.