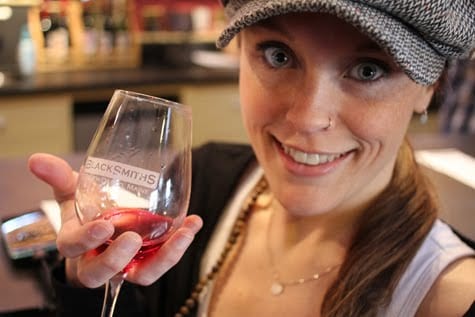 What do you get when you mix a vegan author with photography, one year, and a passion for food and food-related national holidays? Steff Deschenes and her sizzling blog, Almanac of Eats.

The idea for her website began with a just-for-fun competition with her boyfriend, a “365 Project” consisting of taking a picture of yourself every day for one year. She stuck with it for two years, taking pictures of herself at the dinner table every night, and this project catapulted Deschenes into an even bigger project. This year, she’s celebrating every national food holiday and writing about it on her blog.

“For me, it’s cool because I literally came up with this 48 hours before the New Year,” says Deschenes, author of the award-winning book “The Ice Cream Theory.”

The idea came to her when she read a tweet that said, “Happy National Enchilada Day.” She started doing research and found websites with information on food holidays. “I cross-referenced 10 to 15 different websites to compile my own food calendar,” says Deschenes.

But there’s a twist: Deschenes is a vegan, so she has to be super creative in order to celebrate each holiday animal-free. So, she began “veganizing” recepies. “For National Noodle Day I’m taking my mom’s recipe and ‘veganizing’ it,” she says. “If I don’t have a recipe, I research and think about how to make something and then make it from scratch.”

As a vegan, Deschenes says that she is more in tune with the food she eats and pays more attention to food in general. On her blog, she shares her own “veganized” recipes for each holiday as well as restaurant and product reviews.

“My overall goal is to have this site that is really fun and informative with a secret side dish of a healthy diet,” says Deschenes.

Her passion and her vibrant personality are summed up by three very telling words in her website bio: “author. foodie. smexy.” “Smexy” is a phrase Deschenes coined that combines smart and sexy. “Smart is sexy,” says Deschenes. “You don’t have to be a size zero.”

Within just two months of starting Almanac of Eats, she’s received restaurant review offers and sponsorships with major companies. “A bunch of companies send me food,” she says. “Barilla pasta sent me extra products to give away.” Some of her other sponsors have been Sophie’s Kitchen, Vermont Soy and Kettle Brand peanut butter.

When it comes to restaurant reviews, she says, “I am very harsh if they aren’t good; I don’t sugarcoat it.”

Despite the fact that Deschenes has found her passion in food, she was not always excited about cooking. In fact, she took a semester of culinary school and is not afraid to say that she hated it. The school did not encourage creativity, she says, which is something she thrives on.

“In my early twenties I refused to date a boy who couldn’t cook,” she says. “My claim to fame was that I made the best sandwiches. But as a vegan you can’t depend on anyone else if you want to eat well.” 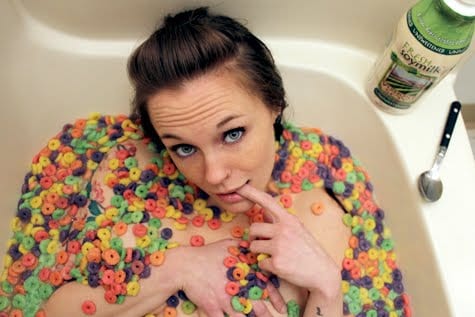 Deschenes’ creativity is obvious when reading her blog and her recipes. She likes to approach each holiday differently and play around with different ideas. On National Chocolate Soufflé Day, for example, she decided to take chocolate-flavored alcohol shots and make them taste like delectable chocolate soufflés.

Kicking it up another notch, Deschenes adds a dash of music for each holiday.  The next time you participate in National Blueberry Popover Day, crank up “I’m Good, I’m Gone” by Lykke Li or some coleslaw makin’ music with Florence and the Machine’s “No Light, No Light” for National Cold Cut Day.

“Entertainment is ideal,” she says. “I think it’s really cool when people celebrate with their kids, too.”  One mother told her that she saw it was National Cereal Day on Almanac of Eats and she celebrated it with her kids.

Sometimes the ideas and recipes she thinks up don’t always pan out, but she is not afraid to showcase what she came up with. National Almond Day’s recipe did not go as planned, so she decided to turn it into the Awesome Awful Almonds recipe, writing the disclaimer, “(I’M SO SORRY, ALMONDS. PLEASE DON’T HATE ME FOR WHAT I DID TO YOUR FRIENDS!) Oh well: you win some and you lose some, I guess.”

No matter how she approaches each food holiday, she sees even more success in her near future. “I think this blog will be successful because this isn’t my first rodeo with taking pictures and eating; I did it for two years,” she says. “Basically, if this was fantasy football, people would want me on their team.”

She does secretly hope that this could turn into another book, the content of which will, of course, be anything but dry.

Whether you are an aspiring vegan, someone looking for easy, healthy recipes or if you just have a passion for national food holidays, check out Deschenes’ entertaining twist on being a foodie in today’s world as she “eats the year” with her Almanac of Eats.