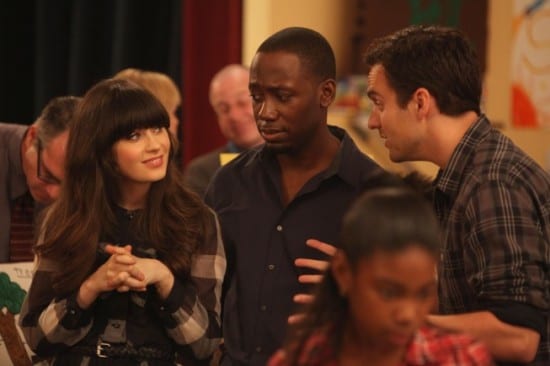 “I wish there was a word that meant complete satisfaction and complete self-loathing.”

When Cece spoke those words she was lamenting and rejoicing in her affinity for Schmidt’s sex game, but they oddly summed up my regard for this show. If this episode cemented anything it was this paradox: the coexistence of irredeemability and charm within each roommate. Since inspiration seems to be at a premium tonight, but “New Girl” warrants a impassioned assessment, lets spice things up like Schmidt and Cece in the bedroom..or car…or Starbucks bathroom. I’m gonna examine each character and why it is that all of them simultaneously perplex and delight me. I’ll even give Cece a whirl (who wouldn’t—goddamn she’s infuriating how gorgeous she is).

When Fox was promoting this assumed Zooey Deschanel vehicle, we thought we were getting a quirky single girl shaking up the lives of three normal shrubs. What we got instead was a quirk-tet, a foursome of freak. A peculiar-palooza.

JESS: In recent weeks, Jess’ worldview has been challenged. Julia, Nick’s girlfriend (at the time) was the scrambled to her sunny side up, countering her compulsive singing and vibrant pattern dresses with sardonic jibes and earthy tone pantsuits. For the first time, Jess began to reevaluate her “thing,” and the merits of being pretty, cheerful and innocent in a cutthroat world. As I documented then, I was proud she stuck to her guns and livened an albeit lighthearted discussion of what constitutes femininity in the age of fluid gender. But for her as an individual it meant a regaining of self-awareness and pride. This week she regressed a bit, reacting with contempt for a student, Brianna, who made a mockery of her musical problem solving with a YouTube animation of her impromptu concert. While “Sad Sparrow (Imagine A World Without Bullies)” wasn’t a lyrical treasure, it wasn’t horrendous and her intentions of empowering Nathaniel, a husky boy who’d been the victims of a coin-related harassment, were noble. But Brianna when confronted continued to dish out harsh observations of what she perceived was Jess’ “mask of happiness.”

Not one of us would react well if someone reminded us of our struggles in companionship, but Jess impulsively rips apart Brianna’s robot arm for the science fair. My objection to her behavior does not lie in the rashness, but in her insecurity. Jess struck me at this point as someone who would relish the attention of the internet parody (I mean being transformed into a bird that poops all over a guitar is badass) and be flattered. After all, if she’s already learned that she is proud of herself as a woman, why would a child’s reminder of a couple failed relationships send her over the edge? At least when the robot arm malfunctioned she owned up to her sabotage immediately. If she hadn’t, I would have been downright angry that the writers decided to portray her as so naive and inept again. She isn’t an incompetent teacher, she just has a rosy-cheeked style that some elementary girls might find off-putting or superficial. Certainly a self-assured Jess would translate into less shenanigans, but her road to individual discovery is less refreshing when you’ve trekked it before.

NICK: With the addition of Julia, we’ve been able to glean that Nick is, at times, crippled by his insecurity. He tries way too hard to be impressive and comes off obsessive instead. I was terrified for him when the cactus immediately signified disaster for him. I’m a critic. I analyze, for fun, and I found that disturbing. Yes, women are nuanced beings and more is being said by what is unsaid usually, but when you are ascribing meaning to a plant you’re asking for trouble. Even if unconsciously the gesture was an indictment of his character, you keep that observation to yourself. I’m no lothario by any stretch, but I do know that if you push a woman into a choice she wasn’t ready to make she will likely choose the path of least resistance, which means leaving you behind.

I’ve had my share of seven voicemail panic attacks where I felt like choosing the wrong words would mean selecting the coffin I’d be buried in, and watching that desperation unfold was both humorous and horrifying all at once. If any character kept steamrolling along this week, in terms of an expanded definition of who he is when cornered, it was Nick. His descent from denial to emotional collapse was like a train wreck made of gold. It was violent and unsightly, but it shone radiantly as an example of the hilarity that can be our own misfortune.

WINSTON: A consistent gripe of mine has been a discrepancy in airtime for Winston who has shown promise when given the chance, often opposite a new or minor character.  This week, he’s relegated to peanut gallery status, but he delivered some of the funniest, though I’ll admit incredibly random, lines of the night. Like when Schmidt refuses to reveal who his new lover is (she’s an anomaly in that he has slept with her on consecutive nights), Winston remarks how the fun to be had when Schmidt has girls over. In particular, he likes to pretend he’s his spurned, down-low lover, Theodore K. Mullins. Despite not being an active participant in any of the three plots (aside from attempting to fix Brianna’s robot arm with his “good scissors”) he takes the script’s handoff and runs with it. Other instances include him buying into Schmidt’s crescent moon diversion, his bully flashback complete with catchphrase (Brown Lightning!) and his misguided effort to tell off Brianna’s moms by insinuating that their daughter is a demon child (exact quotes will reside below in LOLLs). Surely, Lamorne Morris deserves a more demanding role, one where Winston, like Nick must face some ugly personal demons, but if you’re gonna be a benchwarmer he’s making the most of his playing time.

SCHMIDT (and a little something for Cece) : My devotion to this man was expressed early and often, but love means wanting the best for those you care about. So with a heavy heart, I must criticize the handling of my favorite douchebag. Truthfully, it’s because he was so unnaturally douchey that I objected to some of his material. The honest-to-goodness laughs stemmed from Schmidt’s responses to Cece feeling “100% ashamed” of him, and how he reconciled snatching such a babe with her reluctance to be seen in public together. Max Greenfield impersonating a dog left in a car with it paws hanging over the cracked window: genius.

However, I was dumbfounded and even irritated by the absurd amount of cheese metaphors. I suppose it was funny for Cece to be turned on by his allusions to “sharp cheddar” and what not, but Schmidt was at his Emmy-best when he was a mixture of neurotic and attention-seeking. The douchebag never left, but he would take a respite frequently so that the hygiene freak or the culture snob could come out to play. The simplistic portrayal was disappointing, but I was encouraged by the potential of his and Cece’s sexcapades. Though, Schmidt bragging about her at breakfast was too much and seemed like a complete concession for Cece who had just voiced concerns of being viewed as a prize. Granted, Schmidt slipped into some tenderness, admiring her smarts and ballsiness besides her boobs and dope body. But that’s Schmidt, ladies and gentlemen. He is not smooth, nor someone you want to show off, but he’ll charm the pants off you anyway.

We also mourn the end of Julia (the dork-adored Lizzy Caplan), who broke up with Nick and thus exited the “New Girl” universe. The character’s misgivings about the relationship were illuminated by his ramblings on the cactus over several painful voice messages. Though it was an abrupt end to her run, which was fruitful, especially when you factor in “Jess and Julia,” I sensed her role in Nick’s life had been fulfilled. In that vein, credit goes to the producers for commitment to story and not to ratings, contracts and all that hubbub. After such a magnificent string of episodes, I was underwhelmed by tonight’s fare (hence the experimentation in formatting), mostly due to some noticeable stagnation on the part of Jess and Schmidt. It’s unfair to expect growth every week, but “Bully” was a contrivance designed to tread familiar and comedically safe territory. However, for an unabashed glimpse into Nick’s sorrow and no shortage of quotables from Winston (a.k.a Theodore), or even my Schmitty, I’ll let a dip into a less refreshing pool slide. The love in the air from last week evaporates by almost a full letter grade,  B.

– “Did you feel me sweeping you down the current of my body? You were like a canoe on my river-body.”

– Winston as Theodore K. Mullins: “Damn it Schmidt! In our bed? Where we shave each other? I’ve loved you. I always have.”

– “I’m like a sexual snowflake. Each night with me is a unique experience.”

– “Leave me in the desert I’d grown some needles. You bet I would.”

– The next three begin Nick’s symptoms of denial:

“Julia dumped me. Sad face. You wanna go to the beach with me? Because I’m ready to rock, but I real don’t wanna be alone.”

“You know, the news only focuses on what goes wrong. It never talks about what goes right! Hello? Evolution?”

– “She is the spawn of Satan! And I do believe I speak for the entire human race when I say, people like her should not be building robots.”