The Swedish metal band Amaranthe has just released their new album Massive Addictive. For the past month they have been hitting the roads in the US along with the Dutch band Within Temptation, dropping some new tunes from their latest release. Both bands absolutely killed their performance in Worcester on Oct. 11 at the Palladium. 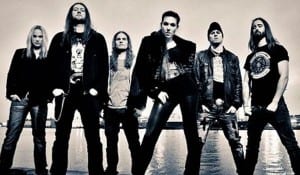 Amaranthe started their set with the track “Digital World” from Massive Addictive. The crowd erupted into cheers as the band made it to the stage. The show continued with some other tunes including “Hunger”, “Invincible” and one of the band’s most well known songs “1,000,000 Light years”. Amaranthe also played “Trinity” from their latest album before their self-titled track, and then finished the show off with their legendary song “Nexus”. The band had a great collaboration between their three vocalists.

Although the stage show was nothing out of the ordinary, it was still pretty good and enough. Elize Ryd’s interaction with the crowd brought a lot of energy to the venue. Probably one of the highlights of the show was guitarist Stefan Helleblad of Within Temptation coming on stage and playing along with Amaranth. Check out the Blast interview with Johan Andreassen and Morten Løwe Sørensen of Amaranthe below.

Blast Magazine: So how was the tour? This is the last stop right?

Morten Løwe Sørensen: So for this part of the tour, this is the last stop. Then we go to Japan. It has totally been a [good] tour with Within Temptation. Every single show has been awesome, really.

Blast: Massive Addictive is coming up. Are you excited about it?

Johan Andreassen: We are curious how people will react to it. It has a big difference but it is still Amaranthe.

Blast: What can you say about the album? Is it going to be the Amaranthe sound fans are used to?

Sørensen: Not major changes but the overall sound, it lets the instruments and voices to be heard better. We still have some fast songs in the album but not in the way people are used to, I think. Every track has its own sound I think, in a different way.

Blast: What is your favorite memory from the recording process?

Andreassen: Coming home [laughs]. I think it is the whole course of recording, being in the studio, the guys, to hang[ing] out with Jacob Hansen.

Sørensen: For me its actually recording, I love to record. To listen to the result, being creative and stuff.

Blast: The Amaranthe sound is kind of out of the box, kind of different than what metal fans are used to. Is this caused by the different backgrounds of the members or is there more to it?

Andreassen: I think we just wanted to put as much of everything in there. I don’t think our differences have too much to do about it.

Sørensen: I think that certain songs [have] more of one of the vocalists. Before it was mostly equally divided. Certain songs, for example, have more of Elize and not much Jake or other way around. Even a lot of Henrik, the growler, the screamer.

Blast: Who were your influences in this case?

Andreassen: ABBA. I think we tried to put as much of different types of music. There is a wide range between ABBA, Jackson, Soilwork but…I think SoilWork is the big thing for all of us.

Blast: Your producer, Jacob, you have been with him for a long time. It’s not really usual for bands to stick with the same producer for a long time. What is it about him that makes the relationship work?

Andreassen: Before we got him, we just sat down and talked [about] who to work with and we all agreed on Jacob. We understand each other very well. I mean, he understands our music and what we are trying to do.

Sørensen: He is very involved with the whole process. And he has been with us since the first album, which [gave] him a good overview of the sound of the band. He is also changing along the path as we are. He understands where we are going. I wouldn’t be the same without him.

Blast: How does the song writing process go with you guys? Because the band is kind of crowded. It is easy to spear Henrik’s part as screams but how do you divide them between Elize and Jake?

Sørensen: No. Jake writes the lyrics like one day before recording [laughs]. No, no. He is the guy involved with the lyrics process but it differs in album.

Blast: What is the goal of the band at the moment?

Sørensen: Yeah one step at a time [laughs]. Of course, we are hoping to have a headlining tour. We are gonna come back to US.

Blast: How would you compare the US to Europe?

Andreassen: This is a hard one. They both have their perks. Upsides and downsides. I mean it is really different. I think American audience is, they have been more open I guess. Open minded and more willing to take in more.

Sørensen: It was kind of a trial for us. You know, first time we did like 10 shows, not much. And it went pretty well. Now we had something to build on.