It must be difficult for anyone making a career decision to move to another country, let alone to make the decision when you’re thirteen. Cody Simpson — a cute blonde Australian boy — posted a couple videos of himself singing and playing guitar on youtube at the tender age of 13. Before he knew it, he was contacted by record producer Shawn Campbell and moved from Australia to Los Angeles to make an album with Atlantic Records.

His accomplishments seem boundless since: he has received over 110 million youtube views and well over 2 million facebook likes. His single, “On My Mind,” off of his second e.p. “Coast to Coast” reached #1 on Radio Disney and he has been on a myriad of television shows from the “Ellen DeGeneres Show” to “Live! With Regis and Kelly.” He is quickly becoming the next digital generation phenomenon.

Now at the age of 15, Cody is continuing to work hard in order to maintain his success.

When asked if there was a girl in his life – as his music mainly discusses relationships and love – Cody replied, “No, there isn’t at the moment. If the girl you’re talking about is named ‘Music’ then sure, I’m dating her. But really I am just focusing on my career at the moment. I’m a pretty focused kid and I am definitely very self motivated. And I think once I get everything established to where I want to be, than there is time for all that.  I got a while. I love to hang out with girls, but relationships are real hard for me at the moment. I have a lot of good friends, but nothing too serious.”

Cody is mature for his age. As a rising star, he is often compared to Justin Bieber. When asked what he thinks of being compared to Justin, Cody said, “I think a lot of people like to put things in boxes and say, ‘okay, he was discovered on YouTube and he sings and he is a teenager, so that means he is a new Justin Bieber.’ What? Like hold on a second…” 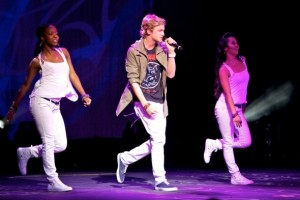 But despite the comparisons, Cody revealed, “Justin and I were just in the studio, like yesterday working together. Obviously I’m still at the more beginning stages of my career. But its cool to work with Justin and people like him. At the end of the day, it all comes down to the music and the creation of that. He is working on his next album and I am working on my debut. I think that this generation is definitely doing it big.”

On being a young artist, Cody said, “I think there are many disadvantages of being young and being a teenager. There are only certain things you can say musically and certain things you can do. I’m never really going to say anything risky or explicit in my songs. I definitely am more mature for my age. But I think as my fans grew up and as I grew up with my fans, we had to just create the music for them. A lot of people definitely expect a certain thing from a teen artist. But I think with my album, with the single, and the video, and this tour that I’m doing, I think I’m going to surprise a lot of people. I am really excited for the coming year. And I will see how it goes. I am definitely doing things that no one is expecting.”

A great example of Cody’s artistic and unexpected side is his cover of Drake’s “Marvin’s Room” — a song about drunk texting lost romances. But since the song is widely inappropriate for younger audiences, Cody decided to “re-imagine” it.

“I’m a big Drake fan in general. I love that song and I wanted to re-imagine it and create a version of the song I think my fans could listen to and they could relate to,” he said. “JoJo did the female side of things of that story, and then I wanted to create a story for my younger fans.”

So what is Cody doing when he is not recording, going on tour, or making music videos?

“I go to school in the morning usually. My tutor travels with me when I’m on the road. I think it’s important to stay in school,” he said.

But what about during his time off?

Now living in Los Angeles, golf and surf is easily available to him, though the surf is better “back home in Australia,” according to Cody. When asked about his life before fame, Cody misses “that time to chill with friends. I have friends back home that I am very close to that I still talk to every single day. We don’t really get to hang out too much. I miss them and my family and my lifestyle a little bit. I love writing music and [Los Angeles] is where you have to be for that.”

The future is promising. “I am creating my own album right now,” Cody said. “My single is coming out in the next few weeks. For right now, I am focusing on the tour.”

When asked where he would like to be in five years from now, he said, “I’ll be 20 years old, hopefully still making music as a respected artist and someone that has inspired a lot of people and has made some great music. That is all I really want to do.  I want to inspire my fans. I want to do work for charity in the next five years, definitely.  There is a lot of stuff happening to me and I want to make sure I am giving back to my fans and people less fortunate than me.”

Cody is currently touring the country. His tour dates can be seen here.