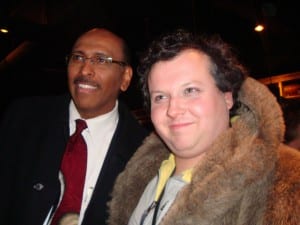 In the days before the New Hampshire primary, Occupy Manchester set up a camp in Veterans Memorial Park to serve as daytime base of operations for activists who came from as far away as the West Coast to protest the perversion of politics by corporate money. On the night before voting, the proximity of this encampment and the Radisson hotel lounge across the street led to friendly conversation between Occupy activists and at least two notable people.

Michael Steele is former chairman of the Republican National Committee. When John Ford of Occupy Boston pressed Steele about why those who caused economic collapse have never been criminally investigated, Steele said “The system moves to protect itself.” When asked by Ford, “What can we do?” Steel replied, “Keep doing what you’re doing.” In regards to the protests and political birddogging the occupiers had done in New Hampshire over the previous few days, Steel said, “You did a great job. Keep it going.”

A while later, activists including Eric Binder of Occupy Boston talked to Juan Williams, a writer and commentator appearing on Fox News Channel. When asked his opinion of Occupy, Williams said “I like it.” When Binder mentioned freedom of speech, Williams laughed in a friendly way and said “imagine what I feel about freedom of speech” (probably referring to a 2010 incident when comments he made on “The O’Reilly Factor” led to NPR terminating his contract). Williams, agreeing with many of the protestors’ gripes, said “there’s a lot to be changed.”

Starting Wednesday (when Mark Provost asked Mitt Romney to update his opinion on corporate personhood to “corporations are abusive people”) through Tuesday, activists with the Occupy movement made themselves seen and heard wherever candidates appeared in public. On Monday, Occupiers staged a protest at Obama for America headquarters in Manchester to send the message that neither Democrats nor Republicans are currently serving the common good.