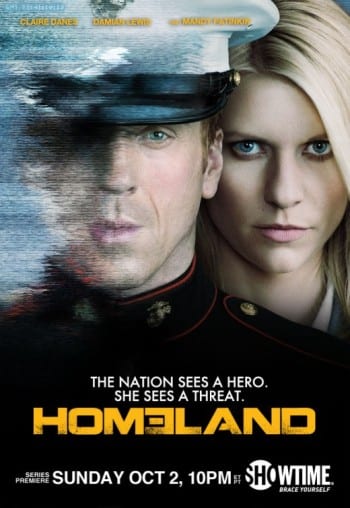 It has been apparent to me for some time that between film and television, the better writing is to be found on the small screen. There are many possible reasons for this, but it is not the purpose of this review to explore those—tempting as that may be. What I can allow is that both film and television are entirely concept driven, but because a movie is limited to two hours the concept often wins out at the expense of character, story, and the synthesis of these two to produce a fully expressed theme or point of view. In television, on the other hand, the writer has breathing room and a number of episodes to develop characters and to bring a message convincingly to our attention.

Nowhere is this better exemplified than in one-hour dramatic series such as The Wire, Breaking Bad, Boardwalk Empire –to name a few—, and the show under consideration in this review, “Homeland”.

“Homeland”, which is based on an Israel television series, airs on Showtime and follows the struggles of twin protagonists. On the one hand, we have Carrie Mathison (Claire Danes) a dedicated CIA analyst who is focused like a laser beam on preventing an impending terrorist strike on this nation. On the other hand, there is Sergeant Nicholas Brody (Damian Lewis), an American Marine, missing in action in Iraq (and believed to be dead) for eight years until, remarkably, he is found, rescued, and returned to his family in Washington DC. While Brody seems to be recovering, both mentally and physically from his harrowing imprisonment, Mathison believes the Marine may have been turned by Al Qaeda and will be involved in a “Homeland” attack. Mathison’s pursuit of Brody forms the core of the conflict around which the first season of this series revolves.

Naturally, there are other interesting secondary characters and conflicts. There are Sgt. Brody’s wife and two children who must adjust to his homecoming and the secrets he is hiding. Mathison herself carries a secret. She is bi-polar. Reveal this and she will be run out of the CIA. One man who comes to learn this is Mathison’s boss and mentor, Saul Berenson (Mandy Patinkin). He’s the elder statesman of the CIA and carries the weight, Atlas-like, of a thousand secrets on his stooped shoulders. There are various other soldiers, intelligence personnel, family members, and politicians who populate the series. The acting is excellent all around, and the series is like a great page-turner: whether you ultimately admire the show or not you do want to find out what happens.

And this is where series like “Homeland” have their flaws. Shows such as “Homeland” succumb to some of the same pressures that feature films do: that is, the concept is all-important, oftentimes to the detriment of character development and story logic. In addition, producers have the need to keep the audience from getting bored or antsy, which requires more and more twists and jaw-dropping moments. This is probably a larger cultural issue and has to do with attention spans in the age of YouTube, 1,000 channel cable systems, and so on, but the problem is it leaks into series like this where viewers have no patience to see organic character growth; rather, they need their heads whip-sawed every one or two episodes with a shocking revelation. This necessity forces the writers to invent even more and more pretzel-like story twists, which rapidly diminishes the believability of the narrative.

I felt Breaking Bad suffered from this as well, but it took three seasons to become a bit farcical. “Homeland”’s first season was twelve episodes, and beginning around episode eight I could see logic slipping away from the show creators as the need to stun the audience yet again overrode a believable plot line.

What also caused me to suspend my disbelief was the incident the show creators decided to hang the entire series’ hat on. Early on in the series, we are led to believe Sgt. Brody has been brainwashed, Manchurian Candidate-style, into becoming a Muslim and carrying out an attack on US soil. In the latter half of the season, we realize this is not so. Brody had been captured in Iraq but then he was sold to Abu Nazir, who is a composite of Osama bin Laden and Abu Musab al-Zarqawi. Nazir treats Brody humanely and Brody comes to love him, as he perceives Nazir to have rescued him from torture and death. Brody, now living in comfortable captivity, is tasked by Nazir with teaching English to his 10-year old son Issa. Brody also comes to love Issa who is killed in a US drone strike. The head of the CIA disavows the strike, which also kills eighty other school children, and claims it was staged by Al Qaeda. This enrages Brody who hatches the plan to return to the US to kill the CIA director and his staff. The CIA director is now Vice-President and set to run for President, and he courts the hero-POW Brody as a political ally. If Brody can get close enough he can blow himself and the Vice-President (and other key decision makers) up. Justice will be served.

Complicated, no? If it’s a bit hard to follow you need only take away one thing sub-textually: it’s the soon-to-be President –and others like him– who is the villain. Abu Nazir is a bad man but we never see his bad acts. We only see the power-hungry, bully Vice President Walden as the source of Brody’s treachery. Brody never seems to wrestle with the notion that Nazir staged the September 11th attacks or that he has likely tortured, maimed, beheaded, and murdered thousands. If the Vice President, as former head of the CIA, had accidentally killed children as part of a strike to get Nazir he would have been doing it to get Nazir, who intentionally has killed children and civilians. It would have been so much more interesting to portray Vice President Walden’s character as a well-meaning, patriotic, and kind man, who made this horrible mistake. And perhaps before Brody tries to kill him he sees that there is no monster, just a man struggling with no good choices—only the best among bad ones. Instead, Walden is characterized as a pure villainous cliché who deserves our scorn and violent death.

“Homeland” is impressive in the way it details the ‘war on terror,’ from the enhanced interrogation scenes to all the cloak and dagger activity the public would never be aware of. But the series shows its liberal bias time and again. There’s a moral equivalence between our leaders and Al Qaeda leaders. After Nazir’s son is killed and America denies the attack, Nazir mutters “and they call us terrorists.” We are meant to sympathize and agree with him, which is ridiculous on its face. Even Saul, the eminence grise of the CIA, in the final episode, is shown to be on the ‘right side.’ He discovers evidence of the Vice President’s iniquity and threatens to blow the whistle to The New York Times: this is what true heroes do, you see; settle grudges with powerful American politicians and reveal national security secrets by going to the newspapers.

The killing of Issa sets into motion Brody’s plot, but it’s not just Brody who has a justifiable gripe against the powers that be: it seems that all Marines in this series harbor grudges against the ‘war.’ I’m well aware that possibly no grunt or front-line solider is a fan of the brass or the political class, but yet again we have Marines and soldiers portrayed as those who have turned against the war after learning the truth. It’s more dramatic this way, but it’s only a stale meme at this point, and to the extent that one ever finds an unabashedly patriotic character in movies or TV shows, they are usually portrayed as deranged, sadistic, or simply jingoistic John Wayne types.

Indeed, in “Homeland,” Mathison who is a bit of another cliche (the lone voice always skirting the law and her superiors to accomplish her mission) suffers from mental problems. The writers couldn’t make her well-adjusted and focused on America’s interests and that’s that. She has to appear to be obsessed due to mania, as opposed to patriotism, and even falls in love with Brody (there’s not enough room here to detail how this comes about). Perhaps the show’s creators didn’t want “Homeland” to feel like a 24 knock off, but I’m not sure making Mathison mentally unstable was a great choice.

More than Mathison’s pathology, however, it’s the Brody plot line that will ensure this show’s descent into caricature instead of compelling drama. At about episode ten, I thought to myself if the producers put Mathison on to another case next season that would save the show, but if they continue with her pursuit of Brody, “Homeland” will not last as any kind of convincing narrative. As the cliffhanger in the final episode indicates, they fully intend to continue with the Mathison-Brody showdown.

These criticisms may appear to indicate I did not like the show. Quite the contrary. It is riveting and I gobbled up the twelve episodes in two weeks. The craftsmanship and the performances are all first rate, and I would highly recommend this for its pure entertainment value. But, “Homeland,” like so many feature films which fall prey to the pressures of “the hook” above all else, suffers from a great concept that no one seems to know what to do with after a certain point. The show sucks you in, but midway through you realize the producers have lost a handle on it, or, if they do know what they are doing, the tone becomes snide which will ensure a plummeting viewership.

Nevertheless, I maintain this is a show to watch and television is the place where ideas, themes, characters and subtleties can be explored in a dramatic narrative with more freedom and creativity than is being done in feature films.