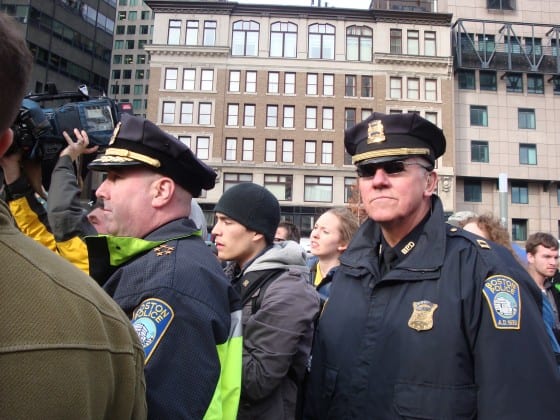 Boston Mayor Thomas M. Menino, speaking less than 24 hours after Suffolk Superior Court Judge Frances McIntyre lifted a restraining order that kept the city from raiding Occupy Boston’s tent city at Dewey Square Park, seems to have issued an ultimatum to the activists by saying “We’re going to ask the occupants of Dewey Square to be out there by midnight … [or] we’ll take further action.”

Occupy Boston encamped across from South Station on September 30. It’s now the longest-running “physical occupation” in the US but activists often assert that occupations — including Occupy Wall Street, Occupy Denver and Occupy Los Angeles — are actually communities of people rather than the physical spaces in which they congregate or set up tents.

Today Dewey Square is busy with activity as people move valuable items – such as supplies stored in the Food Tent and books kept in the Library Tent – to safe locations away from the encampment. Many activists involved with Occupy Boston are trying to return from the union-backed actions in Washington, DC where they arrived by bus Monday afternoon. On the home front, many Occupy Boston activists enrolled in college classes are struggling to concentrate on final exams or term papers today but have pledged to be in Dewey Square by midnight.

This morning, Mayor Menino issued a midnight deadline for Occupy Boston to leave the Greenway. The articulated threat of eviction is a clear and present danger to the community we have built over the past ten weeks. We came to Dewey Square to practice true democracy and give visibility to injustice; we came to see if we could not–in providing for basic needs–maintain a standing indictment against their enforced deprivation within our broader community. With this commitment came hard evidence of economic suffering, evidence that we present at the doorstep of the Federal Reserve along with our democracy, our songs and our chants that echo daily through the financial canyon. Today, the city threatens that community. It threatens the library, where we hold our classes and discuss ideas. It threatens our food tent, which has served thousands of people many more thousands of meals. It threatens our medical tent, which has provided treatment and care to the sick and to the injured. Not only these, it threatens the lives of those of us who have no place else to go. The city has cited concern for our safety as the reason for forcing us back into the streets. But make no mistake; the city’s concern for our safety will disperse when we do. We have therefore taken steps to ensure the safety of the infrastructure we have built, and to protect the most vulnerable among us in the event of the eviction. We are taking down the food tent, the medical tent, packing up our logistics supplies for safe-keeping and working with social service providers and other allies to secure shelter for our brothers and sisters most likely to experience homelessness if and when the city throws away their tents. We take action–today and always–in the name of economic and political justice, freedom of expression and our entire community.

Chris Ott from ACLU of Massachusetts sent out an email today with a message from the ACLU and the National Lawyers Guild which said,in part:

“Across the country, even people who have not been sympathetic to the Occupy movement have been shocked by images of the force used against peaceful protestors, including beatings, and the use of pepper spray. Mayor Menino’s announcement today has ensured nationwide attention for whatever happens next in Boston. We call on the City to show restraint and not repeat the mistakes made by carrying out heavy-handed crackdowns. If the City feels it must act, it at least has the responsibility to ensure a peaceful transition. Midnight deadlines and actions taken suddenly or under cover of darkness are rash and unhelpful. Boston, as part of the long New England tradition of town meeting and grassroots democracy, has an important role to play again in how it responds to Occupy Boston. We believe that Boston can – and must – set an example for the entire nation in protecting the rights of Occupy Boston participants, and the many other concerned citizens they represent.”

Gunner Scott, a well-known transgender activist involved with the Media Working Group at Occupy Boston since its establishment, told Blast, “I think the judge did not grasp the reality that free speech cannot be zoned, that a 24 hour protest is possible and that it is protected by the first amendment.”

Sage Radachowsky, an activist involved with both Occupy Boston and Occupy Harvard, expressed a different perspective in saying, “We are breaking the law. This is civil disobedience. We are breaking a law to show that we care immensely about the issues that we are raising. We should never have gone to court. We should have admitted that we are breaking laws, and for good reason. To protest the way that our economy has been gutted by a huge bailout to banks who got paid for ruining our economy, and against an undemocratic political landscape in which some people sleep on cardboard while others sleep in five homes.”