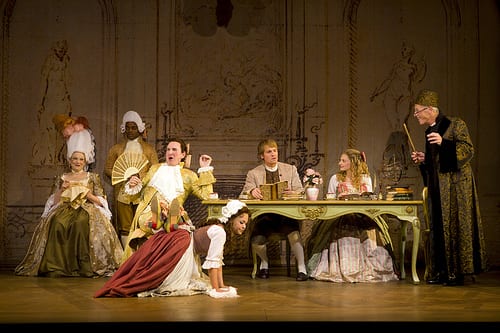 One moment you’re in a sumptuous mansion hearing a lesson on philosophy from an acclaimed scholar. Suddenly, the walls fold away and you find yourself in an alley, shunned, penniless and surrounded by goose-stepping soldiers. Next you’re on a dirty street on a foreign shore, being crawled at by a hoard of lepers. Fate attacks like a tornado, recedes into a gentle breeze and then fans back up into a tempest. There are more palaces, more slums, seas voyages, villas, theaters, a utopian city of gold, a ride on a hot air balloon…in short, director/adaptor, Mary Zimmerman gives “Candide” her signature treatment; It is epic in its scope and endlessly playful in its staging.

Zimmerman is the latest of many to revise the book of the 1956 Leonard Bernstein musical, itself adapted from Voltaire’s work of 1759. The satirical novella illustrates the absurdity of a belief gaining steam at the time, that we live in “the best of all possible worlds.” Zimmerman’s tale is a highly entertaining, humorous, picaresque adventure—but it does not manage to carry with it much satirical bite. The “Optimism” against which Voltaire was railing during the French Enlightenment, was a significant religious/philosophical movement, which threatened social reform. This “Candide” doesn’t tie the ideas to any equivalent contemporary movements, so it’s left just sort of poking fun at optimistic people.

“Candide’s” characters though, are fun. The man for whom the play is named, is our strapping young tenor, an overly earnest fellow who becomes a feather for each wind that blows. Geoff Packer plays the role with an almost frantic energy, which keeps him from being unbearable dashing. Candide attends the lectures of Professor Pangloss (get it, pan- gloss?), who converts the lad to his sacred philosophy that we live in the “greatest of all possible worlds,” that everything that happens is in accordance with a perfect god’s perfect plan. The tall, reed-thin actor, Larry Yando, fills his Pangloss with benevolent bluster.

The professor’s lessons are taught in the home of Ms. Cunegonde, a rich and beautiful woman, way above Candide in social standing. The two of course, fall in love. It is a naive love based upon dreams of comfort and affluence, but being forged with the hearts of the young and then subjected to adversity, it is a love that becomes immortal. Cunegonde is played by operatic soprano, Lauren Molina. The part is a challenging test, vocally and she executes it with absolute virtuosity. Molina’s voice is in fact the gem of this production.

Soon after Candide and Cunegonde meet and fall in love, Candide is expelled from her estate, which is then promptly sacked by an invading army. Such is life in this best of all possible worlds and so begins a series of misadventures with a pack of many more fun characters. The most fun of these is an old woman with one buttock and a million-and-one tricks for survival up her sleeve, played by the wonderful character actor, Cheryl Stern.

As far as the score of “Candide,” well, it’s upbeat and fun and it has its moments. I remember the timbre and the acrobatics of Molina’s voice extremely well, particularly in the song, “Glitter and Gay,” but I can’t say many of the show’s songs have lodged themselves in my mind the way good Broadway tunes are wont to do. I remember laughing at witty lyrics more than tapping my toes. Mostly though, what stays with about this “Candide” is its spectacle. Not glitzy grandeur, but unrelenting whimsical, inventiveness. That’s the fun of having Zimmerman onboard, as well as consistently featuring Boston’s most talented designers.

“Candide” plays at the Huntington’s B.U. Theatre through October 16.