Based on the Comedy Central animated series created by Devin Clark, Ugly Americans Apocolypsegeddon is a multiplayer twin-stick

shooter, allowing up to four people to tangle with the hordes of the undead and demonic that are attempting to bring about the end of the world. Players can choose one of four protagonists from the show, Mark (the human), Leonard (a drunk wizard), Callie (a demon girl), or Grimes (a cop). Each character has their own special abilities, and can level up a list of attributes and gain access to thirty different weapons.

The end of days is coming to New York City and its up to you to put a stop to it… again. Ugly Americans progresses smoothly from an opening cutscene to set the mood, straight into the first chapter of your journey.The flow of the game works relatively well, setting the chapter up, playing through a level and ending with a boss fight. Each boss fight demands that the player figure out the bosses patterns and attacks, but most of the fights can be won by simply circling around the level and shooting. With a top-down viewpoint, gamers move their way through a variety of levels ranging from a side-scrolling cityscape to a enclosed club setting with a giant cross-dressing demon named Bethany charging after you and blasting your characters with techno music. 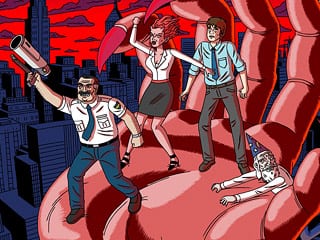 The gameplay itself is pretty standard; move your character with the left analog stick, shoot with the right, release a special attack with the right bumper. The game is easy to learn and quick to master, but unfortunately, the easy to learn, repetitive style of play is also easy to get bored with, even with the shifting levels and interesting looking bosses to contend with. Each of the playable characters all eventually end up feeling the same, and with the exception of their special attack essentially don’t differentiate from one another. The attributes and stats that come with leveling up are also pretty standard (strength, health points, agility, etc). Throughout the levels, players can also pick up items to help boost these stats such as Demon Babies that give you a permanent buff while you’re carrying them. The weapons, while very intriguing and humorous, are all very similar. High fire rate weapons equal less damage, while slow firing weapons do more, so essentially the only weapons that need to be used are the heavy hitters, as the majority of the fights in the game consist of players trying to knock down a giant health bar while circling the enemy.

The Blast Factor: Ugly Americans is a game that clearly caters to fans of the show. With a script written by the creator, the game falls a little flat on those looking for an interesting twin-stick shooter to have fun with. The linear feel of the levels leading up to the eventuality of a boss fight, players might very well feel a sense of disappointment or perhaps even boredom as they progress through the game. The multiplayer aspect is one of the redeeming qualities of the game, but it is difficult to actually get a four player matchup as so few people are playing it.

Ugly Americans is available for download on both the Playstation 3 and Xbox 360 for 800 points on Xbox live or ten bucks on PSN. A review copy of the game was provided by the publisher.