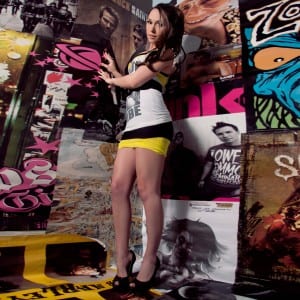 Ontario, Canada’s hottest new singer and songwriter, Andrea Godin, has been sharing her urban-pop tunes through the radio airwaves to showcase her newly released single, “Bullet”, a song reminiscent of Beyonce’s sound, but with a personal twist.

The medium to slow tempo song is Godin’s most difficult song to sing; however, its release on iTunes has been bringing Godin into the limelight. Godin’s popularity is only going up from this point as she works on branching out from her base in Canada to planning tours overseas in Europe.

Godin initiated her interest in vocalization at the young age of 11, started playing guitar at 13, graduated to songwriting at 14, and now at 20 years old, proudly boasts her debut EP album, released in September.

In her early years, Godin was more of a rock-and-roll girl, but as she developed her sounds, the r&b style of her music grew to encompass the songs she has been writing and producing as of lately.

“People ask me how I have an urban sound in my music when I’m surrounded by rock,” Godin said. “I just try to be myself. I don’t look to other people to copy them.”

Godin looks up to a number of female musicians including Alicia Keys, Lady Gaga, Leona Lewis, and Christina Aguilera, but she wants to make it known that she’s not trying to imitate certain celebrities.

To differentiate herself, Godin has been working on developing her true sound.

“Finding my sound for my first album was at first pop-rock, but I was really feeling that it wasn’t me,” she said. “We had to keep experimenting and I never thought I’d find a sound that was really me.”

About 70 percent of Godin’s lyrics are based upon personal experiences and the rest are a combination of influences from friends and acquaintances. The track “Bass Goes Down” is one of Godin’s personal favorites from her repertoire.

By releasing her album Godin accomplished one of her main goals and now she fully embraces the ideology that you can never give up if you want to achieve your goals.

“I think some of my songs are pretty catchy and I think people would enjoy them,” the artist continued.

Godin’s fan-base should keep an eye out for tracks like “I’ll Never Know” and “Sunrise to Sunset” on the television screen, Godin’s next goal for promoting her music and receiving more exposure.

For more information and updates on Godin’s hot new music, visit her pages on Myspace and Twitter