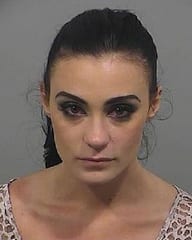 Jessica Candige, 25, is facing domestic abuse charges after she was caught by a police officer allegedly punching her husband.

Candige, of Yarmouth, Maine, appeared on “American Idol” twice under the name Jessica Cunningham. She made it to the final 24 and upon her departure gave an obscene gesture to the judges.

Sunday evening a Portland police officer saw her punch her husband Craig Candige in the face several times as he was trying to walk toward the officer.

Her husband told the Portland Press Herald that he was at fault and his wife did not deserve to be charged. Jessica is scheduled to appear in court on June 30.