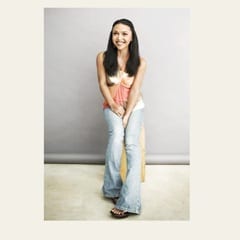 Danielle Nicolet will look familiar to Gen-Y’ers. She played Vonda Mahoney over two years on the ABC classic “Family Matters.”

She bounced around with several guest appearances on sitcoms, and in 2005, she landed a starring role in the prime time sitcom, “Second Time Around.” In 2007, Danielle took a turn to television drama, starring as head ICU nurse Mary Singletary, on the tear-jerker “Heartland,” with Treat Williams on TNT. Critics called her, “the very heart of Heartland”, and found it “impossible not to love the energetic, outspoken and emotionally open character”.

Her most recent project is the TV film “Red Faction” based on the successful video game franchise, but Nicolet already has some sci-fi cred. 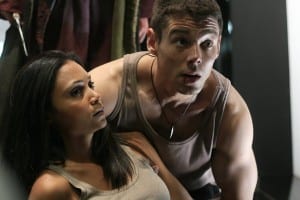 In “Stargate SG-1” she played Reese, the “mother” and creator of the replicators on the episode “Menace.” Reese was a robot that was entirely human-like, beautiful but emotionally stunted. She behaved like a petulant child, and is single-handedly responsible for the creation of the replicators.

In “Red Faction,” she stars with two other Stargate veterans: Robert Patrick who started and died quickly in “Stargate: Atlantis,” and Brian J. Smith, star of “Universe.”

BLAST: Before talking about Red Faction, I think it’s important that the viewers have a good understanding of who you are. What is the most important thing you want your viewers to know? 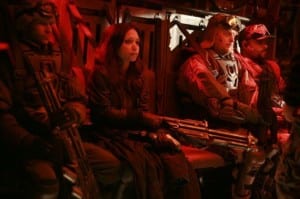 DANIELLE NICOLET: I would like my viewers to think that I am a leggy, uber-genius, super-model who is the object of their dreams and affections. Sadly, I am but a silly girl who has no idea how to answer that question. I wish I were more interesting!!

BLAST: Was the move from California to Ohio a difficult change? And was the move specifically for your acting career?

DN: It was actually the other way around. I moved to California when I was young to pursue athletics. That didn’t work out for me, but it did put me 3000 miles closer to my ultimate goal of being an actor. It was a secret ambition, that I finally told my parents about, when it became clear that gymnastics wasn’t working out for me.

BLAST: For those who are not familiar about Red Faction, could you explain what it is about? 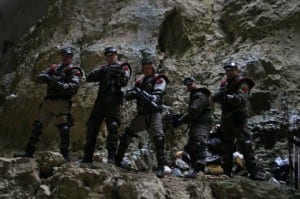 DN: Red Faction Officer Jake Mason has his world turned inside out when he discovers that now, 12 years after her kidnapping, his sister is still alive. As a powerful new enemy swarms across the planet, Jake goes out to find her, only to learn that his lost sister is one of them…a cold-blooded soldier sworn to destroy the Red Faction.

This film is based on a video game, but truly stands on it’s own two feet. Ultimately, this is a character drama that takes place on a distant land in a distant future.

BLAST: When did you first find out about Red Faction, and what interested you most about the script?

DN: I found out about it just before Christmas last year. In fact, Red Faction was the last script I read before the town kind of slows down for the holidays. I knew by the second page that I loved it and loved my character, Tess. I’m a science fiction fan myself, so I know a good sci-fi story when I read one. Truthfully, doing a movie like this has been a wish of mine for a long time. To be a part of an adventure, on Mars…too good.

BLAST: You play the role of Tess De La Vega. What interested you most about this character?

DN: She’s fun! There’s nothing better than a character who wants to swim, but is afraid of getting wet, so to speak.

BLAST: How did you prepare for this role and how long did it take?

DN: This was one of those roles that didn’t require too much preparation. It was all right there in the script. My character was so well written that I focused on honoring the material most of all. Plus, with Michael Nankin as a director it’s a really collaborative effort. I was fortunate to have him to lean on and bounce ideas off of.

BLAST: Would you say that there are any similarities between you and Tess?

DN: I hate to admit just how many there are! We are both stubborn, and don’t adapt well to the outdoors!

BLAST: It seems that you’ve had roles in many television shows, what is your favorite genre and what would you like to try next?

DN: It’s hard to say. I really enjoy television as a medium. I always have. I think I wouldn’t mind doing a gritty drama.