I think it’s a little unfair that the fate of feminism rests on Kristen Wiig’s ability to tell a poop joke.

But as they say, some have greatness thrust upon them. And so the destiny of modern womanhood lies not with Congress, nor within the trenches of women’s rights groups, nor in the ivory towers of feminist scholarship. Instead it comes to Wiig, and her crass, farting, fighting, deliriously funny costars in “Bridesmaids” to prove to the world that women are indeed humorous. And therefore have the right to equal pay, reproductive freedom and the ability to ride the subway without being groped. Or so the latest arts and living articles would have you believe.

The trailers for “Bridesmaids” which have saturated the market are billing the movie as a gross-out flick that just happens to star women. But it’s so much more than that. It’s a darkly comic meditation on the fraught nature of female friendships, a recession story about a woman trying to pull herself together after her business fails, a romantic comedy that centers around a wedding. It’s beautiful and tender and ultimately optimistic.

It just happens to be funny. Really funny. Raucously, grotesquely, slyly funny. It’s perhaps the funniest movie to come out in the past five years.

Wiig is Annie, down on her luck after her bakery closes in the recession. She lives with a pair of odd British siblings (Rebel Wilson and Matt Lucas), works at a jewelry counter to make ends meet, and feeds her starving self-esteem by sleeping with a Porsche-driving douchebag named Ted (Jon Hamm) who greets her cheerfully with “Hey, Fuck-Buddy!” 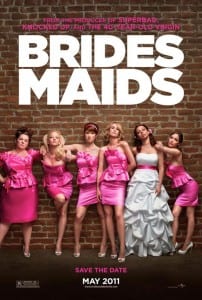 As is pretty realistic with down-on-their-luck girls the world over, the only bright spot in Annie’s life is her best friend Lillian (Maya Rudolph). So when Lillian announces that she’s engaged and wants Annie to be her maid-of-honor, the destruction that ensues is largely a result of Annie’s panic at losing her only lifeline.

Wiig as Annie is terrific. The script itself is rife with excellent gags, including a virtuoso scene catered around explosive diarrhea at a bridal shop, and the destruction of an over-the-top Parisian wedding shower. But through it all, Wiig’s Annie stands out as a representation of a person as opposed to a collection of neuroses. She’s disorganized but not clumsy, smart without being obnoxiously bitchy and self-destructive without being tragic.

And this is not even taking into account the other bridesmaids: There’s a friend-usurper who dazzles everyone around her (Rose Byrne, with passive-aggressive perfection), a housewife who likes to crack jokes about how awful her children are (Wendi McLendon-Covey), the pretty-in-pink romantic in her early 20s who’s headed for a disastrous young marriage (Ellie Kemper) and, my personal favorite, the large, overly confident tomboy (Melissa McCarthy). These are not the cookie-cutter females I’m used to seeing in a Judd Apatow-produced movie. I know these people.

The movie runs a bit long- there are a few scenes where the jokes could and probably should have been cut short, but looking back there’s not one scene where I didn’t laugh. This movie ruined me for any half-baked vehicle starring Kate Hudson or Katherine Heigl the moment when the housewife tells Annie what it’s like to have teenaged sons. “There is semen everywhere,” she laments. “I literally broke a blanket in half the other day.”

Speaking of which, what of the men?

Well, there aren’t that many. Besides the aforementioned douchebag and weirdo roommate, there’s an adorable Irish cop love interest (Chris O’Dowd), and Lillian’s largely unseen fiance. That’s it. That’s all. But you know what? It’s still funny, and funny in a way that both men and women can enjoy. Believe me, guys. I checked. I actually brought a man to the screening with me to make sure.

This movie isn’t going to give me equal pay, or ensure that no one roofies me at the next party I go to. But I hadn’t realized how brainwashed I was to the Heigl-vehicles of the world until Kristen Wiig came along and showed me what a movie about women could be. It can be vulgar and lovable in equal measure. It can be smart about female friendships and family and love.

And of course, it can tell a damn good poop joke.