It’s England in the 1980’s. A pert, sassy, working-class bird, sashays into the office of a stuffy, drink-sodden old English prof “I want to learn how to really see,” she chirps.

Even if you haven’t seen the 1983 film starring Michael Caine and Julie Walters, there’s a good chance you know what’s coming next in Educating Rita, an award-winner from the pen of Liverpudllian playwright and lyricist, Willy Russell.

There’s still fun in watching it play out live of course. Jane Pfitsch is vivacious, sexy and movingly earnest as Rita.  Thanks to costume designer, Nancy Brennan she sports some fabulous fashion to boot. Andrew Long comes across with all the huffing and puffing, eye rolling and dry, sardonic rejoinders that Frank, the professor, rdemands. The two have wonderful chemistry. They’re like a wittier, more glamorous Jane and Rochester. 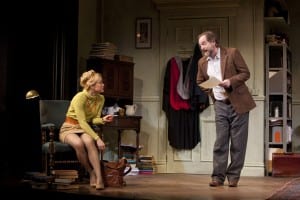 It’s fun; In spite of its forthright discussions of the meaning of life, though, it’s not much more than that. The characters sketched and their conflicts are familiar at this point. There’s a little Pygmalion going on and a little Woody Allen, in this male/female, old/young, rich/poor, mentor/student relationship with promises of topsy-turveydom.

In it’s illustration of class division, the enduring major theme of English drama, the play’s central conceit is that English literature as an academic subject is the study of the established taste of the ruling elite, rather than a sincere search for wisdom and beauty. The uneducated can’t understand or appreciate great literature, because understanding and appreciating are just euphemisms for uncritically parroting back opinions that have been jargonized and passed off as scientific assessments. Subjective feelings and opinions are irrelevant within this cold discipline. To pursue its study is the opposite of living poetically—feeling passion and living fully in the moment.

Elements of this critique still ring true—studying English can be about acquiring a certain type of discourse used only by the fellow educated, and about showcasing cleverness—but the idea that literature class is a crusher of personal identity, a repressor of the spirit, sounds pretty creaky to younger ears. Most contemporary English courses operate from the premise that there are no Truths to be gleaned from literature, only perspectives to be articulated.  You would certainly never hear Frank’s statement, to the effect of “you can’t bring Marx into Forster”  in a Modern Novel course at B.U. Literature is now largely valued every bit as much as material for examining class, race and gender as it is for studying the use of language or narrative structure.

As far as the traditional criticism that so-called great art is needlessly opaque and analysis is a pastime for the anti-poet, well, I’ll just say that I smiled throughout Educating Rita, it was fun to watch, but given a choice between a Willy Russell play and a play  that draws me into a genuine mystery, that asks me to confront a moral conundrum in my life, or that offers me an elegant symbol, one that represents something I feel I’ve known but have never been able to express, I’d say, Hand me the corduroy jacket with the elbow patches, I’m going in.