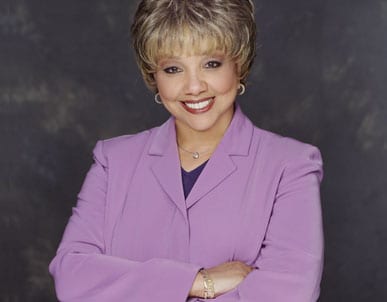 Simpson notes that she finds herself indebted to King, whom she came to know professionally early in her career. Inspired by King’s efforts to establish racial equality and fair housing in Chicago, Simpson strove to pursue social justice within her own field. Simpson has challenged and redefined industry norms, working tirelessly to establish fair labor practices for women and minorities within broadcast journalism.

Now Leader-in-Residence of Emerson’s College of Communication, Simpson boasts a career rich in achievement. Beginning as a reporter at Chicago’s WCFL Radio, Simpson went on to work as an NBC news correspondent and eventually anchored the weekend edition of ABC’s “World News Tonight.” While at ABC, she helped anchor the network’s live coverage of Nelson Mandela’s release from prison. In 1992, Carole Simpson became the first woman and first minority to serve as the sole anchor of a presidential debate. The career that was jump-started by breaking the news of King’s first crusade for equal rights has been long and successful, yet Simpson has never forgotten the inspiration of its catalyst.

In addition to the keynote speech, the event will feature performances celebrating cultural diversity and it will honor the Wellesley METCO Family Friends Program with the World of Wellesley Advancing Race Relations Award.