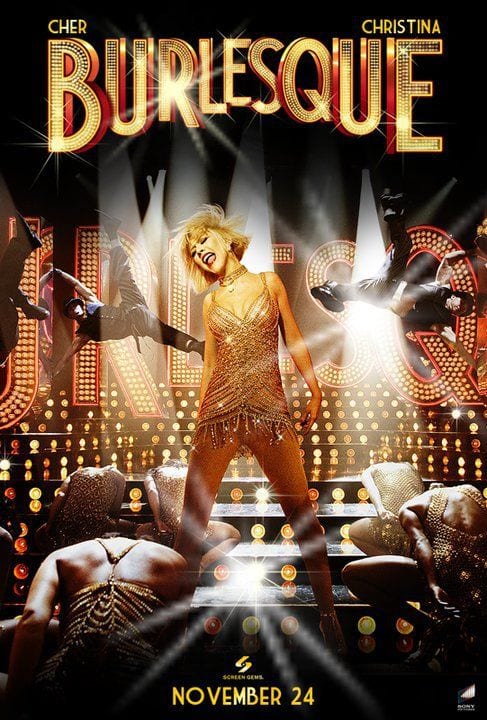 About halfway through watching “Burlesque” I realized I’ve definitely seen it already. The story of sweet young ingenue Ali (Christina Aguilera ) who finds herself working for a burlesque club in Los Angeles is mostly told through extravagant musical sequences cribbed from “A People’s History of Modern Coordinated Dance Numbers”. There’s a montage with Ali learning her dance routine while walking down the street. There’s a scene with her dancing in the Iowa restaurant where she works. There’s a scene of her being seduced by the shark who wants to turn her into a commodity. It’s “Showgirls” and “Flashdance” and “Moulin Rouge” and basically every other dance movie you’ve ever watched with your girlfriends while mowing down cookie dough and doing your nails.

I just can’t help it; this movie hits all my buttons. The musical numbers are exquisitely composed and beautiful to watch. I’ve been on Team Christina since I was 12 years old. She’s not a great actress, but she has presence and sass and can sing the hell out of every number she’s given. The first moment you see Cher (who plays the club’s beleaguered owner Tess), she’s standing regally among a pile of lithe young bodies, wearing a kicky little sailor hat like a crown. And Stanley Tucci steals the show every time he appears as Tess’ gay stage manager.

I mean really, its like they made it just for me.

It would even be better if it was just a series of music videos. The plot itself, involving Tess fending off a buyout offer by the aforementioned real estate shark (Eric Dane), is silly and almost extraneous to the showpiece numbers. So too is Ali’s romance with Jack (Cam Gigandet), the club’s bartender with a passion for guyliner. Writer and Director Steve Antin wisely keeps the these scenes short and to the point. He knows what we want to see, and it’s not a discussion of air rights.

What we do want to see, however, he delivers in spades. Aguilera nails a mix of performances from “Diamonds are a Girl’s Best Friend”, to “I Am a Good Girl” and “Tough Lover”. Aguilera is weirdly perfect for this role, with her tiny body and big, big hair, and sad eyes that make you believe she was the prettiest girl in her small Iowa town. As I said, she’s not an Oscar winner, but she can deliver a line credibly. Her big acting scenes are just placeholders for her music, anyway, so who cares?

Cher, though her face is now primarily held up with silicone and fishing line, still has a majesty and control that rivals all other divas. She doesn’t actually have a duet with Aguilera , and only sings twice throughout the movie, but she stands behind all the action like a master puppeteer. Its curious to look at her filmography and see that she mostly played working-class women, often single mothers or women wounded by fate. This is the first film I’ve seen her in where she was playing the Cher of the music industry- the fierce diva with killer legs and a killer voice.

“Burlesque” isn’t a movie that’s going to change the genre, and may not even become a classic the way that “Dirty Dancing” or “Moulin Rouge” have become. But it’s getting cold outside, and it’s getting darker earlier, and what better way to get away from your family during the holidays than going to watch Aguilera sing the crap out of “Tough Lover” in leather lingerie? Break out the cookie dough, wear your kickiest sailor hat, and go watch Cher and Aguilera do it all again, one more time.