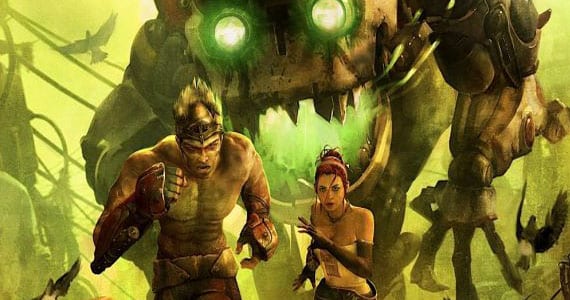 Ninja Theory, the developers behind the PS3-exclusive Heavenly Sword, is a developer seemingly obsessed with fusing

movies and games. Heavenly Sword was semi-successful at making an interactive Asian-flavored saga, though bogged down by its own heavy-handed drama and gameplay flaws. With Enslaved, the developer has reached a far better middle ground. There’s nothing earth-shattering or innovative about any of the individual concepts and features in the game, yet the overall sum of Enslaved manages to be a good deal more than its mere parts.

What holds this third-person action/adventure together is its two protagonists—Monkey and Trip. Monkey is an amazingly acrobatic brute of a man who unleashes hell on heavily armored robotic adversaries with his armored hands and energy bo staff. When not battering down foes, his climbing skills are what really earn him his moniker, and while he’s not quite a superhuman, he’s certainly close.

The relationship between the two starts on a slave ship where both are trapped. Trip hacks her way out, while Monkey uses his brawn. In an interesting twist, Trip has no interest in helping anyone but herself get off the plummeting ship. Indeed, she almost kills Monkey in the attempt, and when the poor bastard wakes up, he discovers that she has implanted a device on his head that forces him to follow her commands.

As it turns out, Trip wants to get back home, some 300 miles west, but knows she can’t make it on her own. So, she needs Monkey’s brawn. It’s through this remarkably adversarial start, that Enslaved manages to create one of the most intriguing, well-written, and—yes—romantic relationships you’ll find in gaming. Monkey acts and looks like a Neanderthal, but as it turns out, he’s one of most sensitive and understated male action leads ever.

The dialogue between the two is often subtle, and the animation from head to toe is so refined and detailed that much of the story, emotions, and communication between the two is carried through facial and body expressions. In a genre full of dialogue and events that hit players over the head and wooden, mannequin-like characters, this makes Enslaved surprisingly distinctive.

But enough about all the touchy-feely stuff. Enslaved might be completely story-driven, but it’s still an action game at heart. You take the role of Monkey through the entire game, and as far as bad-ass action heroes go, he’s got kicking robotic booty down. Combat in Enslaved isn’t complex—it’s the usual two-attack-button fare. Monkey can upgrade throughout the game by finding glowing “tech” orbs, which can then be used to purchase new abilities.

As you progress and upgrade Monkey, combat gets more interesting, but even right from the start bashing ‘bots is fun. The game manages to make the dismemberment of its blood-free foes feel as visceral and violent as your average God of War-style game. There’s a real heft to Monkey’s attacks that make it feel especially satisfying to perform a final brutal smash on the hulking metal masses. Boss fights aren’t particularly frequent or even varied, yet the combat remains consistently engaging for these larger battles as well.

Beyond battles, Monkey spends the bulk of his time climbing things. The game starts off in a New York City that has so long since been gutted and abandoned that’s it a bizarre mix of skeletal skyscraper remains and beautiful lush greenery. It’s a view of the apocalypse that has never been seen before, and aside from the sheer visual splendor, such landscapes provide ample opportunity for Monkey to act like his namesake. The game makes climbing easy enough—it highlights features that Monkey can use to negotiate his surroundings—though hardcore players will likely find too much hand holding. Monkey literally can’t miss or fall while climbing.

All the controls are intuitive, mostly because none of the gameplay is anything that gamers haven’t seen many times before. The levels are mostly linear, with only a modicum of exploration options, and there’s pretty much nothing in the way of branching paths. At times, the controls feel unresponsive as well—Monkey can get frustratingly stuck on small steps, and the game gets finicky at the worst times when letting you jump freely. The camera can also be frequently troublesome.

As mentioned, the game is a visual stunner. The levels are varied and gorgeous, with a color palette that defies the grim nature of the world. The voice acting is superb, and the musical score is amazing—evocative and subtle, while always suiting the action. It’s somewhat annoying that the story which builds the relationship of the two leads so well, manages to almost completely skirt around any explanation of what happened to the world. The ending, while satisfying, doesn’t quite mesh with logic either.

The Blast Factor: For single-player gamers, Enslaved is a surprising treat. Despite its flaws, the characters really make this an experience worth having. The relationship between Trip and Monkey is one of the deepest and involving you’re likely to find in a game. Combine that with the brutally fun combat and exploration of the beautiful levels, and Enslaved is one of the best games of its type since Uncharted 2.