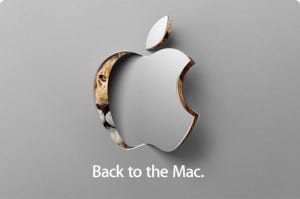 First, Apple added Face Time to the Mac. Now anyone with a mac can initiate Face Time calls with each other, and to users on the iPhone 4 or the latest iPod touch models. This is essentially just a revision of iChat, but now phones and iPods play too.

The biggest announcement was a preview of Mac OS X 10.7, dubbed Lion. Last week Apple sent out invitations showing a line, with a tagline, “Back to the Mac.” On the forthcoming release, they will incorporate elements of the iPhone and iPad. The biggest thing here is something many thought they would never do–introduce a Mac App Store. 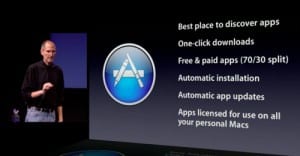 Now you buy apps for your mac, just like on your iPhone and iPad and such; some will bundle copies for all of your mac life. The problem with this, and why some never though it would come to this, is the closed environment that Apple p

romotes. This is another level of control for the company, who tightly control the submission guidelines. No way this becomes a hugely used replacement for finding applications, because the apps a lot of people use on their desktop wouldn’t make it into the mac. Mac says its desktop app store will be open in 90 days.

Apple also previewed several features of 10.7. Various aspects of Multi-touch will be incorporated into the new OSX, using either the trackpad on your laptop or one that is in the most recent generation of mouses. Mac will add home screens to the Mac, allowing for multiple desktops, similar to the iPhone/iPad home screens. Users will be able to use multi-touch gestures to flip through their home screens, as well as a new widget screen and expose, called Mission Control.

What do you think of these additions?