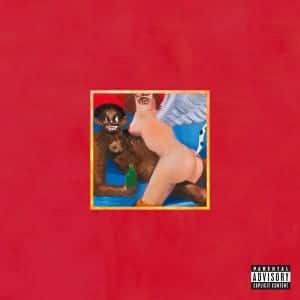 Kanye West has caused another controversy, this time over the cover art for his upcoming album, “My Beautiful Dark Twisted Fantasy.”

He tweeted last night, “Yoooo they banned my album cover!!!!!” with a link to the supposedly “banned” image, an NSFW painting with a bright red border in which a leering man clutches a green bottle in one hand while being straddled by a naked woman with white feathery wings, a polka-dotted tail, and menacingly sharp teeth. He said on Twitter, “Banned in the USA!!!.” “They don’t want me chilling on the couch with my phoenix… In the 70s album covers had actual nudity… It’s so funny that people forget that… Everything has been so commercialized now… So Nirvana can have a naked human being on they cover but I can’t have a PAINTING of a monster with no arms and a polka dot tail and wings.”

According to the Los Angeles Times, however, no one really “banned” West’s racy album cover, but Island Def Jam records “strongly urged” him to ditch the image, he “was told if he wanted to do it, the label would stand behind him.” In other words, he’s almost certainly just trying to stir up some extra buzz for “My Beautiful Dark Twisted Fantasy” is expected to be released on November 22.