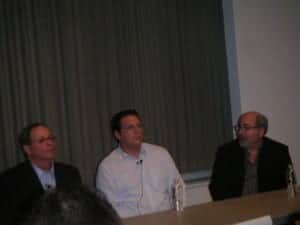 NEW YORK — Last week, The New School in NYC hosted “Music 2010: New Opportunities” at the Theresa Lang Center, The seminar focused on the decline of traditional music industry as every aspect of music has become available online. So, if you want to be an artist, what do you have to do to be successful? According to several executives, you don’t have to give up on your dream, but you need a modern perspective of how the industry works.

The five participants (and their clients):

Scharf moderated the discussion. He opened by saying that “artists are becoming more entrepreneurial by doing things on their own and controlling their careers.” Ritholz joined him by sharing how he got a lot of clients who started their own entertainment companies because big record companies have been doing not so well. The cost to make a record is parallel to the economy so, when artists start their own business, there are more opportunities by handling all the costs for making records. His advice is this: to be completely open to where you want to go because the role of music, in these days, is a little bit different from the way it used to be. Most revenues are coming from concerts, fan clubs, merchandise, and social media. So the development of downloading music has had a huge impact on a role of music as a financial source.

Schlueter said that it depended on the type of artists to decide if digital media should be used to promote music. It was actually convincing because most of the Def Jam artists have been using Ustream to cultivate their fan base by connecting with fans live.

Eichner said that “Great songs are coming from great artists and it’s not gonna change.” He pointed out, “It is not about the majors today and there are opportunities for smaller creative people.” Music business people want to help them to be successful in every aspect, such as marketing, concerts, promotion, etc. So, an artist has a great team of people around him/her, and “being an artist” is “being yourself” but it is a “business,” which means that there are some compromises. That’s where the great music business team comes in to fully support the artist. For example, when there are successful artists like Lady Gaga or Taylor Swift, there are also a lot of people behind them. He said his current favorite artist was Bruno Mars.

Feldman sort of brought up a new topic regarding networking. He just came back from a big event in Austin, TX. There was a new band performing onstage because someone recommended them to perform. It’s about networking; there are more people making music and more people listening to music because of the explosion of the internet and digital music.

Scharf jumped in the discussion by mentioning the important points for an artist to recognize: how you view your talent, what you will say, and who you are. Those are the crucial criteria to develop a unique persona. Obviously it is very hard for a company to listen take all the submissions from people who want to be artists so it is necessary for them to have both great songwriting skills and something great to say in order to be outstanding.

Schlueter started talking about how a teenage kid became a successful teen pop sensation. Yes, of course it was about Justin Bieber. An online buzz on YouTube made them to go find him in Ontario, Canada, bring him to Atlanta, and get him signed with Def Jam. He was definitely the topic that got people’s attention at the seminar.

Here, Scharf brought us back on the original track by saying, “Micro-market yourself if you want to be a live artist.” Networking is very important because you never know how you could find a person who is really helpful to you, which actually happens in a funny strange way most of the time, so it is always good for you to be out there.

Ritholz talked about fan clubs, which was fascinating. How are fan clubs actually working in the industry? According to Ritholz, it is basically for an artist to create a base, and a way of keeping contact with the fan base. It could be some exclusive merchandise or a close connection between fans and artists.

Ritholz also mentioned 12-year-old web sensation Greyson Michael Chance who signed a deal with a label Ellen DeGeneres started after his performance off youtube. He said, “There is no filter anymore. He could be a talent or just a freak.” The audience laughed but it was very true and really hard to draw the line.

Eichner and Ritholz agreed with this point; you have to have your “best” stuff out there and people would dig into your stuff more. Also, you should not think in a limited way about what your product is, but think about what you are creating in a broad way. So, their point is that you should be confident and do your best, no matter what.

Feldman used Lady Gaga as an example. She was dropped by a record label before she shot to stardom. She demanded the audience’s attention and had a desire herself.

Eichner added that Columbia Records dropped Jonas brothers and Katy Perry on the same day before they became successful.

Feldman also said that Taylor Swift in Nashville used to email all of her fans before she became famous whenever she was not performing onstage. So, obviously she was making so much effort into connecting with her fans and it all paid off.

During the Q&A, one audience member question the music industries revenues, after doing some independent checking of several financial statements released by Warner Music, Sony, and Def Jam. The man was curious how revenue was doing so well when the industry complained of a decline. Schlueter answered that it was mostly from downloading and also, Universal Music (Def Jam’s parent company) was constantly signing new deals. For example, they do not compete with iTunes and MySpace, but instead have a partnership.

Another man, who clamed himself as “a lead singer of the third generation’s heavy metal rock band,” asked the five music business executives how they could help him to have a unique brand. They answered, “You already do.”

Overall, since the industry has changed so much, if you want to step in the industry as an artist, you have to adjust your marketing style. You have to work hard and focus on networking, clearly define your identity, be sensitive to those possible opportunities, and be confident about what you are creating.