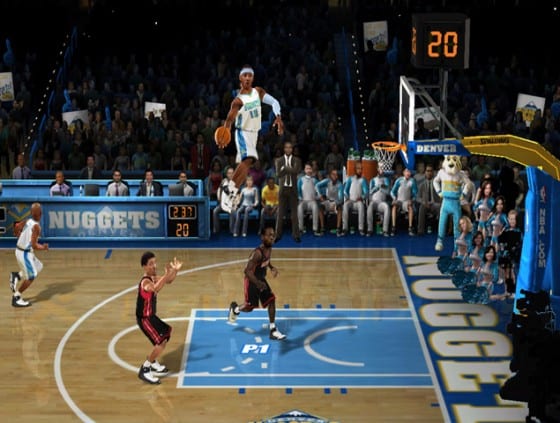 To those from my generation, NBA Jam is nothing short of a cultural landmark. When it was in the arcades, it ate up all

of your quarters, when it came to consoles, it kept us up all night. Then, we grew up. We favored full-on simulations with complex button systems and mechanics and realistic player tendencies. Ladies and gentlemen; welcome back to fun.

EA’s resurrection of the NBA Jam franchise is unapologetically fun and harkens back to a day when arcade sports titles were king. If you can forgive a few missteps from the developers, you’re sure to find much to love here.

First things first, EA has done a superb job of recreating the original NBA Jam experience we all remember – for the most part. The game’s original announcer Tim Kitzrow is back to shout his classic catch-phrases, and the visuals come off as an HD twist on a retro style. Yes, this is the original NBA Jam you remember, it’s just spruced up. Player faces are far more detailed than earlier versions (even if they sometimes come off as looking like South Park’s Terrance and Phillip at times).

The most important aspect that’s returned though – the game is still insanely fun. You could be the most hardcore sports sim fan of all time, it’s still impossible to deny the feeling you get dunking an alley-ooped ball from the free-throw line in the faces of your opponents. Games are quick, and you’re sure to have plenty of oh-my-god” moments with your friends. The highlight of the game is undoubtedly the back-board shattering yet physics bending dunks. Even after 17 years, the rewarding feeling of dunking it in someone’s places with a blazing ball is the same. Now that’s longevity.

When it was announced, some gamers were apprehensive that NBA Jam was (at the time) a Wii exclusive due to the inevitable inclusion of motion controls. While you’ll will have their choice between using the Wii  remote and nunchuck, the Wii remote by itself (held sideways) or the classic controller; it’s the later that is surprisingly the most effective. I’m not the biggest fan of adding motion controls where they don’t fit – but they work here. Using small, mostly sweeping motions you can do everything from passing to shoving, and even dunking. What’s even more surprising is the fact that the classic controller doesn’t fit the game as well as it should. The game’s reactions to the Wii remote and nunchuck were easily quicker and much more effective.

Quick fun and flash may be a specialty of NBA Jam, but depth is not. As much fun as the game is, it wears thin very quickly. You’re likely to see many of the game’s animations during your first game, and the title quickly looses momentum shortly after. NBA Jam is at its best when its life is prolonged by being  played with up to three other friends and letting the trash talk fly. There are a multitude of modes to be found in NBA Jam, but you’re likely to have the most fun with the classic campaign which finds you playing against progressively better teams in an effort to defeat the entire league.  There are a number of other modes, including a few half-court modes and boss battles, and while they do offer a change from the normal gameplay, they’re nothing special and you’re not likely to go back to them much.

When a game company brings a classic franchise like this back to life, they often go overboard – stripping the franchise of everything that made it so interesting in the first place in exchange for modern flash.  With NBA Jam, EA went the complete opposite route, leaving much of the original intact, but leaving out what makes this era of gaming so interesting. For instance, with NBA Jam’s core experience being built on multiplayer – where is the online play? I grew up playing this franchise with my friends and family and now that we all live spread throughout the country, it’d be nice to get that back, but sadly the game is local multiplayer only.  It’s a minor complaint when the game is this fun, but a valid one none the less.

The Blast Factor: EA’s NBA Jam rebirth is as much of a fun and exciting experience that we all remember from the franchise. It’s over the top, it’s flashy – it’s just what you remember from NBA Jam. There’s a few missing features like online play, and you’re unlikely to ever stray far from the main portions of the game, but those are all more than forgivable. NBA Jam is a must own for sports fans of all ages.