“Enron” is a smorgasbord of riffs on a notorious and epic corporate scandal. Well, maybe more of a tasteful office reception catering table—with a healthy dose of LSD in the mini club sandwiches. How else to explain the flashing lights and red-eyed dinosaurs?

There’s more to chew on in this play, however, than just the visual effects. It also serves up some juicy commentary. In this, the play’s U.S. regional premiere, the dynamic performers and production team of Zeitgeist Stage navigate some of the most painful moments in recent corporate history with undeniable flair and skill. 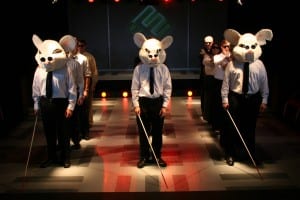 Unfortunately, like any buffet, there are dishes you’d like to skip. Playwright, Lucy Prebble, tried valiantly to cram nine years of controversy and American history into one play. Its resulting 2-hour-and-40-minute running time muddles its potential effectiveness. Prebble wrote the play primarily for U.K. audiences, so she may have wanted to include parts of American history that haven’t been hammered into Brits’ conventional wisdom (i.e. the 2000 election), but there are many scenes that could have been cut to make for smoother transitions in the hectic timeline of Enron’s rise and fall.

That being said, the 15-strong ensemble—only four of whom are principles—make the best parts of the script shine, whether they are celebrating a stock win at the end of the day, leading a sometimes harmonious barbershop quartet or playing a little girl in one scene and a dinosaur in the next. Greg Farrisi’s strangely loveable portrayal of Andrew Fastow, the socially awkward cover-up mastermind, stands out among the principles, though Erin Cole and Bill Salem as Claudia Roe and Ken Lay, respectively, seem to have been plucked straight out of the corporate culture. Victor Shopov has moments of brilliance as an intense Jeff Skilling, although we see too few changes in his emotional state. 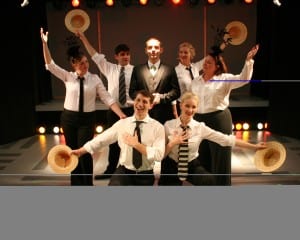 The best scenes in “Enron” occur when the large cast unites in choreographed scenes interspersed with sound bites and images from the 1990s, courtesy of choreographer, Wendy Hall, sound designer Walter Edouardo and projection designer Thom Donn. Credit is also due lighting designer, Jeff Adelberg, who has lit the black box to evoke the inside of a computer, even using fluorescent lighting in some scenes to evoke office doldrums.

“Enron” calls for a delicate balance between the realistic and the fantastic, as it stretches itself over a formidable timeline. Sometimes energy is lost in clunky transitions and momentum wanes, but when it works, it really works. Even the production’s weaker moments are punctuated by a vibrant theatricality, using spectacle, humor and traces of genuine humanity to tell of an increasingly common phenomenon: the white-collar crime tragedy.