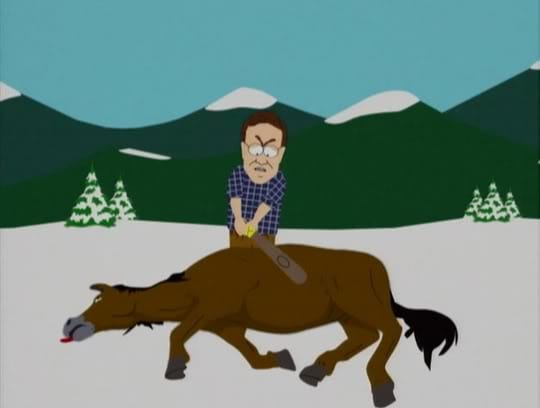 In 1997, 50s and 60s pop singer Pat Boone released In a Metal Mood: No More Mr. Nice Guy, an album of Heavy Metal covers. A far cry from the crooner’s normal work, the album, complete with Boone in choke collar looking menacing was an obvious final cry for popularity, so Boone could enjoy one last shot at popularity with a younger crowd.

Warrior’s of Rock, the latest iteration of the long running Guitar Hero franchise is much like Boone’s metal album; an obvious attempt to stay relevant amidst a changing cultural landscape. Yes, the franchise was once the biggest franchise in gaming, but it’s clear that over five years since its debut, the franchise is in dire need of a reboot.

Perhaps the worst part about Warriors of Rock is that it showed potential to advance the series, but only manages to show the franchise’s age even more.  The game’s main draw is in its new Quest mode, which puts you in control of one of eight characters (All but two of the characters return from previous installments) looking to unlock their true warrior potential. Just how do they do that you ask –apparently by recovering a mysterious powerful guitar that in turn revives the demi-God of Rock as voiced by Gene Simmons of Kiss fame. The mode is filled with campy metal themed visuals and you can’t help but think that Activision finally realized they should have published Brutal Legend in the first place.

Story aside, how you really progress through the game’s quest mode is by doing exactly what you’ve done in previous Guitar Hero games, playing your instrument of choice through enough songs to complete each chapter, move onâ€¦repeat. There are a few kinks thrown in to put a few blurbs on the back of the box, like the boss battles, special powers and a seemingly random rendition of Rush’s 2112, but they do little to add to, or detract from the Guitar Hero formula, it just is.

Warrior’s of Rock’s track list harkens back to the older days of the series with a more hard rock flavored repertoire. Look, it’s not that I’m dogging playing some of the mainstream and poppy acts of recent editions of the game, they just weren’t as fun to play. Still though, the set list isn’t without its fair share of problems though, chief among them that the game splits up the list by character this time, which in turn breaks up the track list by genre. Don’t like death metal? You’re going to hate an entire section of the game. The same goes for merely every genre of rock. At least when the songs were divided up by difficulty you could lay claim to at least liking one of the songs in a section.

While playing through Warrior’s of Rock’s set list, you can’t help but get the feeling that the developers seem to be scraping the bottom of the barrel when it comes to track selection. Terrible live versions of ZZ Top songs covered by Metallica? No thanks. Especially not when the original song was in one of the previous games and was so fun to play. It’s almost as if the developers were hoping that gamers would rekindle their love for these classic set list hits in order to look over how boring these versions are to play.

Much of Warrior’s of Rock feels like a stretch to appeal to someoneâ€¦anyone. In the process though, the developers throw so many rock clich©s and standards in that the game loses any sense of identity. As mentioned above, the quest mode is narrated by Gene Simmons (along with a bit from RUSH) but there’s a segment where you play through such historic punk venues as CBGB and OMFUG. Yes, I get the cultural importance of the venues to the world of rock music, but it just doesn’t fit here in a game filled with heavy rock and big budget shows. It feels much like a loud cry from the developers to stay relevant. It’s the video game equivalent of your parents suddenly showing up in a Ramones t-shirt so you’d still think they were cool.

The new guitar for Warrior’s of Rock is just as reliable as you’d expect a plastic peripheral to be, but here — the sides split off to formâ€¦an actual axe. It’s a cool ascetic, but it’s just that, and serves literally no valuable in game purpose. Curiously enough, the guitar features no touch pad, as made famous in Guitar Hero: World Tour, though several of the songs feature sequences built specifically for it. It almost makes players use older guitars when playing the game if they’re available.

Guitar Hero made its debut in the Fall of 2005, and has since seen more than 13 different iterations and spin-offs — that’s more than two different games every year. Once the most important game to the video game industry, the series has become stagnant and needs an obvious reimagining. My advice to Activision? Take a step back, take a year or two off without releasing a Guitar Hero game because it’s games like this that remind us why Rock Band is so good.