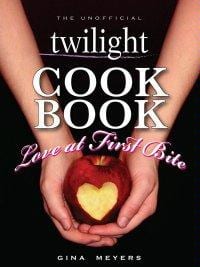 Twihards looking for a late night snack should probably not turn to Love at First Bite: The Unofficial Twilight Cookbook. If the overused vampire connections and out-of-context quotes leave Twilight fans a little less than satisfied, the recipes in the supposed hunger satisfying paperback border somewhere between inane and humorous. It is eclectic in the worst possible way with recipes ranging from broccoli salad to butterscotch bars, and coke slushy; with only some of the recipes actually being connected to Twilight.

Charlie’s Fried Eggs is the first recipe, and it is actually just a recipe for a fried egg. Author Gina Meyers told Blast that she had wanted to put in recipes like the fried egg and Jacob Black’s Grilled Cheese Sandwich in the cookbook, because she wanted beginner cooks to learn how to cook. That is admirable, but probably something that a Youtube video would do a better job of explaining. In the age of the internet, cookbook authors need to find a way to show the world they are offering something more than what is online. This cookbook unfortunately fails at this task.

Aside from the over simplicity, flipping through the pages of Love at First Bite left the foodie in me completely uninspired. Even dishes that appear to be creative are playful facades for casserole dishes any home cook could have created by throwing the contents of a refrigerator into a pot. Mushroom Ravioli is one of these dishes. At first glance I hoped for a recipe involving a mushroom filling and fresh pasta dough. But the first ingredient was 10 ounces of mushroom ravioli. After feeling completely baffled as to why one would buy mushroom raviolis for a mushroom ravioli recipe, I looked at the rest of the recipe, which involved heavy cream, Parmesan cheese and two different varieties of mushrooms. It looked heavy and rather unappealing even for the most dutiful lover of mushrooms.

Appearances also left more to be desired in Love at First Bite. The pictures really added nothing to the value of this book. All of the pictures are black and white, which does put them at a disadvantage. But my biggest qualm with them is that they really don’t add to the recipes. Sometimes it is hard to imagine recipes and pictures are a nice way to tantalize a little bit more. In this cookbook, the pictures just added to the elementary style of the recipes. Stuffed Bella Peppers is accompanied by an out-of-focus picture of stuffed peppers on a flowered plate with a keychain poking out in the corner.

The last 43 pages of the cookbook are filled with party planning tips, Twilight trivia, cast lists, and a Bella prom planner. These pages could have been a great addition to help plan a fun Twilight party, before going out to see Eclipse for the third time this week. But what are you going to make? The recipes are not organized to plan a party. They are simply a bunch of recipes with names like, I Dare You To Eat Pizza, Edward and Twilight Tribute Punch. This cookbook will leave even the biggest Twihard wishing for a break from the fandemonium.