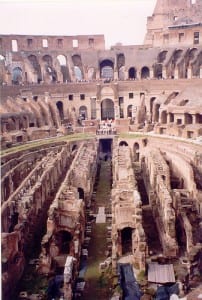 ROME — From August the dungeon under one of the more famous monument of the world will be open to the public. A guided tour of the famous "ipogei" which will take visitors into a fascinating journey into the past. For the first time ever people will have the unique opportunity to see the place where the lions were kept and walk down the corridors leading into the heart of the arena where the gladiators used to fight to death. An unforgettable experience which will bring the Colosseum alive to the visitor and help him see it through the eyes of an ancient gladiator. The network of tunnels under the main arena floor consisted of several corridors with varying functions.

One tunnel is thought to have led straight to the Ludus Magnus, the gladiatorial training school next to the Colosseum. Other passageways would have stored animals, some of which would have been imported from northern Africa, while others were designated as exit routes for disposing of dead bodies after the shows.

For the first time, you will see the advanced engineering of the Ancient Romans: the reconstructed underground machinery and the cruel ways of turning death into a show. For the visitors this will be a good experience from the heart of the amphitheater.