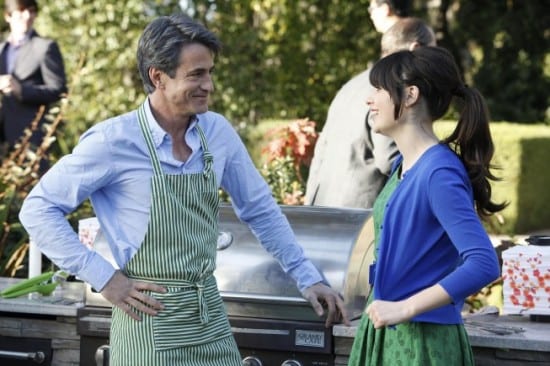 Class differences intimidate Jess as she dives into a romance with a wealthy father, Russell (Dermot Mulroney).

While I wouldn’t call “New Girl’ mindless, I would never expect the show to tackle larger social issues on a macro level. If Jess had watched the “Kony 2012” video and been outraged they could have gotten some mileage out of that. Or perhaps Nick runs out of gas, but refuses to pay such exorbitant prices so he starts hitchhiking to work. I’m just spitballing here, but “New Girl” is a show about twentysomething struggles that are highly attuned to the neuroses of their “core four” and is only interested in social ills in the context of how they throw a wrench into the delicate balance of their shambled lives.

That said, I can reluctantly forgive the reductive way in which the income inequality gap was addressed in “Fancyman (Part 1).” I mean, how could you take an episode with that title seriously? It might as well have a fake mustache and be “making it rain” with Monopoly money. I’d be lying if I said it didn’t it anger me when Jess’ new love interest, Russell (played with the usual silver-haired debonair by Dermot Mulroney), instructed Nick that he didn’t have a lucrative job, or at least a formidable credit score, because he hadn’t grown up yet and was still a lazy, unmotivated kid. Essentially, he recycled the “pull yourself up by your bootstraps” cliche, which on a societal scale is far too simplistic and paints the majority of Americans (therefore much of the 99% bunch) with a broad brush.

However, when you consider Nick as the sole test subject, Russell hit it on the nose. Nick was enrolled in law school and dropped out. Though the show has yet to fully pin down his reasons (if he was miserable, I wouldn’t want to commit him to a profession he hates), he had opportunities offered to him that he refused to take. If I were asked to engage Russell in a discussion about the acquisition of his wealth, I would vehemently oppose the idea that everyone    can succeed as he has in the current economic climate. Thankfully, he’s fictional, so I can dismount my political high horse. I’ve made my peace with what I perceived was an insult to the Occupy movement’s outrage with corporate greed. I realizied that Russell and Nick are the smallest of samplings and it would be equally presumptuous to say that Nick is poor because he’s been mightily oppressed when all evidence suggests he’s stuck himself in this rut.

While implied political statements may have distorted, for me, any message to be gleaned, there were successful moments of character. Nick popped out of his misery-shell once he entered Russell’s man castle, seduced by his symbols of power and Jess faced her fear of men who “have it altogether” and therefore won’t need her caregiving abilities. Winston still gets shafted again though with the standard “she’ll love you for who you are” lesson, which didn’t ever seem to be an issue for him. Though he’s searching for an identity now that his basketball career has fizzled out, he’s never exhibited insecurities so much as a competitive streak. And Schmidt delivers a barrage of snaky remarks from the peanut gallery after being the center of attention last week.

Russell strolls into Jess’ classroom (rocking a bowler hat and a Mr. Monogamy name tag that’s somehow related to teaching sexual health) with fatherly concerns about his daughter, Sarah (who never appears strangely) and whether her focus on art has made her deficient in more practical areas of study. Jess resents Russell’s insinuations rejecting the stifling of creativity in favor of hunkering down on math. Regardless, the principal acknowledges that since he’s the third biggest donor to the school he deserves a say. Jess then rallies around Nick’s anti-rich stance, “We’re right where they want us, suckling on the teet of consumerism.” Fired up for her mini-Marxist revolution, she’s literally stalled when her car breaks down on the way to give Russell a dressing-down. Conveniently (as in TV-convenient) Russell happens to be stuck behind her and offers to have “his guy” tow her bucket and let her borrow his ride. Insulted at first, Jess is eventually persuaded by the smooth operator to accept his offer of kindness.

A confused Jess consults Cece about being entangled with someone of Russell’s status: “I only like guys who are free from success and think someone famous stole their idea. I like an underdog.” Sensing a destructive pattern, Cece suggests Jess date someone she doesn’t need to baby. This is an astute observation, and one I’m glad the show addressed. Despite the initial premise conveying that Jess would be the chaos introduced in the lives of three gentlemen, she ended up becoming the caregiver they DESPERATELY needed. The formula where the gang bands together to support Jess has been abandoned in the new calendar year, and now that Jess has gotten her sea legs she’s spicing up the complacency that had cast its shadow over the loft before she arrived. All the same, upholding the role of mother hen is not the healthiest way to construct a romantic relationship. Cece’s reality check then does the doubly important task of jolting Jess and furthering the mission statement of internal change we’ve been seeing across the board.

Nick then accompanies Jess to Russell’s palatial mansion for moral support. After mocking his kitchen decor, he enters his home office and is awestricken with its manly atmosphere—and smell, “It smelled like Shakespeare, if he were a damn cowboy, and boat fuel and cigars…man stuff!” This was the funniest portion of the episode because of how it transformed Nick into a willful victim of materialism. Corrupted by leather furniture and a wooden desk, we saw a side we’d never seen. Nick has had his goofball moments no doubt ( the “Bully” episode where he drives away Julia with his seven-voicemail panic attack), but the focus wasn’t on over-the-topness this time around, but an unresolved desire of his to command men, be self-made.

While Nick played pretend, Jess finally gets her confrontation. After being assaulted by a Japanese bidet, she says that she doesn’t care if he pulls the donation. She is going to teach her students how she sees fit. Russell never had that intention though, and he’s puzzled as to where Jess’ resentment comes from. After storming out, Nick convinces Jess to not be intimidated by his wealth—admitting he could be saying this because he’s in love with him (but really his things). Jess consents to have dinner with “Fancyman” opening the door of the ominous part 2.

As mentioned Winston gets a lame excuse for a plot, another fit of taking competition too seriously. This time it’s bar trivia, which Schmidt dominates. His sarcastic belittling cracked me up, especially when he admits to saying some pretty douchebag jar-worthy things. Also tacked on is our re-introduction to Alvin, that kid from WAY BACK in “The 23rd” where Schmidt’s boss offers him the job as part-time nanny. We have never seen him with the kid and it angered me because I never knew he took the job. There was the first really egregious continuity error as far as I can recall, and it didn’t affect any of the comedy or plot severely, I just wish the kid hadn’t dropped off the face of the earth. Couldn’t they have incorporated some silly excuse for why he hasn’t been around into the dialogue? *Deep breath* I suppose, I’ll just let it go. At any rate, his charge helps him study, with some hilarity, but ultimately he can’t beat The Master of All Knowledge, Schmidt. Obviously his old flame that he hopes to rekindle, Shelby, couldn’t care less about his prowess at stupid bar games. She didn’t need to even be impressed. She just wanted him. Awwww…Then the moment is promptly  killed by Schmidt, asking if he should play some Jodeci while they makeout. You’re so down, my brother.

Since I can’t completely ignore how their perspective on class issues irritated me, last night’s episode was up and down. Nick was a bright spot with his obsession over Russell’s possessions, and Jess’ progression as an eligible bachelorette was pleasant to witness. But with my boy Schmidt in the background and Winston still getting the short straw, this week will suffer the consequences of the unfair distribution of wealth. Try harder “New Girl!” Clearly those other critically acclaimed shows are putting forth more effort! Ah, if only the sitcom game were like the American economy, huh? Oh wait….With an inadvertent splash in the koi pond, New Girl stumbles into Part 2 of Jess’ misadventures with Fancyman, with a B-.

– Winston knows Nick isn’t making a populist statement by not owning a cell phone: “You were denied a cell phone because you have the credit score of a homeless ghost.”

– Jess: “Yeah! I’ll throw my phone in the fiery chasm where he keeps his poor people!” Nick: “Actually scratch that. My mom has your number in case of an emergency.”

– Winston: “I know what Mesopotamia is.” Alvin: “Use it in a sentence.”  Winston: “Look, there’s Mesopotamia!”

– “A kitchen island? Be a man, let your kitchen counter attach to itself.”

– “When I touch this desk, I feel sexually proficient for the first time in my life.”

– Nick strokes a wooden duck: “I wanna kill you, because I respect you. (shouts to Jess) I think I understand hunting.”

– “I hope you’re better in bed because your street work is embarrassing.”

– Entire end-credits sequence, where Nick pretends to be various executives seated at Russell’s desk, had me in stitches. A couple gems were: “Yes, this is the president of Earth. I’d like to speak to the galactic emperor? Yes, it’s about money” and “So is China mine, Mr. Ying?