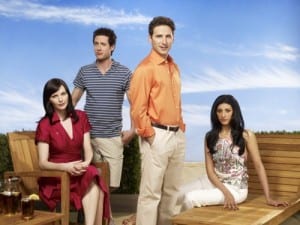 With anticipated season premiers debuting on rival networks, USA network had its work cut out for it this summer.  However, with its dark horse cult classic "Burn Notice" returning for a fourth season, apparently the network decided to rest on its laurels and let their other original programming fall by the wayside in terms of wit and plot quality.  This is most noticeable with the Season 2 premier of “Royal Pains.”

The season 2 opener starts off by reviewing the mediocrity that took place in season one:

I couldn’t cut it as a doctor for the working class, guess I’ll just have to work for the R.A.H.â€˜s (Rich As Hell’s) in the Hamptons.  But here’s the kickerâ€¦I make HOUSECALLS!!!! Now that’s what I call a twist!  But uh oh, the Millionaire who is completely funding my career doesn’t completely have faith in me! What do I do? Hope I can get enough clients to pay my medical expenses out-of-pocket so I can keep this hoax of a career going! (Question: Who the hell has a 4 million dollar home in the Hamptons, but doesn’t have an HMO?)

In case you’re new to the show, it stars Mark Feuerstein who plays Hank, the main character still questioning his skills as a doctor after he loses a patient. Hank must find a way to support his struggling new "House call MD" business, pay his phenomenally gorgeous Physician’s Assistant, Divya played by Reshma Shetty, and somehow keep his frat boy brother/Chief Financial Officer in check.  Hank’s brother, Evan played by Paulo Costanzo (yeah, the stoner from “Road Trip”) does an adequate job in the series portraying himself as the lovable scam-artist, who can talk his way into anything (except a decent series).

There isn’t a large, cliffhanger form season 1 to resolve, making the premier somewhat lackluster. The biggest unresolved problem is that Hank and Evanâ€˜s Dad has ripped off whatever working capital they had in a shady transaction for an EKG machine. Hard-hitting stuff. The financial blow sends "Evan" into a whirlwind of emotions and naivety, culminating with a reuniting of father and sons at the show’s conclusion.

The episode’s sub-plot is focused around a man who has inherited a mansion from his father, an inventor of innovative products.  The son, Spencer, an infomercial spokesperson, (think: a younger, fatter Ron Popeil) hires Hank as his personal doc.  Spencer experiences a series of curious symptoms but only has them while in the basement of his newly acquired multimillion-dollar estate.

With the first episode under wraps, the acting is promising, but if the writing continues to be a watered down “Burn Notice” knock-off, then I’m sure it will go the way of “White Collar” What’s that? What’dya mean, “White Collar” is still on the air?