It seems as if we say it every year, but the 2010 Electronic Entertainment Expo, E3 2010, is sounding like it’s going to be the show for publishers, developers and fans.

E3 is a trade-only show however, and being a super-huge-Halo-fan, does not get you in.

Thankfully, Microsoft today announced a partnership with MTV (that channel that used to play music videos) to air, commercial-free, the Microsoft press briefing as well as their Project Natal event.

That Project Natal event is being dubbed as  “a spectacular live performance imagined by Cirque du Soleil,” and from what that performance is known for, it’s going to be a spectacle indeed. According to the press release, it’ll include “cutting-edge technology, pulsating music, amazing puppetry, futuristic video projection, and unbelievable physical dexterity.” 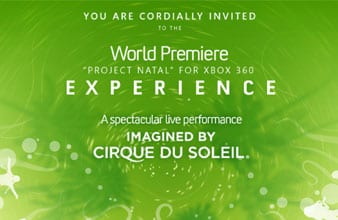 I’ll be at the show, but if you aren’t, take a look at the programming schedule below and line up those sick days now!