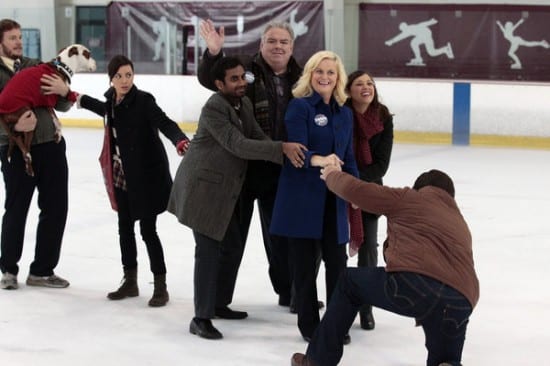 The gang shuffling their candidate across the ice not-so gracefully.

One of my many media consumption resolutions for winter break/the new year was to re-watch seasons 2&3 of “Parks and Recreation,” for two reasons. One, it’s my favorite comedy currently on TV. With “Louie” on hiatus it is hard to compare, but P&R is certainly in a heated battle for #1. Two, in reading a few year-end lists of my favorite TV critics I saw that the show was consistently in the top 5. Besides feeling validated that my opinion is in accordance with the “professionals” I was immediately curious about the rationale. I have only reviewed two episodes from season four thus far, and I know why they were A-quality episodes for me, but what made season 3 (the full season aired in 2011) so A-quality that it caused Alan Sepinwall to leapfrog “Breaking Bad” and crown it the best show of the last year?

What I immediately realized about Parks and Rec’s excellence was not necessarily something you can learn workshopping scripts. P&R has harnessed the ability to cultivate friendships—with the audience. Whether you are writing a film, a short story, novel or TV pilot you learn quickly that no one will care unless you can write characters that people will want to invest in. Leslie, Ron, April, Andy, Ann, Tom, Ben, Chris and even Jerry are all my dear  friends, and I cherish any time I get to spend with them. It’s not as simple as empathy, because at times these characters can be jerks, fail miserably, or be a shell of  themselves. But despite them falling short of your expectations you will love them anyway, and root for them to return to their most promising attributes.

Tonight was one of those episodes. None of our favorite people were firing on all cylinders. In fact, Ben and Leslie both got glimpses of the bottom, but just like the rest of the team, we wanted to stick by them. In most comedies, one of our main characters running for office would merely by a long setup for some killer payoffs where shenanigans ensue. But we want Leslie to win. She is the best thing about Pawnee, Indiana’s government and she would only bring the town to new heights, but she isn’t infallible. She is going to hit rough patches. But even though this is a comedy, we don’t wanna laugh at their failures. What we want is to have a hell of time on the way down.

“The Comeback Kid” refers to Leslie’s newfound identity as she re-launches her campaign. After bringing her relationship with Ben into the light she is polling horribly and her bigshot campaign team has abandoned. In their wake, the Parks and Rec department (and Ann) have decided they will not allow her to throw in the towel (like a Jon Huntsman, but with friends). Leslie declares her bestest friend, Ann (Rashida Jones) her campaign manger despite no prior knowledge of politics. Leslie then tells her she is pretty and that she will help her anyway. Her rationale that most murders are committed by professionals was typical Leslie pontificating without thinking it through. Her positivity is ramped up when Ann lands “Pistol Pete”  Disilio, a local sports hero to endorse her. Elated, she attempts to break dance as everything seemingly falls into place.

Ben is looking to make a comeback also, into respectability. Since resigning, taking the blame for his illicit relationship with Leslie, his production level has been dangerously low. Ben, however, disagrees when Chris (Rob Lowe) comes over to lift him out of what he perceives is “massive depression.” Ben continues to deny as he shows off his new recipe for calzones (a callback to an awkward conversation with the police chief where he expressed his love for the more practical and functional pizza alternative), and his foray into Claymation, or “Claymaysh” as he so coins. This B-plot might even be stronger than the main plot simply because it allows Adam Scott to be obnoxiously pitiful, and joyfully oblivious. Later on, Ben painfully tries to convince Chris that he is fine. He outlines his plans for Lo-cal Calzone Zone. in his confessional Chris admits it is literally the worst idea he has ever heard. Undeterred, he showcases his Claymaysh piece de resistance, “Requiem for a Tuesday.” When he actually watches, he is baffled and embarrassed. In three weeks he had only filmed his clay likeness getting out of bed, he breaks down and admits his deep depression.

Leslie’s rally starts to unravel when Pistol Pete refuses to dunk for Leslie. Apparently, dredging up his past is painful for him, and he wants to endorse her as his current self and not as his 17-year old, basketball star self. Across town Ron is pulled over in a rented truck trying to transport the materials for her stage. Ron, in rare form, gets the opportunity to dispute the law with the officer claiming that there is no “real” law that he is breaking. Except like four of them. OH! And guess who is along for the ride? Well, Tom, but also Andy and April with their new three-legged dog Champion. “Because he is the World’s champion of three-legged dogs.” Leslie motors over to save them, while leaving Ann to convince Pete to pull the old routine for her. What they both find out is the situation is much worse than anticipated. Ann uncovers that Pete is traumatized by his past because of how his father treated him. Leslie discovers that because the back of the truck was opened most of the wood, and part of the banner was Jetsons-ed (as Andy does not know the word jettisoned). Therefore, she may not have her star endorsement, a big enough enough, or a banner that shows her whole face.

When they arrive at the Pawnee Sports Center, the debacle continues. Thinking she is without Pistol Pete, Leslie rallies the troops, trying to adjust. But, alas, one more hurdle. When April called she forgot to mention they would need the basketball floor, but since the hockey team used the facilities most recently she must walk across ice to her minuscule podium, thus ushering in the funniest scene of the episode. No bunch like this one can quite execute this kind of slapstick. Between Champion peeing in Ron Swanson’s arms, Andy falling on his face, and all of them hoisting Leslie onto the tiny stage while “Get On Your Feet” plays in the background, it was truly an amusing struggle. As Leslie begins to fumble over her index cards since they were jostled while she was lifted onto the platform, Pistol Pete arrives! Thankfully, in an agreeable mood, he delivers the cheesy “Voting for Leslie Knope is a slam dunk” line and even attempts to dunk. I say “attempts” because he lands square on his tailbone due to the inherently slippery quality of ice.

Bringing both Ben and Leslie’s snafus to a resolution, Leslie predictably fires Ann, hiring Ben as her campaign manager. As the clearly more knowledgeable applicant, she discards any fear that his presence would be “poison” for her image and Ben willing takes the job despite Chris’s protective refusal. He needed a task, and she needed a stable expert. All is well for this charming couple as we’d hoped but they ride was as bumpy and delightful as we’d hoped.

Despite the unsurprising grasp these writers continue to display when writing for these band of misfits, it was just shy of a knock ’em dead episode. Don’t get me wrong, this episode ups the ante for the amount of great lines/line deliveries. The Pistol Pete uses Ann as shrink bit fell flat though. It was a clever premise with no real meat to it. Any laughs were in theory as most of the interaction was off-screen. Also, with the sugary sweetness that both “Trial of Leslie Knope” and “Citizen Knope,” added to the mix, an already flawless recipe, my expectations were mighty high. Yet the time spent was an undeniable treat with a treasure trove of cackle-inducing lines and a “Dawwww” payoff at the end that revved up much of my sentimental attachment to this season. Feel-good, yet damn witty, and at times side splitting. Just how I like it. Therefore, since P&R’s staff continues to nail the authenticity of not only each individual’s quirkiness, but the group dynamic and all its sincerity I proudly grant the new year’s re-introduction to Pawnee politics with a A-.

– Libertarianism courtesy of Ron Swanson: “I don’t wanna pain with a broad brush here, but every single contractor in the world is a miserable incompetent thief.”

– “What’s that in the sole of my show? Red carpet. Everywhere I walk, I’m walking on red carpet.”

– “The past is great! Jitterbug, stagecoaches, Herman Munster.”

– Where are you? My mother’s butt, yeah that’s helpful.”

– “I’m kind of tearing this Claymation thing a new one.”

– “Windows are the eyes to the house.”

– “Together we can beat…obese children. No wait…”