If you’ve ever wondered what a game inspired by gruesome Quentin Tarantino and Rob Rodriguez films would look, sound and play like, wonder no more, as klei has made the game and “Shank” is it.

Last weekend at PAX East in Boston Klei had its game on the show floor. Crowds of eager gamers huddled around it all day to wait their turn to slice, dice and mangle enemies left and right. The build of the game on the show floor was the one at PAX in Seattle. We loved the game then and we still love it now. 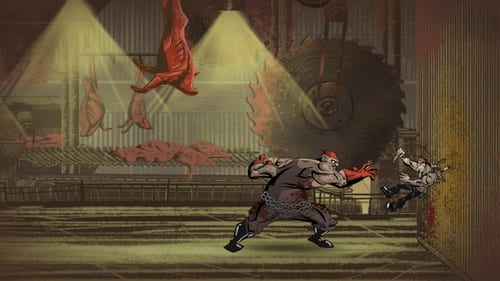 But Klei showed us a new level. It had engaging enemies, a parkour element to it and one heck of a boss sequence in which I was tasked with taking down a mega brute in a meat hall by snapping his neck with a rusty chain.

I loved every minute of my time with “Shank,” but in an effort to more effectively communicate the game, we shot video of the level and it’s embedded below.

Some of the more satisfying moments of the game were its varied and plentiful manners in which you can kill enemies. Stuff a grenade down his throat (yes please!) and watch his eyes bulge right before he sees breathes his last, ram a rusty chainsaw into his gut, why not?  You can also dual wield pistols and swords to wield bad-assery upon your foes.

The most exciting facet of the game, for me, was its violence. As you’ll see, I didn’t finish my playthough until every enemy, or what I deemed to be an enemy (rats!) was bleeding out on the floor or thrown off the ledge of a skyscraper.

There’s a heck of a lot to love about “Shank.” It comes to the XBLA, PSN and PC this summer.