The original Endless Ocean was a special little title that many people missed upon release. The aquatic explorer was unlike almost anything else on the market at that pointâ€”it was a game that, in many ways, wasn’t a game at all. You swam around in reefs, discovered, pet and fed fish, enjoyed the detailed, realistic scenery of the ocean–all while learning about aquatic life in the process. It certainly wasn’t the kind of thing you see on the wish list of today’s gamer, but despite this, it was a relaxing retreat from the missions and the violence we all love so much in our video games.

Endless Ocean was something of an ocean sandbox where you generally spent time free of direction, free to do as you pleased. This did not sit well with many gamers though, as even open-world games have some sort of structure to them. Endless Ocean: Blue World, this year’s sequel from developer Arika, fixes that issue by focusing more on story and giving you more direction in your gameplay. They do this without sacrificing the things many folks loved from the original as well, which makes this sequel a better purchase for both fans of the original and the uninitiated.

All of the things you love from the original are intactâ€”you can still take photos, the descriptions of sea life that you can read as you discover them, hidden locations that you must dive to discover, and the multiplayer, which allows you to dive with a friend online. This time around though, Wii Speak is supported, so you no longer have to quietly dive underwater, as calming an experience as that may have been. Now you can talk with a buddy, which makes things easier if you’re trying to direct someone towards an area or creature. 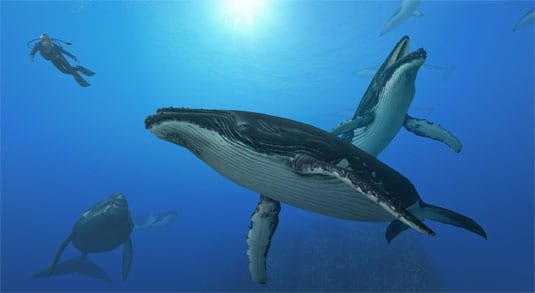 As for the story, your character, who you create with the very simple character creation, joins the R&R Diving Service in order to learn more about the Song of the Dragons, which is a song of legend that is said to be cursed. Conveniently enough, the diving company has ties to the song through pendants left to the owner’s granddaughter, a fellow diver. The story is entertaining, though mostly because it’s ridiculous and good for the occasional laugh. The highlight of the game remains the diving and exploration under the sea.

This time around you have some gadgets at your disposal. First is the Multi Sensor, which is a sonar device that helps you locate treasures and artifactsâ€”you’ll find many of these just by swimming around fish and aquatic life, but the sensor is appreciated for making this easier. Second is the Pulsar, which magically heals fish simply by giving them a few jolts of energy. Realistic? Of course not, but it’s still fun when a tiger shark is about to bite you and you shock him in the face with a pulsar to settle him down and save your hide. For those who are concerned that Arika has put headshots into your calm, ocean exploration title, don’t be alarmed: these moments occur infrequently, as the game certainly isn’t all fighting off tiger sharks and the like. 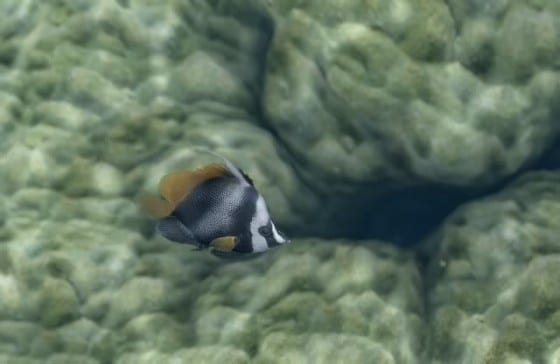 Just because the game is structured more than the original doesn’t mean you can’t swim as long as you feel like, taking your time in order to discover treasures and interact with all of the life underwater. The game still encourages you to lazily make your way through the very deep and very much alive diving stages. In order to build a better sense of accomplishment though, there’s a leveling system in place for your oxygenâ€”the more dives you complete, the longer you can stay in the depths of the ocean. It’s a good incentive to keep playing for those who need a push to keep playing.

Graphically, Blue World is superior to its predecessorâ€”everything that is underwater is beautifully rendered and detailed, and the sea life animates very well. Even when the camera zooms in close on specific areas or creatures, the visuals hold up. This may be a budget title, but its production values, at least graphically, outshine plenty of games on the system.

The one thing I dislike about Endless Ocean is the control schemeâ€”it’s entirely pointed based, as you point at the screen and then hold B to swim in that direction. Nunchuk support would have been helpful, especially with a relaxing title such as thisâ€”I just want to lay on the couch and use my thumbs for something like this, not hold the Wii Remote aloft in order to stay aligned with the sensor bar. This is more of a personal complaint than something that’s wrong with the game thoughâ€”it’s not the developer’s fault I want to be lazy. I just hope that if there’s an Endless Ocean 3, they give you the option of more than one control scheme.

Blast Factor: Endless Ocean: Blue World takes everything you enjoyed about the original and tightens up the offering with a more direct storyline, new gadgets to change up the pace of ocean exploration, and even more areas and sea life for you to discover and explore. This is not a game for everyone, but it is a game everyone should tryâ€”you never know, even the most cynical of you may enjoy the beautifully rendered environments and the calming sense of atmosphere.