It was a little frightening, between the curtains of the Huntington’s "Becky Shaw," to hear so many say "Oh, I know people like that."

After all, this relationship comedy about a psychology student striving to order her life after losing her father, features a histrionic, a narcissist, a borderline personality and a hipster with a savior complex, all going at each other full bore.

But that’s just the fun of this engrossing and consistently funny character study, helmed by Huntington Artistic Director, Peter DuBois, and written by Gina Gionfriddo, an old colleague of DuBois’s from her days at Brown University. Rhode Island is in fact, one of the settings of "Becky Shaw," and inside Rhodey jokes abound. 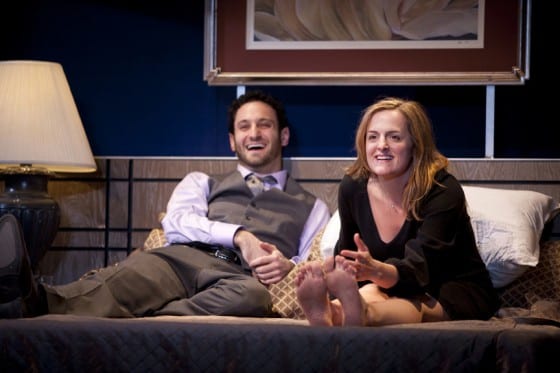 The play begins, however, in a hotel room in New York City, where Suzanne Slater  (played with intelligence and charm by Keira Naughton), a wayward PhD candidate in Psych. from a wealthy family, is having a Hamlet moment. Dressed in an inky cloak three months after the death of her father (only it’s a sexy black dress), she must confront the indomitable matriarch of her family, Susan (played by the wonderfully commanding, Maureen Anderman) who, to Suzanne’s horror, has already taken a lover. The subject at hand is no less than the division of the Slater kingdom.

In Suzanne’s case, it isn’t a Claudius, a Gertrude or a Horatio telling her to can the theatrical mourning. It is an odd duck with a smooth baring named Max Garret (played with a truly creepy mechanical cockiness by Seth Fisher). Just whom Max is, is not made immediately clear, but he is intimately tied to the Slater clan, he is a power broker with a head for numbers, and he is here on "Team Suzanne." His advice: let me handle the money, stop moping about like a child, and go get a hobby.

Suzanne heeds these pointed words, heads off on a ski trip, and, half-a-year later, she is married to Andrew Porter (excellently portrayed by Eli James) an infuriatingly compassionate writer, who longs to quit his job as an office manager and go back to the less draining (and less lucrative) grind of a "coffee collective." When Max, in town on business, stops by for a visit, Andrew makes the catastrophic decision to set him up on a date with a work friend: the eponymous Becky Shaw, an office temp with little education and less confidence, and of course, a shadowy past.

The combination of Andrew and Becky reveals Max’s full color. A chilly but effective pragmatist, the man has a lack of tact that rivals Larry David’s. Like David, his behavior is cringe inducingâ€”but he often says what you wish you could say in situations like his. It’s pretty clear that Max and Becky are not about to hit it off famously, but that disaster that mars their date is both unexpected and sobering. In its wake, the two are unsettlingly estranged, and when Suzanne and Andrew are forced to make sense of it, and to choose sides, everything about the relationships between all four characters is called into question.

"Becky Shaw" is a comedy with a lot to say. It pits some strong, well-defined and complex characters against one another, provoking challenging questions about the balance of romance and pragmatism that go into choosing, and standing by a mate. It manages to do this with jokes, and without falling back on emotive monologues.

It works because, yes, you know people like that. Which makes it funnyâ€”but maybe also a little bit frightening, if it does it’s job.

Presented by the Huntington Theatre Company, "Becky Shaw" plays at the B.U. Theatre through April 4.