Coming to the underwater first-person-shooter will be additional characters, trials and an increased level cap up to 50. 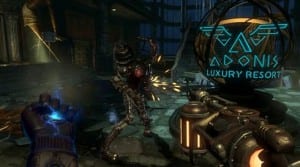 More of this, soon.

The DLC is called The Sinclair Solutions Test Pack and will sell for $5 on both Xbox Live and the PlayStation Network next month.

“The fans who waited in the snow, rain and cold for the midnight launch of BioShock 2 have spoken and their message is that Rapture still has many fascinating stories to tell,” said Christoph Hartmann, president of 2K. “Downloadable content is a key part of our efforts to continue to entice the fans that have made 2K a household name – we intend to deliver single and multiplayer content that respects and expands upon one of the greatest fictional worlds ever created.”