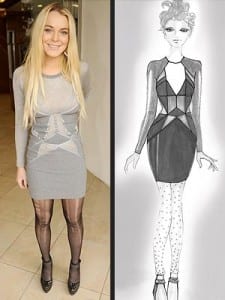 Well, it looks like my hopes were way to high for poor Lindsay. According to People.com, she’s been accused of copying designs for clothing like 6126.

Black Milk Clothing’s James Lillis has pointed out on his blog, toomanytights.typepad.com, that Lindsay’s “Diamond” leggings look a lot like his “Sheer Spartan” leggings — complete with the triangle cutout at mid-thigh. Then, Fashionista.com observed that one of Lindsay’s dresses looks just like a Jen Kao dress she actually wore last month.

"While we are all well aware that being â€˜mimicked’ or â€˜copied’ has always existed in this industry, I think the evolution of it all has grown to an alarming level,” Kao said. “It’s a shame to support the concept of taking advantage of designers who are still trying to develop a name and solidify the image of their design aesthetic."

Lindsay hasn’t spoken up, but the 6126 president Kristi Kaylor said, "The alleged â€˜copying’ claims made by these companies are false and have absolutely no merit or validity whatsoever. Any alleged similarities are purely coincidental. The 6126 illustrations for the upcoming fall 2010 collections do not even describe the fabric content, fit or actual construction details of the garments. This is merely an accusation based upon a pencil sketch with no concrete viable evidence to back up the allegations."

Seems a little sketchy (yes, pun intended). It’s hard to tell who’s right here, but it looks like LiLo’s resolution is a bust.